A Short History of the LEGO Brick (1949-Today) PART ONE 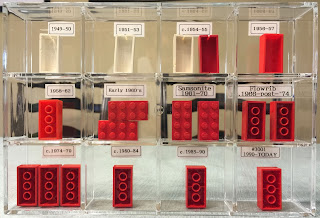 Occasionally, the historian in me gets interested in a side-tangent-project, and down the rabbit hole I go.  Often, this activity brings me quickly to a deep state of regret.  Today we are going to look at one of my recent projects, which was to see how the Lego brick (specifically, what is known as a "2x4" brick) has changed over the years.  That should be easy, right? The Internets should be full of information, right?  Well, if not...then, the official Lego website should contain all the answers, right?
......................right?


Nope to all of those.  In fact, the deeper I got, the sorrier I was that I'd ever started.  Really, there's precious little information out there, and lots of it is fragmented and built on supposition.  To my great luck, I was able to encounter a couple of experienced and knowledgeable collectors that pointed me in the right direction; otherwise there's no way I could have put this together, and I'd have eventually (gasp!) given up.

Lego collectors are an interesting breed.  In fact, collectors in general are.  Just like with anything, there are various levels and specialties, and you have to find the right people to talk to, and then talk to them.  Just to show you where I was in my knowledge at the time, I knew there had been changes over the years, but looking on Bricklink won't get you too far--there are only a few official part numbers given to this brick, which is now known as "3001," but there are myriad variations of it.  Most sellers don't differentiate, and the earliest of bricks weren't even sold in America.  They get lumped in with a catch-all part number called "3001old." In one case, I had to go to the source--a seller in Denmark--to even find one of the early ones to import!

I wanted to focus on the more major, structural, design-based changes for this project.  Otherwise, it would have gotten out of hand quickly.  For example, one website lists 42 variations of this brick, while, in discussion with other collectors, there are enough variables to factor in so that you could end up with over 100! Therefore, you can see why I wanted to hit the main points.  We will discuss these variables, and you will see what I mean.

One more note:  when it comes to early Lego, many times, dates are sketchy.  I am not, not, not saying my dates are 100%, and I've tried to put "circa" where it's appropriate.  The reason is this:  when molds changed, existing pieces were used, and sometimes even mixed in, so you can't say a design change was made on Monday, and by Wednesday the new design was in place, and all of the old version was gone.  It just doesn't work that way.  In some cases it was a matter of a few years before earlier designs had disappeared.

With all that said, let's start at the beginning: 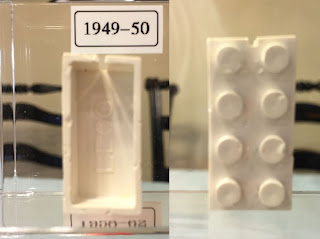 As makers of wooden toys for years, the Lego company jumped into the use of plastics in 1949, and produced their first interlocking bricks.  You will note the slot--which was made to accommodate early versions of doors and windows, which look nothing like the ones we see today.  There was no logo at all on the actual studs, but a block-letter logo (of which there are variations) was stamped on the inside of the bricks.  What's more, early bricks were made out of a completely different plastic, Cellulose Acetate, which is often called CA.  As you can see, the plastic tended to warp as it aged, rendering bricks unstackable!  These bricks were sold in and around the Denmark area. 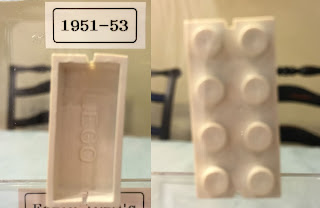 As time passed, it was decided to add a second slot, because of the doors and windows I mentioned. Early Lego was very concerned with buildings--why? Because the company produced small, Hot Wheels-type vehicles at the time! The CA plastic was still in use, and distribution began to slowly spread. 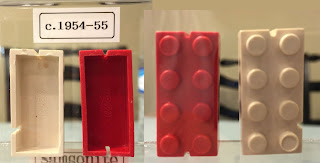 Continuing in the same direction, some variation was added to the placement of the slots--there were still two, but they could be just about anywhere.  Notice the lower right stud on the front of the white brick, which is where a pin pushed the brick from the mold.  You can also see that the logo changed, which is referred to as the "dogbone" logo by collectors.  CA is still the plastic used.  So, see? We have already had quite a few variations already, and the water is about to get much, much muddier... 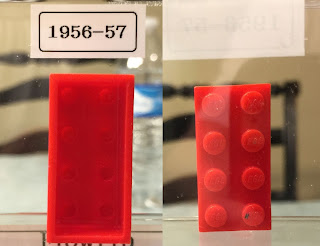 Slots have gone away, and for the first time, a logo now appears on the studs!  CA is still the plastic of the day, and now Lego is beginning to think about a better way for the bricks to hold together, to "clutch." Distribution continues to expand.  A huge change was about to happen... 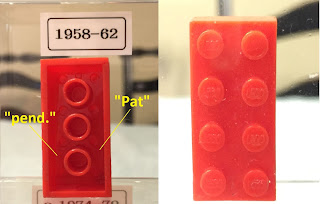 Aha, this is beginning to look more familiar.  Yes, tubes were introduced, to improve the interlocking function of the bricks.  The early tubes were smaller in diameter, but it was a step in the right direction.  This brick was still CA, but that was about to change too.
And now, a brief lesson on one of the other major variations:  the "Pat. Pend" brick.  In 1958, the Lego group applied for their first patent on their latest iteration of this brick.  Beginning at this time, they began to stamp the inside of the brick, showing that the patent was waiting to be issued.  For one reason or another, this feature will stay with us into the 1970's, as we shall see.

And then, a curious thing happened.  Lego experimented with a "sideways" logo for a short time, which you can see here.  Then, the plastic was changed, from CA (the lower brick in the photo) to ABS, or Acrylonitrile Butadiene Styrene, which is the plastic still used to this good day.  This is the upper brick in the photo, and you can see the difference in the two.  I have seen pages where people think these "sideways" bricks are from the 1950's, but it is a well-documented fact that Lego changed plastics in 1963, which therefore makes the early date impossible.

I knew this was too much to get into one post...next time, Lego breaks into America, and we look at the second half of this journey.  Be there!

Click here for PART TWO!
Posted by Sampoerna Quatrain at 09:29

Great - the "Great Lego Sets" book covers the history of the brick -has a whole page on it - but oddly kind of fudges when the tube was added. Suggestion: please edit this post to link to Part 2 at the bottom?? It's awkward, the link I followed was like "well here's part 2, IT has a link back to part 1"

Great job on all the research! I am doing a group presentation on Lego for my class. I will definitely be citing this. Do you have a list of your sources? Thank you!

Well, there are a few source links at the end of Part Two, but I also asked questions on the Bricket forums, and talked to some folks, as well as this Stack Exchange forum: https://bricks.stackexchange.com/questions/1909/how-to-tell-the-different-ages-of-pieces
Also, this site was helpful: http://www.inverso.pt/legos/Textos/bricks/2X4brick_vs02.htm
And also this:
http://lego365.tumblr.com/tagged/history

The next step was to put it all together, and start to streamline some of the dates. I hope that helps! Good luck with your presentation!