We have looked at a couple of examples from the purple series before (seen here), but the earliest American trading cards that feature Godzilla and some of his Toho kin are these series: 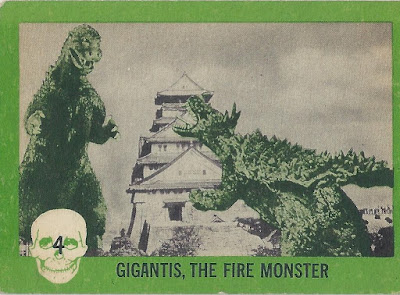 The "Horror Monsters" cards were a series from 1961, and the first half of the set had green borders, with the second half being orange.  Godzilla-related green series...or orange for that matter...seem to never come up for sale, at least by themselves, so this was a great score for me.  Unfortunately, no photos from KING OF THE MONSTERS were used, and Godzilla's popularity hadn't yet exploded with KING KONG vs GODZILLA, so the more recent GIGANTIS was used for a couple of photos. 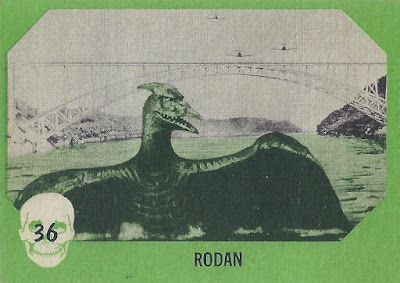 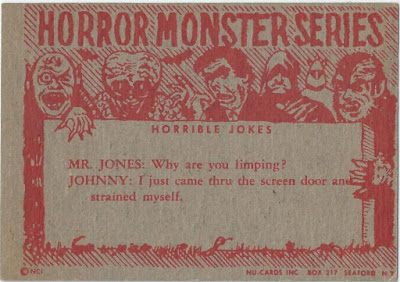 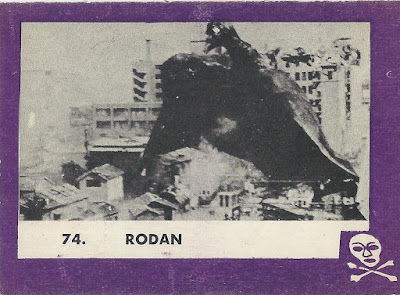 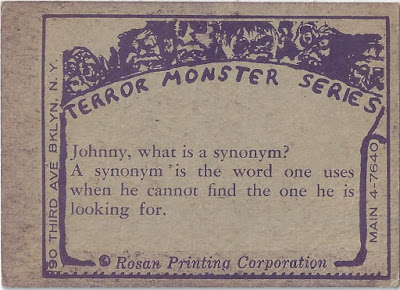 This is the "Purple Series" that came in 1963 (I always wondered if the Nu-Card company simply became Rosan later on.)

Another contemporary set with these cards was  "Spook Stories" by Leaf.  The cards are copyrighted 1961, but this is impossible, because the Godzilla photos included are all from KING KONG vs GODZILLA!
Posted by Sampoerna Quatrain at 07:43 No comments: 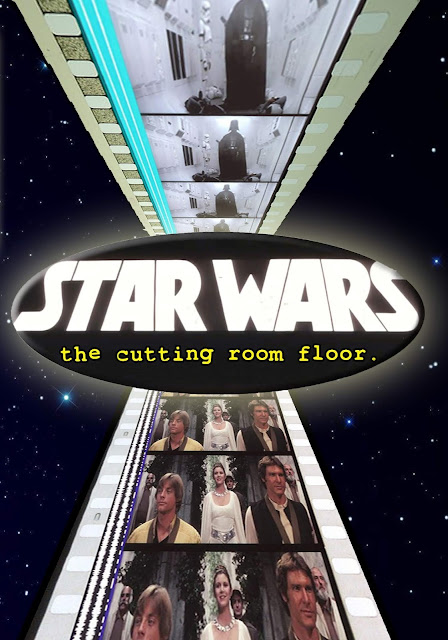 I'm pleased to announce the completion of a project that I've been working on for some time, which began with a desire to have all of the deleted scenes from the first STAR WARS film in one place.  After beginning this endeavor, I realized that I couldn't leave out the outtakes...and behind-the-scenes footage...and bloopers...and it just grew from there.  I think the description from the artwork explains it best: 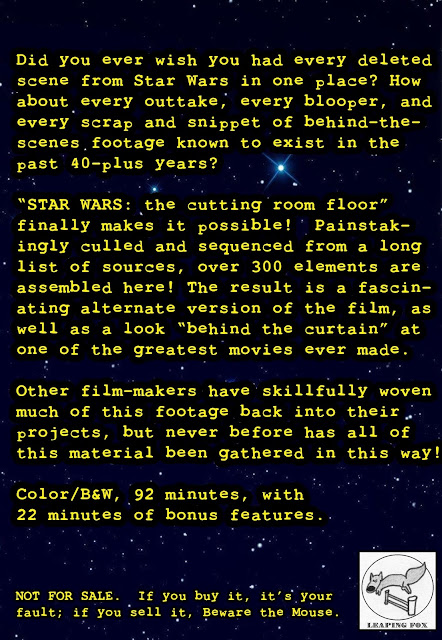 I went through a long list of documentaries, fan-projects, behind-the-scenes TV specials, DVD extras, and more, and edited out over 300 separate elements (ranging from 1 second to ten minutes).  Then, I assembled them in an order that follows the shooting script of the original "THE STAR WARS" film (before it became the revised 4th draft during filming).  There are certain bits that required guess-work, and were open to interpretation, so I made the best determination I could as to where each piece should go.  Sometimes, the pieces were montages from one of the sources (which are all listed in the credits), that could be left as montages, but sometimes, the montages had to be painstakingly chopped up to be correctly placed.


There are few actual, genuine "deleted scenes" from STAR WARS, but documentaries such as "Empire of Dreams" have given us scores of outtakes and alternate takes, and with original, on-set audio.  All of these were spliced out for inclusion, as well.  Blooper reels were also divided.


Lucas, amazingly, had the foresight to have an additional cameraman document the making of his film, showing us that a "Making of" TV special had been planned all along.  Although many of these shots even have sound, most do not.  In most of those clips, foley (faked sound effects done after the fact) was supplied, as it was for lots of clips in the "Making of Star Wars" TV special (otherwise, William Conrad was talking over the action, anyway).  Almost anything that wasn't genuine was removed.  Occasionally, you will hear some voice-over or narration, because removing it proved impossible or unnecessary.

To supplement the silent parts, I resorted to supplying music from the original soundtrack, to save the viewer from long silent passages. I attempted to use the "correct" tracks as much as possible, but this is not a precise science, as the viewer will see.

I divided the film into twenty "chapters," and made a spreadsheet of every clip that was used, noting its source.  (Readers of this blog know that I am always concerned with "credit where credit is due," and if a clip came from DELETED MAGIC, I notate that it did.) The spreadsheet is included, as well as a chopped-up version of it that can be printed as a booklet to store with the DVD.  The custom artwork shown here is also included in the download.

A note on the quality.  As owners of the 2011 Blu-Ray edition of the Trilogy know from watching the deleted scenes, discarded bits of 40+ year-old film will not look pristine.  In most, if not all of these cases, this is the best that we will probably ever have.  I did compare sources to each other, so if something looked markedly better in one documentary than another, it became the clip that was kept.  Every source seemed to have different aspect ratios, as well, so care was taken to bring nearly everything to 16:9 for modern televisions and monitors.  There is no "bigger" or "lesser" version of this project; purists may become distraught, but the mp4 is all that exists.

The "film" itself is 92 minutes, but along the way, some clips refused to fit into the narrative of the story, or would have bogged it down (such as the first lightsaber test footage, which was a bonus video with the e-book version of Rinzler's "Making of Star Wars" in 2013, for example), but were still relevant.  These leftover clips form a 22-minute Bonus Feature that concludes the DVD.  This will be a separate video on YouTube, but included in this download.

Projects like DELETED MAGIC and, later, STAR WARS BEGINS were life-changing gifts bestowed upon the fan community, and I wanted to give back by sharing something that's never quite been done before, and something that can sit, with those projects, beside the original Trilogy on your DVD shelf, as a supplement.  I hope that it is thoroughly enjoyed, in the "fair use" spirit in which it is intended...and I also hope that somebody takes it upon themselves to make "the cutting room floor" for both EMPIRE STRIKES BACK and RETURN OF THE JEDI...because I just don't think I have it in me.
LINK: Star Wars - the cutting room floor.
Posted by Sampoerna Quatrain at 12:59 6 comments: 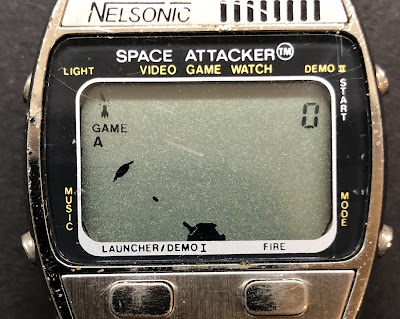 After Pac-Man hit, and the Video Game Revolution had achieved maximum velocity, you were the coolest kid in school if you owned a Pac-Man watch that enabled you to "play the game" (well, sort of...it's a topic for another time, but there was more than one out there, and all of them were lackluster...the one I owned included tiny colored joysticks, one of which broke off right away in the little controller-nodule thingy). But, there were other options out there that enabled you to own a coveted video game watch!

Thus, Nelsonic's SPACE ATTACKER watch hit major stores' "Wish Books" that fall...I would be willing to bet that mine, which I got for Christmas that year, came from the late, great Service Merchandise.

Not only did it have a light, calendar, and other digital watch features, but this watch had two things guaranteed to get every young boy into huge trouble at both school (where mine was taken away) and church (where mine was also taken away):  a cheesy video game, and a killer theme song. 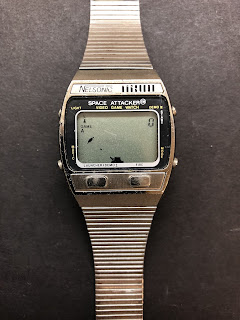 More like "ear killer theme song," because when you held down the lower-left button, a shrill, out-of-tune, ear-splitting cacophony would ring out, and instantly let people in the next county know exactly where you were at that moment.  It was bad...in fact, worse than I remembered, even.
I remember kids in school arguing over what the song was supposed to represent, but I can now confirm for you that it was in truth a medley, and consisted of:  The "Twilight Zone" theme (in completely the wrong way), The theme from the "Star Trek" original TV series, and a little of "Also Sprach Zarathustra" from 2001....then, the whole thing started over.
But, it didn't matter, because after a few ear-stabbing staccato notes from the (sort-of) "Twilight Zone," the watch was usually jerked from your wrist by a nearby adult. 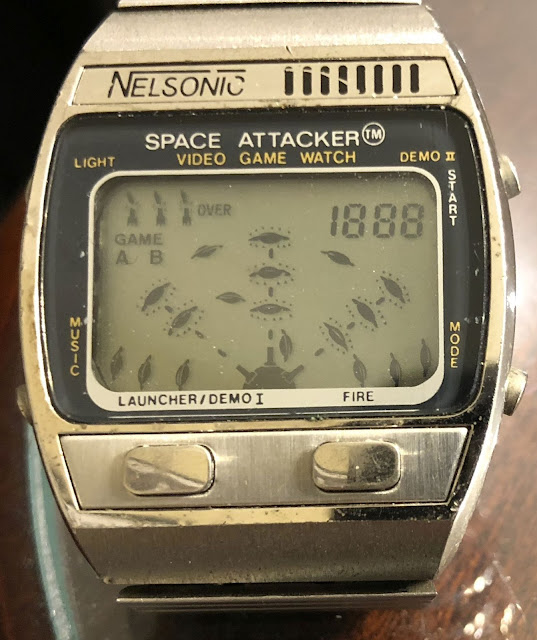 Now, understand that bumping that lower-left button was extremely easy to do, no matter how many times you were warned, no matter how you tried to concentrate and just do your math problems, it would always happen.  And, as if to really ruin childhoods everywhere, Nelsonic added another feature that meant instant punishment:  notice the lower two buttons under the screen, which are used to control the "game."  In normal "Watch" mode, if the left button (labeled DEMO I) was pushed, bumped, or breathed upon, the watch would enter--as previously stated--Demo Mode.  What the purpose exactly was for Demo Mode (besides causing spankings the world over), I have no idea, because as you can see, it showed you every position for every possible graphic in the game, which is dumb enough, but while doing so, the watch's "alarm" would ring out, as if you were being reminded to wake up.  Only, you were never asleep when this happened; you were always in church (as previously stated), school, or possibly, your great-aunt's funeral.

I planned to discuss the "game" in-depth, but it doesn't matter, because this game SUCKED.  A flying saucer would enter from one side of the screen, and pass overhead. As you can see, you are a small turret, and you have a stick representing the barrel of your gun.  You have exactly THREE positions you can be in to shoot down enemies.  Now is a good time to mention the fact that you have a PUSH-BUTTON to scroll through your cannon positions...are you in the "middle" position and you need to quickly go left?  You can't.  You die.  Are you in the "right" position, and you need to quickly go to the middle? You can't.  You die.

So, about these three positions--that means it's the same for the enemy, right? 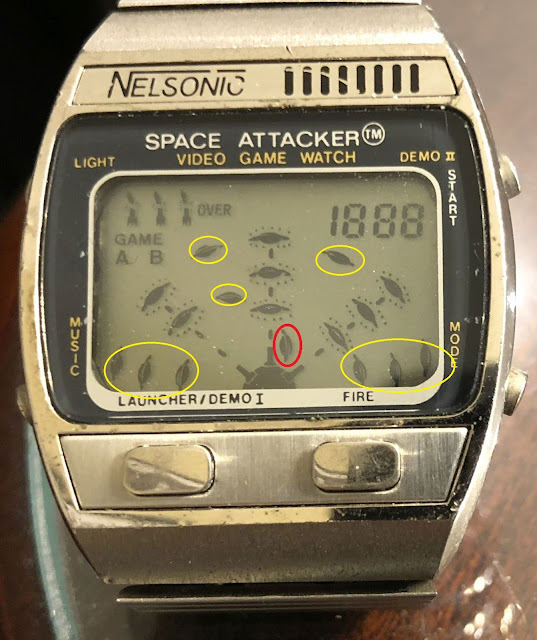 Nope, because circled in the photo above are all the places that the flying saucers can be that you can't shoot.

True, they couldn't shoot you either, from those positions, but if you will, let me direct your attention to the RED CIRCLE OF DEATH. When the game began to speed up, the flying saucers would begin to cheat.  Their favorite move was to TURN SIDEWAYS, and then just land on you and kill you instantly.  Why is that even possible? Also, notice that "demo mode" shows FOUR DIGITS for the score...it is to laugh.  "17" was a good score for this game.

If I sound bitter, it's because I continue to be, but I had the last laugh on this thing, because I dug it out from storage, had the batteries replaced, and sold it on Ebay for $150.  Take that, Nelsonic!

Oddly enough, there are clone versions out there by other companies, and the game was even brought forward and sold as a STAR TREK II: THE WRATH OF KHAN game watch...suckers.

As a public service though, I scanned the incredibly-rare instructions (admittedly, a large part of why I got so much for the watch, I'm sure), as the watch can be difficult to figure out how to set...so why not offer them here, just in case anyone needs them:

Posted by Sampoerna Quatrain at 13:14 3 comments: