Well, crap, I was going to bring in some extra stuff to scan for the blog; I'll have to do it next week.  For now, here are two treasures that came in the mail this week.  These are from a rare series of trading cards that used stills from vintage monster movies.  What I like about these cards is, they are respectful to the subject matter, and don't try to put a "funny" caption on them...I'm sure that being a child in the early 60's was very innocent and great and all that, and, while I'd buy any Godzilla-related "comedy" card in a heartbeat, they still sort of make me irate.
Anywho, let's get to the subject at hand.  Here's the first one:
By the time these cards came out, KING KONG VS GODZILLA had already happened, and Godzilla was "Godzilla" again...but this card still acknowledges that, at least in America, there was a "fire monster."
Oh, by the way, these cards aren't without lame humor, either...they just save it for the BACK of the card:

Next is another from the same series:

Aww, Baby Rodan, hatching from his egg! They grow up so fast! (Oh hell's bells, I just realized I just made my own stupid caption for this card! A thousand apologies! I take it all back.)


Unfortunately, that's all for now...there are more of these, even more from different series, and they are quite in the "not cheap" category, so I'll have to keep digging for affordable ones!
I do actually own one of the "funny" ones that I've had since I was a kid...it's hard to tell, but my assumption was that it was from "The Land Unknown," but who knows: 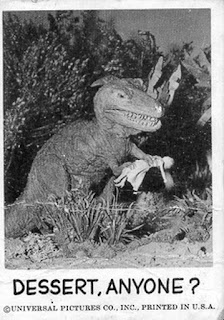 Posted by Sampoerna Quatrain at 07:50

I have a couple of these cards. 127. The Spider and Goliath and the Barbarians. I cannot find any reference to these 2 cards.

I had the same problem; there's not much information out there. You can learn more from Ebay about these cards than you can from web searches.