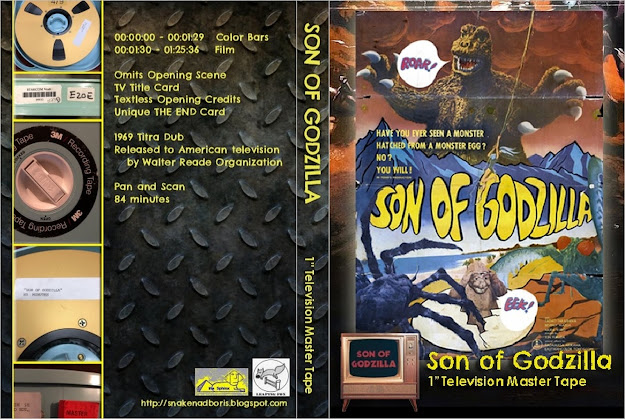 I was lucky enough to acquire a 1" master tape from a former TV station library, and get it converted to DVD.  As the film was not released in theaters in the US, the tape contained the 1969 American TV version of the film, meaning the beloved Titra dub (not available on DVD)!  There are also some other differences from the Japanese version, including:  no brief opening scene with Godzilla, a unique title card, textless opening credits, and a unique ending card.

What I haven't done is compare this to one of the gray-area VHS releases from the 1980's and 90's (of which there are only a scant few; see my page on Godzilla VHS for info).  I'm assuming companies like Video Treasures used a tape like mine as a source, but I haven't yet confirmed it.  The 1" tapes used by TV stations contained more lines of resolution than VHS did, so hopefully, even if this copy is identical, it's an improvement.

And, for a short while, it is available here: SON OF GODZILLA (TV Master Tape).  This is the VIDEO TS folder straight from the DVD conversion, so drop it into the burning software of your choice. This will not be left up as a permanent part of the blog, so grab it while you can.

Posted by Sampoerna Quatrain at 11:21

Hey, thanks for this. I love the scratchy picture which reminds me of watching it on TV.