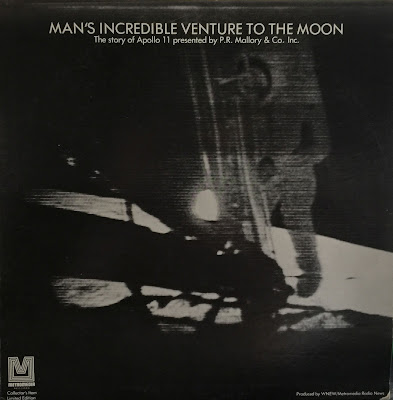 At a certain time in history, LP's and singles about the moon landing were pretty common.  Some were simply cash-grabs, and some were aimed at children.  Most of them came out during the 1969-1970 year, and that would be a good guess for this completely undated record.  Undated, but great. 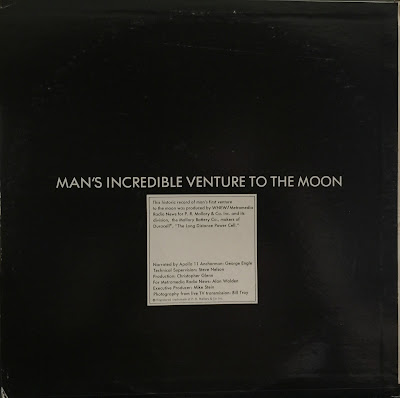 This album is one of those rare cases where everything gels perfectly.  From the sleek, all-black packaging with the photographed screen of Neil Armstrong made up of stark scan lines, to the minimalist back cover, to the documentary-like, you-are-there (because our narrator was there; he personally reported on the mission) production.  It doesn't waste time, or get cheesy, as other albums of this type might.  Some of the other records just use NASA audio like clip-art, and lack the touch of presence that is given to this production.  You come away educated, and it wouldn't surprise me that this record was used in classrooms around the country.

I enjoyed the play-by-play, chronological order to the LP, and learned some tidbits that I had never before heard. 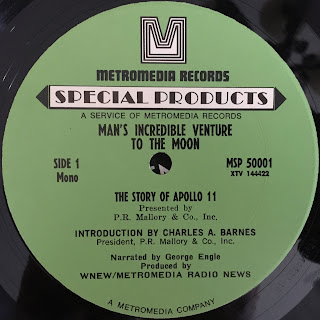 Incidentally, you'll see on the cover that the whole thing is sponsored by "P.R. Mallory & Company," and there is both an introduction, as well as an outro, by its president.  At the time, the company owned Duracell, whose battery products were, we learn, used during the moon mission!  Some brief research yielded the fact that Duracell has had two other owners since then, first Procter & Gamble, and, now, Berkshire Hathaway, who owns a myriad of other billion-dollar companies.
Enjoy!

LINK:  Man's Incredible Venture To The Moon
Posted by Sampoerna Quatrain at 07:45

Wow, that's quite a collection. Thanks for posting that. By the way, to anyone interested--the site says this LP came out in 1970, so I will update that in my post.

Metromedia as a record label didn't last too long I noticed, since, it was an interesting time for media companies to look into the recording industry.