Today we look at a really cool, but sort of out-of-left field Godzilla item that was produced in 1977, by APC (not the plastics company, but American Publishing Corporation).  Off the top of my head, it is the only Godzilla item that the company seems to have made...and, it came in two different versions.

First up is the boxed version of the puzzle, which was 81 pieces, and easier to complete.  Apparently I never took proper photos, and just nicked them from an auction several years ago, but hopefully these will be enough for you to see the puzzle. 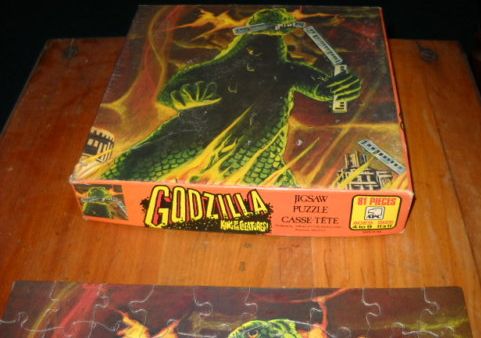 You will notice right away, when you see the finished puzzle below, that the box contains more artwork than the puzzle gives us.  This mystery was solved for me just recently, when I finally obtained the other version, which we will get to in a moment. 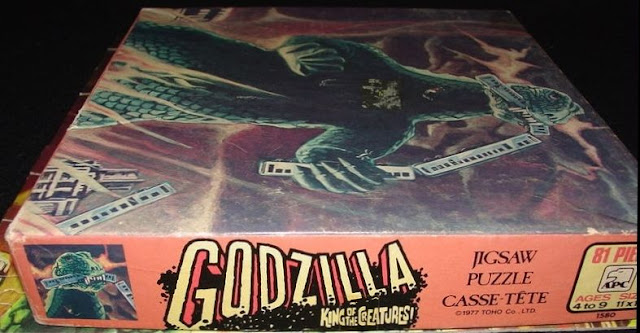 Here is the side of the box, showing the piece count of 81, and a copyright of 1977 via Toho, which should mean that our puzzle is official.  One thing that puzzles me (ouch! pun not intended) is their invention of the slogan "King of the Creatures!" instead of the tried-and-true KING OF THE MONSTERS, which has been with us since at least 1956.  (And of course, the image is certainly based on that very movie!) It's not a bad logo, and sort of has a FAMOUS MONSTERS feel to it. 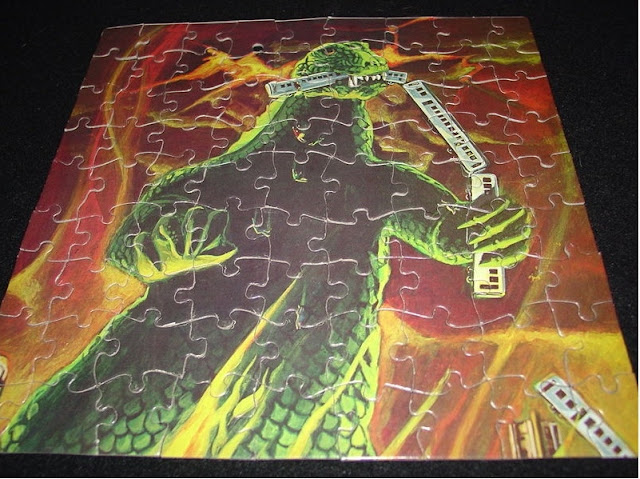 Here is the finished puzzle, which measures 11 inches square.  We don't get the complete train car at the bottom right, and there is a hint of a building, and the tops of flames...which is a perfect way to introduce version two: 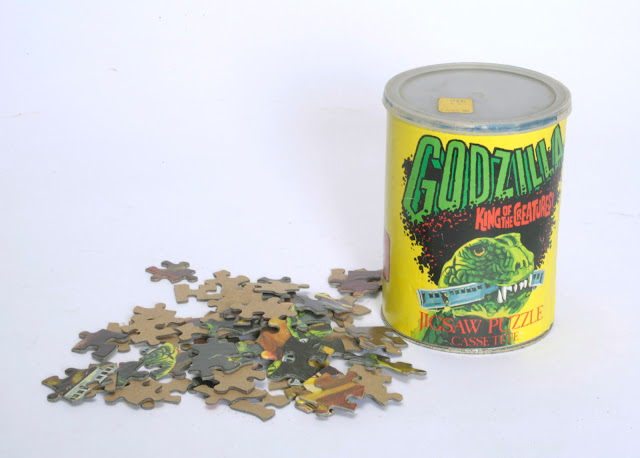 Also available that same year was another version of this puzzle, which came in about the size of a chocolate-milk-mix can.  This version of the puzzle contains 200 pieces, which are smaller, making for a much more challenging build, considering all the darkness and sky.  In fact, I probably wouldn't have completed it without the help of my daughter!
And here is the completed puzzle, which measures 11 x 17 inches...aha! It appears there was quite a bit more to that artwork after all! 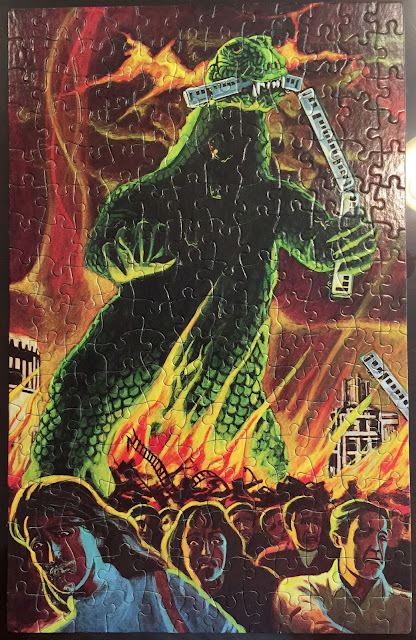 Of course, the depiction of the fleeing crowd isn't really stellar, but oh well.
One last item, the original price tag on the top of the can! 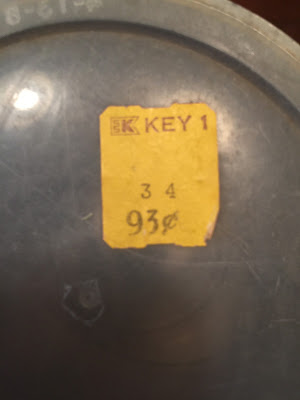 Hey, K-Mart! I remember K-Mart! It was somewhere I would go.  It was somewhere that had toys.  Now, it is just a museum of sadness.  I don't think my local store has changed the floor tiles or fixtures since I was born.
Interestingly, somebody snatched this puzzle for 93 cents, in 1977! I only paid about 75 times that!
Posted by Sampoerna Quatrain at 12:51

Hi !!! I still have the puzzle in the can from when I was a kid, miss a few pieces though. Anyway, I was wondering if you would be kind enough to post another picture of the complete puzzle but without using a flash, so there is less or no glare ?! I would like to make a poster out of it to go with my puzzle since I cannot complete it. I would deeply appreciate. Set