As Star Wars mania continues to build to a fever pitch of insanity, and break all sorts of monetary records, now's a good time to show my own collection of original Kenner toys that are still boxed.  I still have 99% of my Kenner hoard from when I was a kid, and all of the original figures, but over time I have been lucky to track down some original boxes and paperwork!


The box from Darth Vader's Star Destroyer yielded a couple of interesting moments: 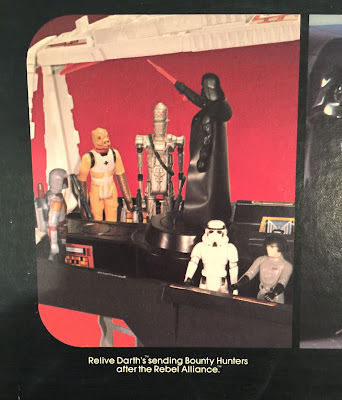 Kenner's design work was really unparalleled among toys of the 1970's.  They made it possible to bring Star Wars into our homes.  They engineered some amazing and ground-breaking things that changed the history of toy production.  This playset wasn't one of them.  It was supposed to combine the bridge of the Executor with Vader's Meditation Chamber, but it came off as a strange, triangular "playset" with two narrow channels to stand figures in, that you really couldn't do much with.  It had a handle to fly it around, but moving that wedge-shaped oddity with no walls through space seemed bizarre also.  There was even a large cannon on the front, to further confuse the children.  One of my purposes upon acquiring it in 1980 was to re-enact the assembly of the bounty hunters, but even the package shows you that you can't really do that.  And, note the text calling him "Darth" still in 1980, like that was his first name! 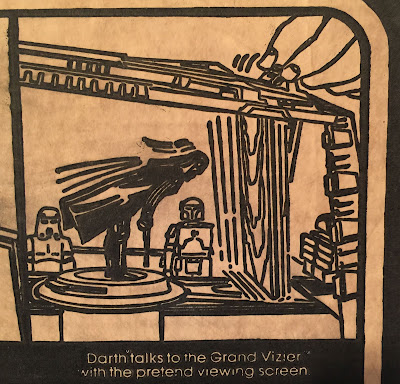 Oh well, you can always re-enact Vader talking to the Emperor, right? Nope.  This was accomplished by a red plastic plank that hung from the ceiling, right in front of the huge canon.  It's a little baffling to try and get a giant hologram (of an old woman with a chimpanzee super-imposed over her eyes) out of a plastic rectangle with wavy lines on it.
Also, "Darth talks to the Grand Vizier" is just an amazing line.  I realize Kenner was working way ahead of schedule, and subject to whatever documentation they could get from Lucasfilm, but Grand Vizier?!
Posted by Sampoerna Quatrain at 09:16

Although I live in North America, my father brought back a British version of the Death Star (top hemisphere and made of cardboard). It fed my imagination more than any other toy in the Star Wars line. What dealings or experience do you have with this item?

Ah, the Palitoy Death Star, which a few years ago was a highly-desired collectible, due to it being completely different that the American version. I know at one time prices were pretty high, but all I can tell you is check Ebay to see what it's worth currently, which, with the SW-mania, it should still be holding its value!