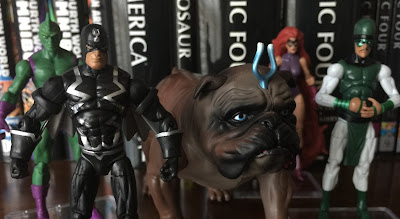 When I spout off about Marvel action figures on this blog, it's usually to complain, so when Hasbro does something right, I felt it fair that I should say something.

Even though we are still missing one of the original "Kirby five" Inhumans, Lockjaw was a necessity.  I'm not thrilled with the way he came about...in fact, all of the Inhuman releases have been weird. It took an exclusive (?) three-pack to get Black Bolt, Medusa, and Karnak, and years passed before Triton was finally put out as a single, carded figure a few months ago.  Lockjaw came in an overpriced multi-pack of leftovers from this year's San Diego Comic Con...but knowing how the action figure business works these days, that's probably the only way to get him to the fans. 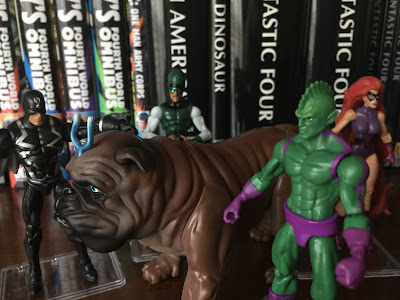 That said, he's really more of a statue, with only jaw articulation...but, he looks so good with his companions!  The good news is, you can find him for around $30-ish on Ebay, as lots of people bought extra SDCC packs to split up and sell.  I know that toy prices are getting into the range of the absurd these days, but I have to say, he's worth $30.  I would have regretted missing out on him.

I'm not sure we will ever see a 4" line like Marvel Universe (now Legends) again. It was as perfect as it was flawed, and in the years to come, will probably be regarded as one of the high points in the history of action figure collecting.
Posted by Sampoerna Quatrain at 07:38