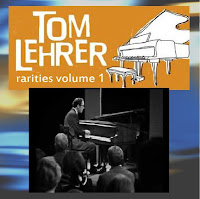 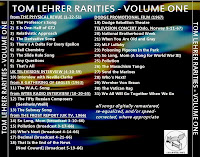 MERRYCHRISTMAS, world!
I was really, really underwhelmed with the "Tom Lehrer Rarities" disc I did a while back, and I badly wanted to re-do it. It was a quickie project...and then over the next couple of years, as new stuff was unearthed, and other, unknown stuff appeared from various sources, it became a desperate, 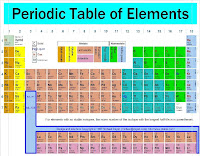 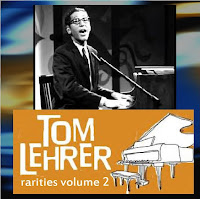 So then, here's what happened. I have assembled every scrap of TL goodness that's "out there" and remastered it...every track has been boosted, run through filters of various kinds, and overhauled in some way. In short, the one disc of rare goodness is now THREE discs of unbelievable happiness! 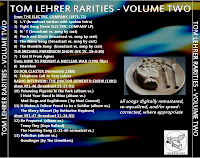 Does this mean everything sounds excellent? Of course not! Given what shape many of these recordings were in (I mean, somebody set up a reel-to-reel recorder in a corner of an auditorium in 1951 to capture "The Physical Revue," after all!), miracles can't be worked on some of these...but in the case of "Revue," I can now understand the words more clearly, so it's 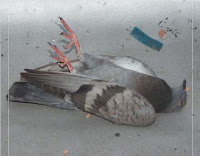 a huge improvement! (And the first 25 seconds or so still has tape damage of the magnetic kind, so nothing could be done about that!) Everything has been re-sourced and cleaned up, and even speed-corrected where needed. (There was one Frost track that was waaaay too fast, for example). Anyhow, there's nothing else like this on the entirity of the Internets, and thanks to everyone who made this possible! Therefore, if anything, let this be three things:
1) A not-for-sale tribute to the man himself,
2) A way to have every TL recording possible, [if you own the 2000 "Remains" boxe 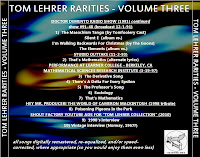 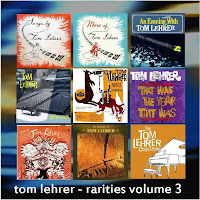 Tom Lehrer" you have it "all"] and, finally,
3) A Christmas gift to the world!
So is there more out there? Of course! (A future post will discuss this.) But rest assured that if it ever surfaces, it will be added in the future!
Not-Too-Shabby Artwork (made for clear jewel-cases with snazzy inlays!) is included in each archive!
Stay demented, folks. 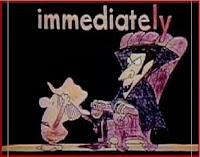 Please see other posts on this very blog for VOLUME FOUR and VOLUME FIVE, and more!
Posted by Sampoerna Quatrain at 06:47 9 comments: