As of today, I am thrilled to say, I am the proud owner of a gorgeous Mattel "World's Greatest Monsters" Rodan, made in 1979.  Shogun Warriors Godzilla is thrilled to see him! Everything you have ever read about this toy is true--it is excellent in every way, and the details are fantastic.  I am also happy to check off one of the bigger items on my want list of Godzilla collectibles! To paraphrase Percy Shelley: "If Rodan comes, can the original Ideal Godzilla board game be far behind?"
Posted by Sampoerna Quatrain at 11:31 No comments: 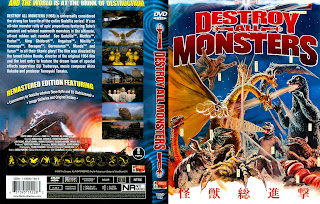 I am thrilled to say that the best release of the year finally made it to my mailbox yesterday.  Not only is DESTROY ALL MONSTERS my favorite film of all time, and not only has it been given the Blu-Ray treatment, but Media Blasters has knocked it out of the park, and far out into the universe with this one!

However you prefer to watch this epic film, it's available here! Do you prefer the International Dub (the one first released to DVD)? Well, if you do, I don't really know why, but it's here! Do you prefer the classic AIP dub, that most Americans are used to seeing--including the vocal talents of the great Paul Frees, Hal Linden, and others?? Well, it IS here, at last, available on legitimate DVD! And finally, if you prefer watching the film in original Japanese with English subititles, to get the full experience, well, my friends, that is here too.
Oh wait, there is yet another possibility in the "surprises" that Media Blasters hinted at! You can also watch the original 8 MM version of the film! This was a real surprise to me, because I could swear that my version is silent, as many kaiju reels were, (and black-and-white) but this one is in color, with sound.  I need to do some Googling on that topic, because others (like Rodan and Mothra) are silent, and usually have superimposed subtitles for any dialogue.  Either way, this was a real treat from Media Blasters, and just the tip of the iceberg--there is plenty more to enjoy. 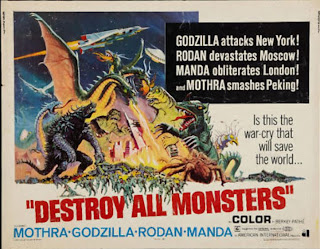 I didn't even get to the experience of watching the climactic kaiju slug-fest in Blu-Ray quality....if I go on, I will need to take another shower.  Yes, there were delays, as reported by Scifijapan.com, and for some reason, even Amazon couldn't get this to me very quickly, but THANK YOU, Media Blasters, for your attention to quality on this one!

As a footnote, by the end of the month, MB should have GODZILLA vs. MEGALON released, which will leave us with only TWO Godzilla films that haven't yet made it to DVD (which are GODZILLA 1985 and GODZILLA vs. BIOLLANTE for those keeping score).  These two have been plagued with "rights" issues, but is it possible that MB can get it worked out?

I know this wasn't so much of a "review" as an exclamation of joy, but as most retailers are NOT carrying DESTROY ALL MONSTERS (don't waste your time searching, either)---order it today!!! You will NOT be disappointed!
Posted by Sampoerna Quatrain at 07:37 No comments:

Labels: Godzilla
Newer Posts Older Posts Home
Subscribe to: Posts (Atom)
Snake and Boris welcome you to a mysterious old tavern called The Sphinx. Here we will discuss many interesting things. You will notice many signs on the wall. One says, "A splendid time is guaranteed for all," and another, "An acorn is just another nut in a beret."