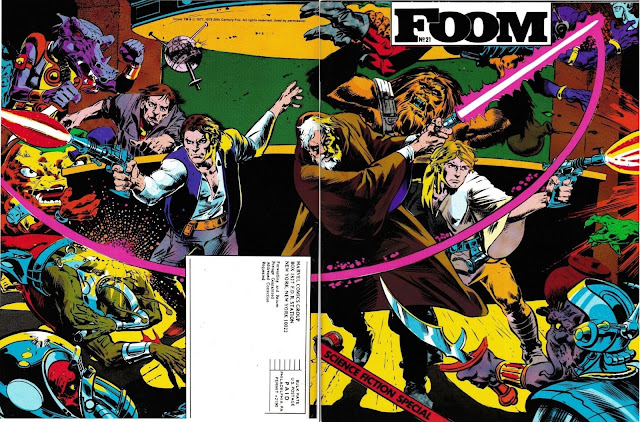 Marvel took a few stabs at fan clubs over the years, and probably the most successful and widespread was FOOM (Friends of Ol' Marvel).  This fancinest incarnation of the fan club featured a very nice, quarterly, magazine-sized publication that lasted for 22 issues.  Items associated with the fan-club, including poster sets, command very high prices to this day.

The 21st issue included a feature that showcased the rise in popularity of science fiction (I wonder why), and included interviews with each Marvel artist or writer who worked on a current Marvel title, such as SEEKER 3000, STAR-LORD, GUARDIANS OF THE GALAXY, as well as a splendid Jack Kirby interview where he details his joy at being offered 2001 and taking it to the next level--which he certainly did (and creating Machine Man in the process!). 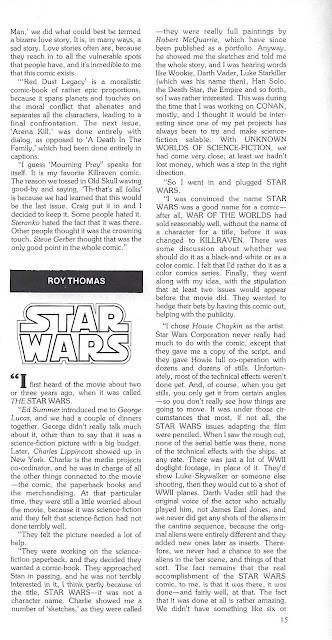 But one of the best moments in the magazine is the Roy Thomas article about bringing STAR WARS into Marvel comics.  The interview is worth reading for several reasons (in fact, there are a couple of tidbits I was looking for that will go into the next edition of THE CANTINA COMPENDIUM, see sidebar), but one of the coolest revelations that I have never heard mentioned anywhere is that he was present at the infamous "rough cut" screening at George Lucas' home, where the first, non-dynamically-edited version of the film (which still included WWII dogfight footage in place of space battles) was shown to Lucas' friends and colleagues.  This event is often referenced as a major turning point in the development of the film, and it's probably one of those moments where, if it hadn't existed, I wouldn't be typing about this film today.  It was this showing--often referred to as "confusing," or even "disastrous"--that caused Lucas to think about re-jiggering the pacing of the film, adding some much needed inserts that would be filmed in the US, and--most importantly--re-editing the film with Richard Chew and, most crucial of all, his wife Marcia Lucas.
Interestingly, Thomas doesn't give us a single adjective to let us know his opinion of how that screening went.  Instead, he uses the event as an example to show how much Marvel was required to come up with on their own, having only that viewing, the novel, and some black-and-white stills to work from! 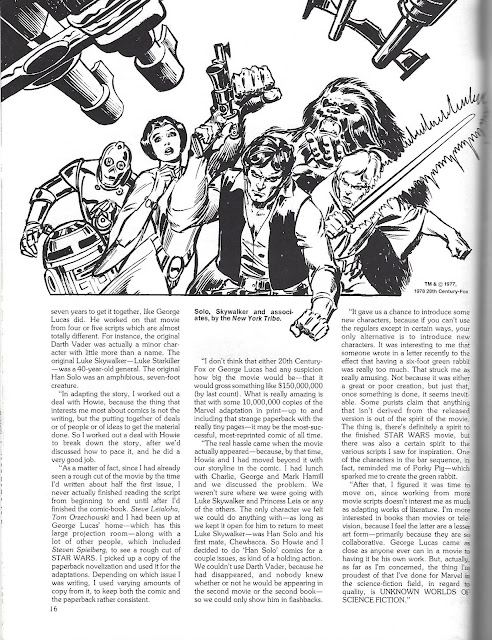 There is also a mention of Marvel's weekly UK comic titles, which included Star Wars, and necessitated some new cover art, since the stories were broken up into weekly (and black-and-white) segments. 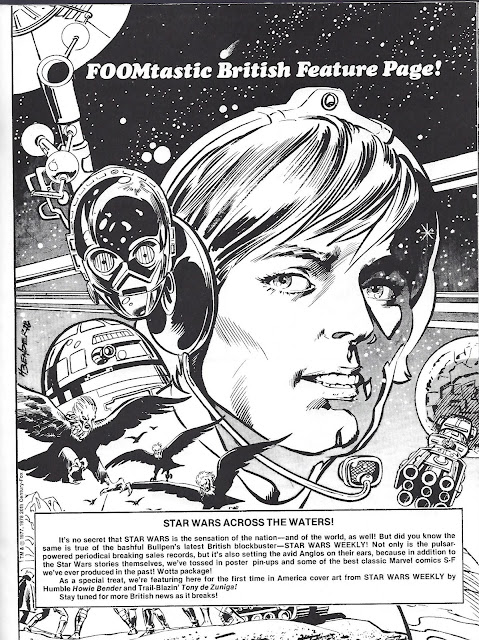 It's interesting to look back on the mid-to-late 70's, when Marvel was riding high with TV adaptations of super-heroes, and, as mentioned, a certain science fiction film that changed everything.  FOOM as a magazine was recently revived as a glossy, comic shop-publication (which included a Marvel Value Stamp, there's a blast from the past!), so it will be interesting to see if it continues.
Posted by Sampoerna Quatrain at 07:02 No comments:

In the earlier days of VHS, you may recall, there existed over-sized packaging which is today often referred to as the "big box."  Most likely, this was primarily done because manufacturers were worried that most VHS were shoplifter-sized, and could fit into a coat pocket.  (If you remember this, then you also remember that when compact discs hit the market, they were also over-packaged, for the same reason, in "long boxes".) 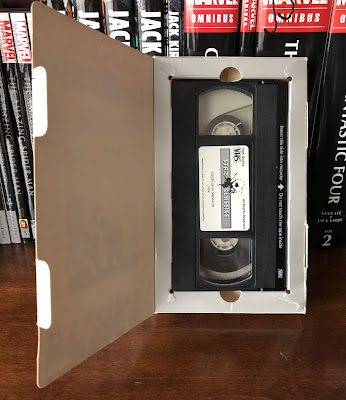 Today, we are looking at what is probably the only Godzilla film to be released in the big box format, and of course it would be GODZILLA vs MEGALON.  Issued by Star Classics in 1985, it's infamous for a few reasons, of which the packaging is the first.  Secondly, you will notice that they mistakenly used a cover photo from GODZILLA vs MECHAGODZILLA, which is bad enough, but thirdly, on the back of the box, they list the release date as being "1940." 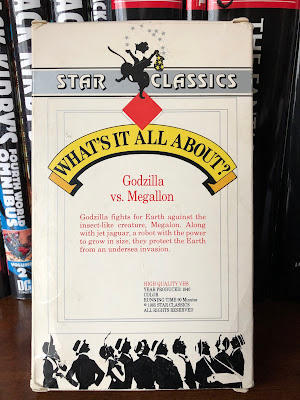 Interestingly, Star Classics--the very same year--also produced a regular-sized edition of MEGALON, this time in a yellow box rather than the light gray seen above...and, even though they flipped it,  still retained the same Mechagodzilla photo! They did fix the year, though. 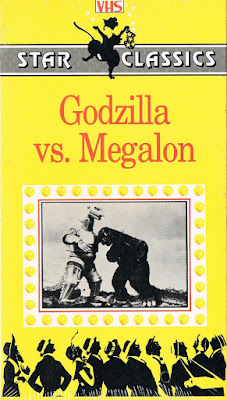 I've attempted to catalog all of the Godzilla VHS releases in the USA here:  Godzilla VHS Chronology.
Posted by Sampoerna Quatrain at 08:10 3 comments:

From THE GOLDEN MAGAZINE (October, 1969)

Recently, in the bottom of a box of random crap I got from a relative, there was a coverless copy of a kids' magazine called THE GOLDEN MAGAZINE, from October of 1969.  Even though it's several years before my time, interestingly, there's an ad AND an article about the new Saturday morning cartoon season, which was just beginning.  You will note some big names that were just being launched, in the scans below... 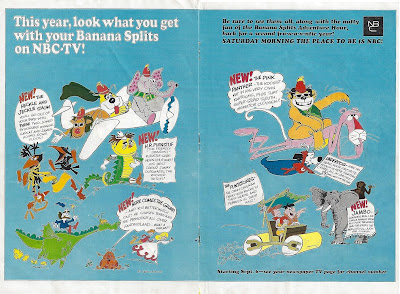 Note that in the ad above, H.R. Pufnstuf is revealed to be a "dragon." I certainly never got that out of the show...I don't know what I thought he was.  I was a Krofft fan overall, but that show always weirded me out as a kid.
Also note a couple of things that never stood the test of time, like "Here Comes the Grump" and "Jambo." Live-action on a Saturday morning...!

Here is the article about the October 1969 Saturday Morning Cartoon scene: 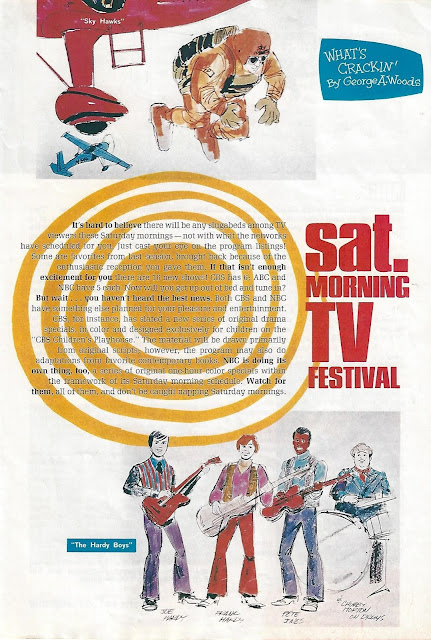 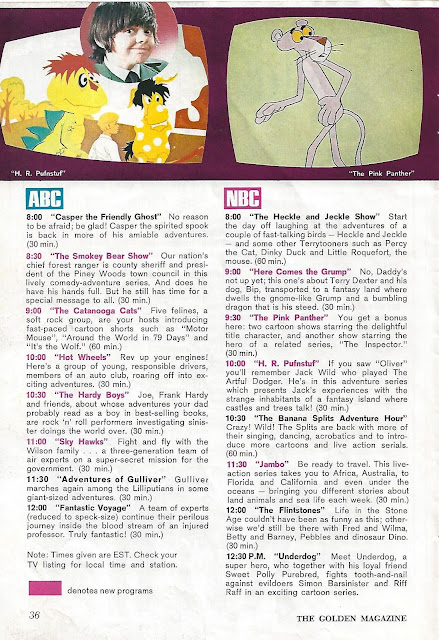 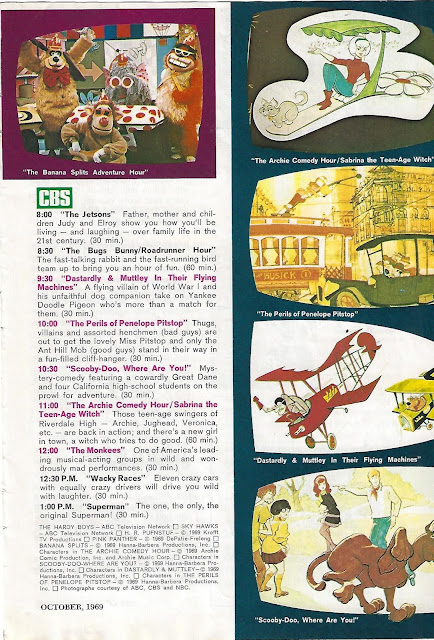 The use of mostly "production art" to illustrate these shows is interesting. That would never fly today; there's too much money at stake (I mean, they cut off the star character's FACE on the Scooby-Doo picture!!!).  Here are some observations:
*Smokey the Bear had a cartoon show? What was it, a 30-second PSA stretched out to 30 minutes?
*HOT WHEELS - The only thing I ever remember reading about this show is that it was pulled because it was discovered to be "a 30-minute toy commercial." What did they expect?
SKY HAWKS - Yawwwwn. That sounds about as boring as JAMBO.
SCOOBY-DOO - Hard to imagine a time that this was DEBUTING and wasn't a staple...notice that the description mentions that the gang are all "high-school students."  I certainly never remember that being referenced....how in the world would THAT have worked, with them driving all over Creation in a van all day to solve mysteries????

Overall, ABC's schedule looked dreadful, but I would've had a hard time choosing between CBS and NBC.  I guess I would have flipped back and forth for the likes of Underdog, the Pink Panther, Looney Tunes, Hanna-Barbera goodness, and Superman...or I could have done an Elvis and just had multiple TV's going!

Posted by Sampoerna Quatrain at 09:28 No comments:

Labels: Animation, Vintage
Newer Posts Older Posts Home
Subscribe to: Posts (Atom)
Snake and Boris welcome you to a mysterious old tavern called The Sphinx. Here we will discuss many interesting things. You will notice many signs on the wall. One says, "A splendid time is guaranteed for all," and another, "An acorn is just another nut in a beret."