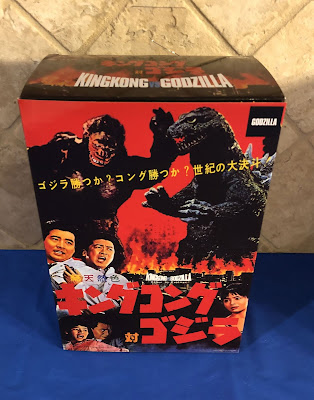 They did it again.  Just when I was miffed at NECA for doubling down on Shin Godzilla, and wasting time on spurious anachronistic repaints (seen here), their next release more than makes up for it.  Originally slated to come out last fall, the release date for this figure was mysteriously pushed to Spring 2019, to line up closer to some Hollywood movie...hmm...anyhow, the entire front of the box is the Japanese poster, so you know you can't go wrong.  Let's look a bit closer... 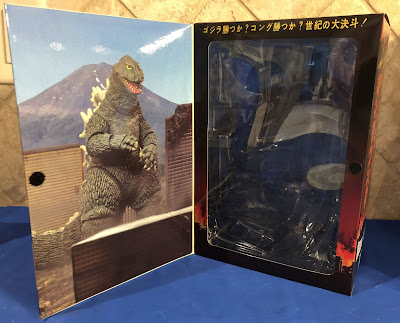 Just like the NES Video Game Godzilla figure from 2015, this new figure has a fancy window-box packaging that is quite nice.  The front is held by a velcro (TM) tab, and behind the transparent tray is another backdrop of Mt. Fuji.  I neglected to take a photo of the back of the box, but it's also amazing, with large Japanese text pointing out features (with translation beneath), almost like a vintage Toho trailer.  All in all, very fun packaging. I can't imagine anyone throwing it away! It'd be blasphemy! 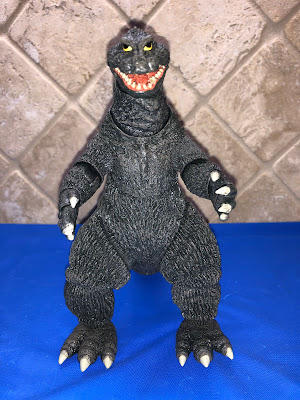 This Godzilla suit is well-beloved among fans from both sides of the ocean.  For many Americans, this thick-thighed, frog-headed wonder was their first taste of Japanese kaiju delight--and in color, even.  For the Japanese, this famous suit excitedly dared to challenge the American Kong, with a box-office record that still stands unmatched today among Godzilla films.
The figure is hefty, as it should be, and looks great. It's weird, the eyes on my figure looked completely right until I took this photo, from this angle. I don't think there's any paint variance weirdness going on; just an anomaly of view. 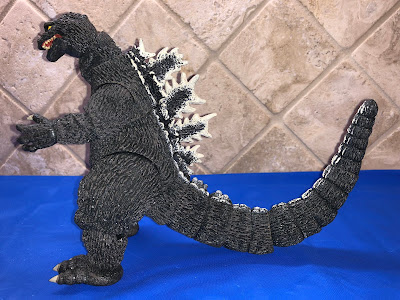 I didn't compare bodies, but it doesn't appear that NECA reused anything in making this unique Godzilla suit.  Even the tail is blunter than usual (again, as it should be)! He's just lovely. 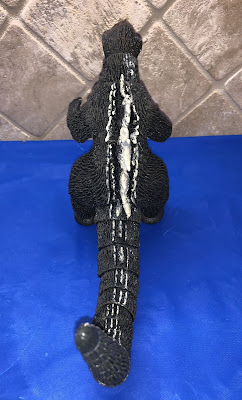 He has all the posability of the previous figures (by the way, this is figure #12 if you are counting).  What I wonder is, will he be available at Target stores? The second Shin Godzilla was said to be an "exclusive," and still ended up there. We shall see.  With the film coming up, I would bet money on it.

A couple of figures ago, NECA began to include atomic breath "beam-ray" effects, which is a nice touch.  The best part about this one is that it has a semi-circular end that fits into the back of the figure's mouth.  This holds it in place, but the figure doesn't look dumb without it.  The worst part about this piece is the completely white coloring...it would be a good spout for any whale dioramas you happen to be working on. 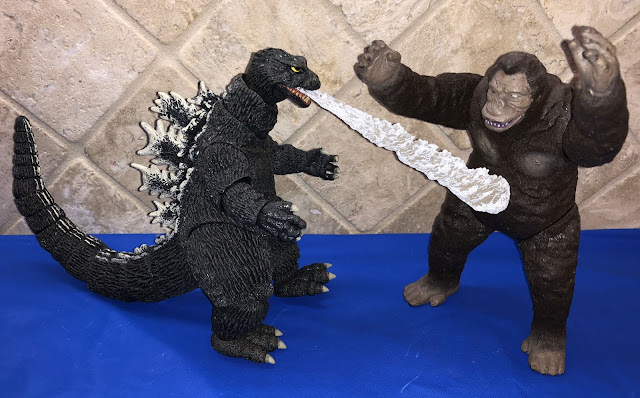 In summary, this figure is a must-have, must-buy essential.  I can only pray that NECA will stay in this vintage territory they've ventured into, and after that, give us a beautiful Godzilla 2000.
Posted by Sampoerna Quatrain at 07:20 No comments:

Do You Have Any of These Godzilla VHS Tapes From the USA?


(UPDATED Version of this post can be found here:)

This feels like one of those old comic book ads, like "DO YOU HAVE THIS RARE PENNY? YOU MAY BE RICH!" kind of thing.  But, it's true: if you have any of these American Godzilla videos, I want to buy them!!!

From my own research, these are the last Godzilla VHS that I need to complete my collection of Godzilla films on VHS! If you are interested in seeing the over 160 Godzilla & Toho kaiju VHS releases, you can view my separate page called GODZILLA: American VHS 1983-2002.

If you own any of these tapes, please contact me at samtheq@juno.com.  Even if you aren't interested in selling them, and can provide some of the unknown details, or decent scans, it would be hugely helpful.
Posted by Sampoerna Quatrain at 13:06 1 comment: