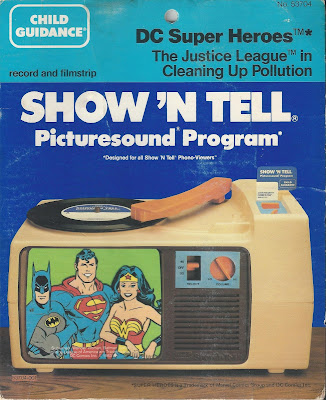 Never thought I'd run into another of these, but since I did, then you get to "enjoy" it, too! 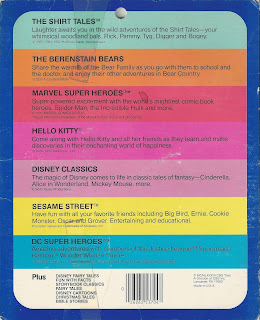 Our short and insipid adventure finds a self-declared arch villain called "The Polluter" (Pollutor?) crashing a news broadcast to say that he has placed "muck bombs" in National parks...really, it's not as interesting as it sounds.  The Justice League shows up and dispatches all three bombs (two actually detonate, but never fear), and the news broadcaster continues to narrate the proceedings as they do so.  We only hear one spoken line from one hero, and he sounds very wrong...and, who's actually speaking is a mystery to the listener (but perhaps revealed on the accompanying filmstrip). 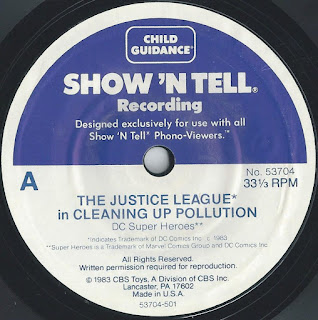 The flip side of these records was always some sort of "activity" (disguised as a "Special Mission"), the type of thing that gradeschool teachers used to play for kids in the 1970's...you may remember stomping around and causing the phonograph to skip! 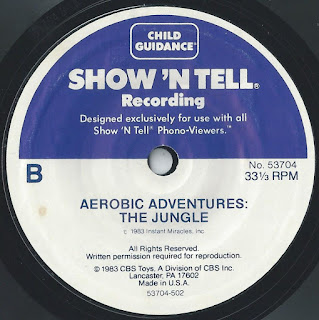 This one is called "The Jungle," and it has nothing to do with the Upton Sinclair novel.  I can't imagine that it inspired any children to do much; the narrator goes too fast and crams in too many animals (including that common, everyday jungle creature, "the owl"). The crappy way that many of these records was recorded continues to amaze me...granted, they were meant to be played on a "Show 'N Tell" machine with one small speaker!

Both sides clock in at just less than 8.5 minutes of "content."

Here's a greeting card from 1986.  On the surface, we see an airbrushed version of a well-used promotional photo of Godzilla from GODZILLA vs. THE THING.  How well-used? Here are just a few examples I randomly pulled: 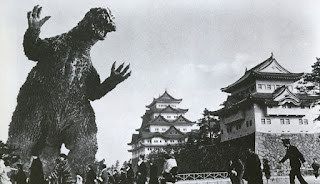 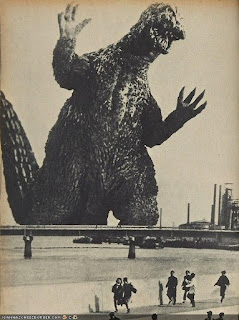 And, many more...you get the point.  It's a go-to Godzilla photo, often found in newspaper articles or books about monsters.  Anyhow, here is yet another use of it, albeit in a new way.  Here is the inside of the card:

...which is amusing, but it made me wonder what the occasion would be, where you would actually send this card to somebody.  Besides kaiju attacks, I mean. (It's always good etiquette to send a card after a kaiju attack.) But...people used to send more cards than they do now, it's a fact. Moving to the back, you'd think this was a clear case of unauthorized usage of the Big G's photo, right?

Nope.  At least, there's a 1986 Toho copyright, so that means something.  And since Ambassador is owned by Hallmark, I'd be leaning toward legitimacy on this one.  Also, is it me, or is the cute cartoon on the back by Sergio Aragones, or MAD margin fame? I'd put money on that, too!
Posted by Sampoerna Quatrain at 08:23 3 comments: 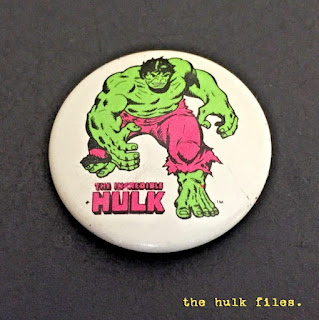 The fourth addition of my attempts at re-arranging and supplementing all of the various vintage superhero items that are out there is: the hulk files.

You probably wouldn't be too surprised to learn that there aren't THAT many Hulk songs out there.  Also, it's bad enough that the 1966 cartoons have never gotten a DVD release (they did in the UK), OR that the 1982 animated series has never gotten a DVD release (it did in the UK); even the 1996 "FoxKids" series hasn't been completely released over here (it was in the UK...sensing a pattern here?). 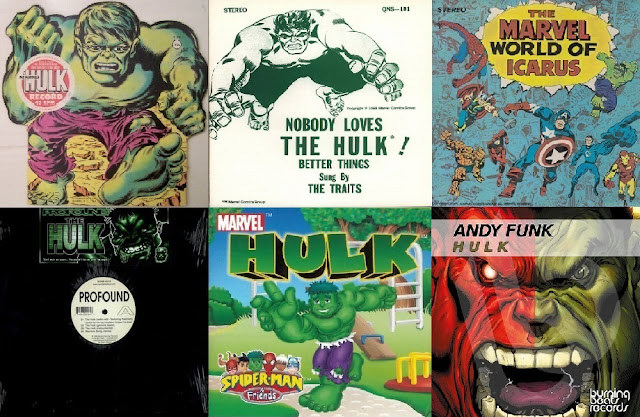 So, all of these various themes are included, including the live-action TV series also.  However, like the earlier "files" volumes, anything spoken word is skipped.  I do usually try to provide a list of those, and since there wasn't room in the disc artwork, here it is: 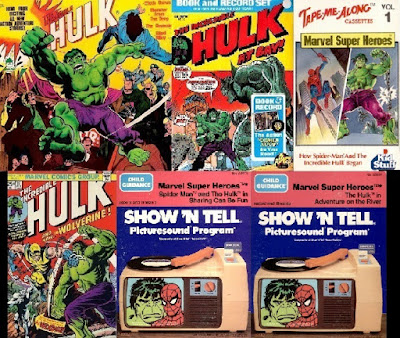 If you are looking for some spoken-word Hulk action, here's what I know of:

1) "Hulk vs. Bulk (1966)" Included on the same Tifton single as the first Hulk song was also the first Hulk spoken-word adventure, where Rick Jones watches the Hulk punch an alien blob/cloud-thing, which is an interesting idea, but rather unconvincing in its lack of believable sound effects.
2) "The Incredible Hulk at Bay!" (Power Records with comic, 1974, adapting INCREDIBLE HULK #171)
3) THE INCREDIBLE HULK (Power Records LP  #8216, 1978) 4 stories
4) SHOW'N TELL Record & Filmstrips (CBS, 1983):
Spider-Man & The Hulk in Sharing Can Be Fun
The Hulk in Adventure on the River
(and probably more)
5) "Tape-Me-Along Cassettes Vol 1 - Marvel Super Heroes: How Spider-Man and the Incredible Hulk Began"  (Kid Stuff, 1986)   longest title....ever.
6) "The Incredible Hulk #181" (Intec DVD, 2003)

I did manage to uncover a handful of interesting songs (others, maybe not so much), so please enjoy.

Posted by Sampoerna Quatrain at 11:31 3 comments: 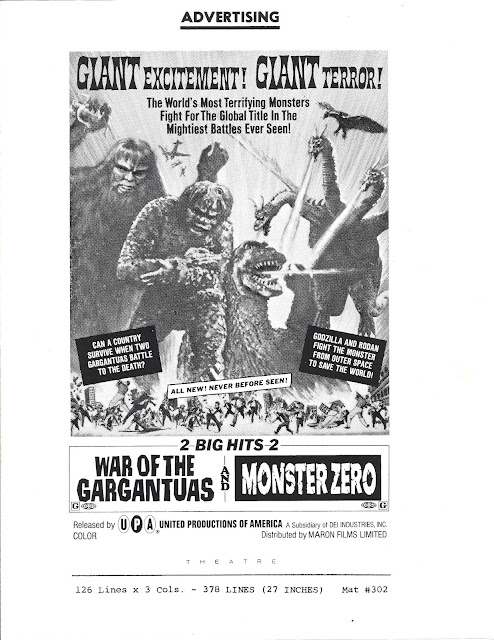 Here is a very scaled-down pressbook for the 1970 double-feature that was WAR OF THE GARGANTUAS and MONSTER ZERO.  As you have probably seen from the myriad examples of pressbooks elsewhere on this blog [click the pressbooks tag to see them all], they are very useful to help you know what items existed for certain films...but this one focuses only on the different sizes of newspaper ads. 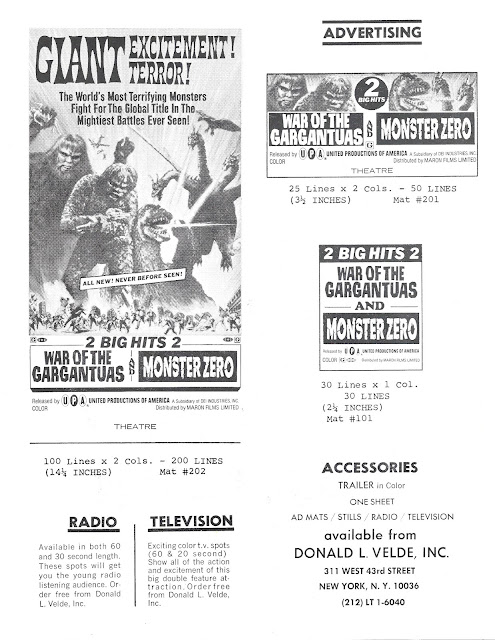 Also, this pressbook is 8.5 x 11", which, though easier to store and less likely to be folded, allows less room than its predecessors for art and text. 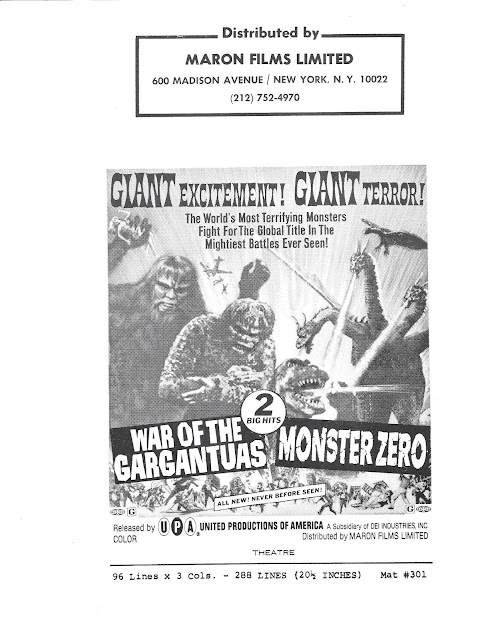 Speaking of text, there isn't much.  In fact, there are two brief synopses of the films, and only two sample newspaper articles.  These are worth reading; note the first one, which begins the ballyhoo right away, with the title of "New Science Photography Makes Monsters More Human Than People." 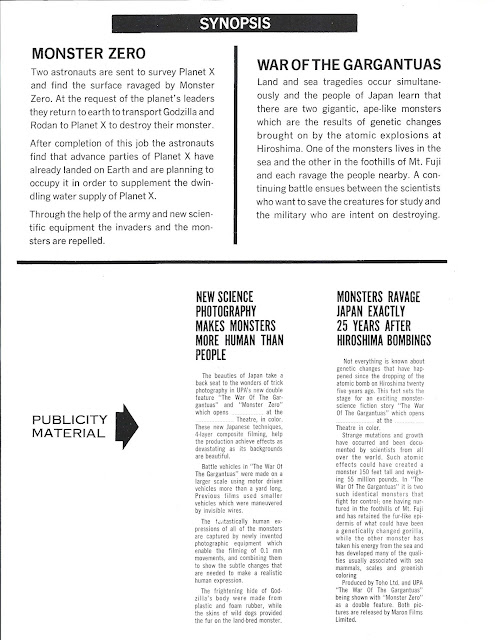 The article makes several confusing claims.  It says that military models for WAR OF THE GARGANTUAS were "motor driven" and "more than a yard long." Some were motorized, yes, but I didn't think any WOG models were nearly that big...until Sean Linkenback reminded me of the Maser cannon being pulled by the tank-like vehicle: 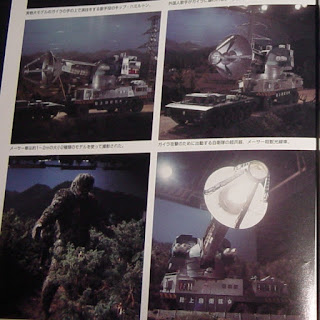 Here it is (almost) in scale with Tsuburaya himself: 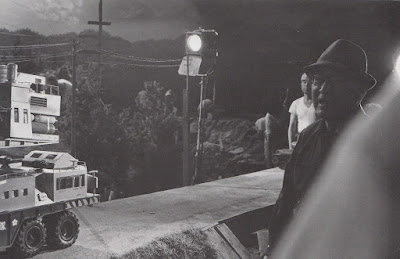 Another claim is that the previously-mentioned NEW camera equipment "enable[s] the filming of 0.1 mm movements." So, a tenth of a millimeter... with no context given as to how this would be useful, or why.  Of course, bear in mind that any "new" technology referred to is from films that were already 4 and 5 years old, respectively!

I can't let the last paragraph go by without quoting it (italics mine):  "The frightening hide of Godzilla's body were [sic] made from plastic and foam rubber, while the skins of wild dogs provided the fur on the land-bred monster."

The skins.  Of wild dogs.  Say what, now? Is this entire article was the victim of mis-translation?  Besides all that, WHO is the "land-bred monster"? King Ghidorah?...who of course is from space. [Again, Sean points out that they were referring to Sanda.  I think the real problem with this article is that they are conflating the films of their double-feature.]

I know in the beginning, I said pressbooks help answer questions about collecting movie ephemera, but sometimes they do create more mysteries and unanswered questions!
Posted by Sampoerna Quatrain at 12:55 No comments: 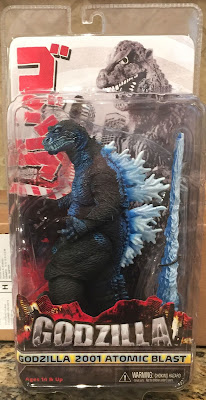 Welcome NECA Godzilla figure #10 to the world...was anybody reporting on this? I apologize if I missed it, but, I don't think anybody was reporting on this....but, there I was in Toys [backwards "R"] Us the other day, and this exists.

Is this a TRU exclusive? Who knows. All you need to know is, it's a repaint.  To be precise, it's a repaint of NECA's excellent Godzilla 2001 figure, but more importantly, it is the polar opposite of their last repaint (NECA figure #8), the abomination known as "Reactor Glow Godzilla" (which you can see in this article). 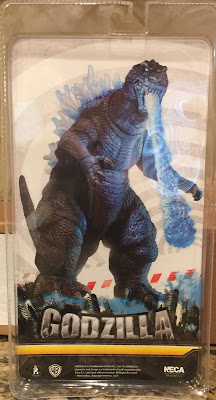 How is it the opposite? Well, first of all, this is something that actually happened in a film. Moreover, they included an accessory that we didn't previously have, namely, the beam.  If you are going to do a repaint--if you absolutely have to--then this is the way to do it.

He may be shipping with Shin Godzilla, because there was one of each figure on the shelf. I say this every time, but I sure hope this line continues.
Posted by Sampoerna Quatrain at 08:53 2 comments:

Labels: Action Figures, American Toys, Godzilla, NECA
Newer Posts Older Posts Home
Subscribe to: Posts (Atom)
Snake and Boris welcome you to a mysterious old tavern called The Sphinx. Here we will discuss many interesting things. You will notice many signs on the wall. One says, "A splendid time is guaranteed for all," and another, "An acorn is just another nut in a beret."