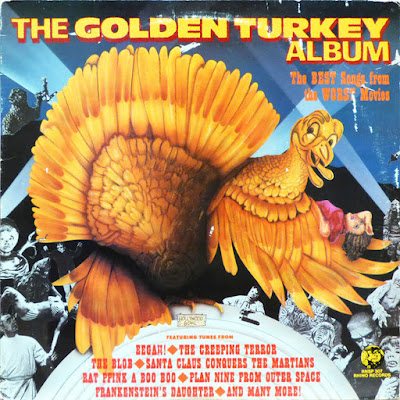 Here's something you won't find in lots of the places that you can search for stuff.  This is THE GOLDEN TURKEY ALBUM, put out by Rhino in 1985...I should point out that it's sort of a tie-in to the 1980 book (and sequels) THE GOLDEN TURKEY AWARDS by Michael & Harry Medved (which is still essential reading...I used to check it out of the public library in the summers, right under my mother's nose). 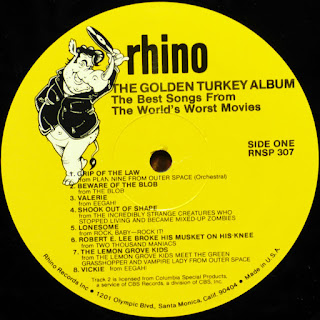 This LP isn't the highest quality audio that you will run into (several of these, it appears, had to be taken from the audio of the films themselves) due to the nature of the films involved, but it's pretty rare, and was never re-issued or issued on CD.  It runs the gamut from cool/interesting (the Criswell sample and music used as the opening in PLAN 9 for example) to just plain painful (anything involving Arch Hall, Jr. or a Ray Dennis Steckler film). 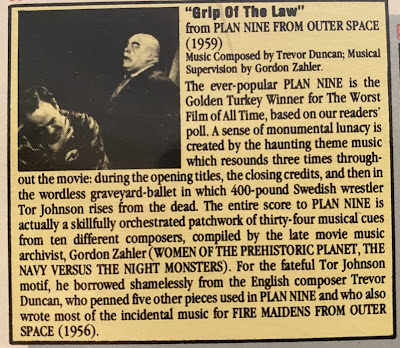 The liner notes are thorough and necessary to your "enjoyment" of this album, so I photographed them all for inclusion, because after all, you need to know why you are suffering...I find it's always better to suffer in context. 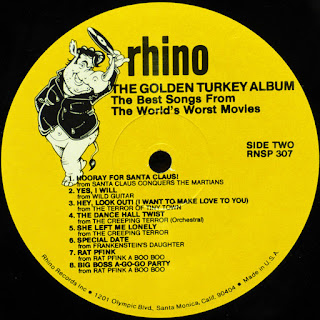 By the way, in a weird connection to this blog, Godzilla is pictured on the cover of this LP, as well as lots of other monsters and characters from random sci-fi and horror films...none of which have anything to do with the audio contained herein.  I'm sure it's supposed to be visual shorthand for "bad movie," but it'll have the opposite effect around here!

Posted by Sampoerna Quatrain at 17:49 4 comments: 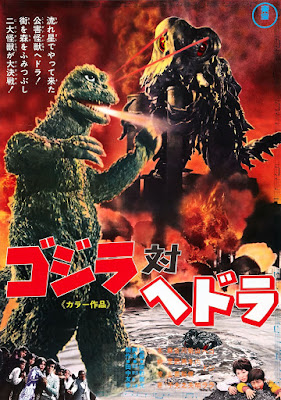 Hard to believe, but this year marks the 50th Anniversary of GODZILLA vs. HEDORAH, and therefore the title monster enemy, who's become one of my favorites over the years.  (In fact, it's July 24 to be precise!) I didn't even realize it until I saw this image on the cover of the latest IDW comic: 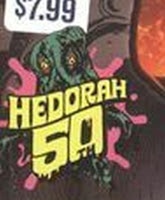 This is not one of those sites who shills, nor gets free stuff from manufacturers, but for the sake of completeness we should mention that IDW has just begun a new series of quarterly one-shots called GODZILLA RIVALS, the first of which features Hedorah himself, and while I hate alternate covers, there are two and both feature some excellent artwork! 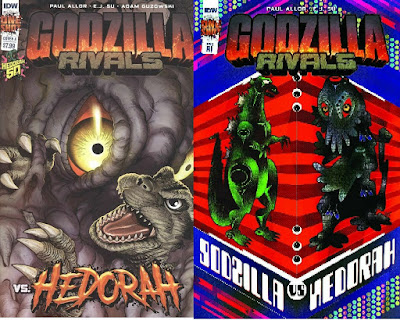 Besides calling attention to this milestone, and while we are at it, here are two appearances of the old Smog Monster himself on official album covers that you might not have known about!
Posted by Sampoerna Quatrain at 12:36 No comments:

Labels: A Public Service, Comics, Godzilla
Newer Posts Older Posts Home
Subscribe to: Posts (Atom)
Snake and Boris welcome you to a mysterious old tavern called The Sphinx. Here we will discuss many interesting things. You will notice many signs on the wall. One says, "A splendid time is guaranteed for all," and another, "An acorn is just another nut in a beret."