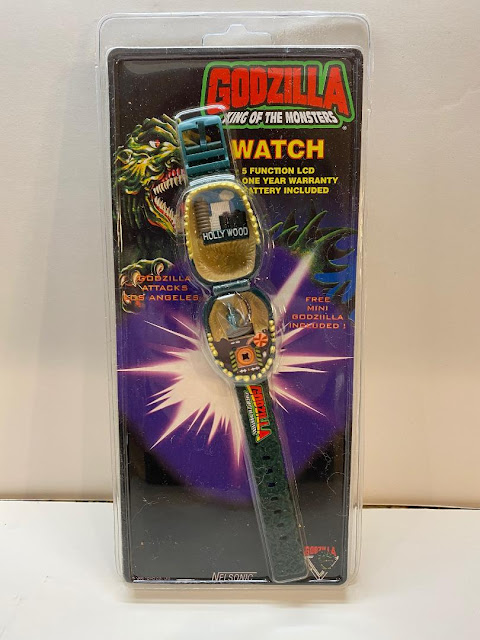 Sometimes I look to see what the most-read posts are on this site, and it never fails that one or more of my articles on the Trendmasters "Transforming Head" Godzilla playsets from the 1990's are in the top ten.  These seven playsets are among the greatest of Trendmasters' Godzilla accomplishments. [There is a post spotlighting each one; just search "Micro Playset" and you'll find them--the first one is here!] Made during the heyday of "Micro Machines," I always thought Trendmasters outdid their competition with this line.  In fact, some of them are quite rare, and I've been amazed to watch the prices rise on Ebay over the last few years. 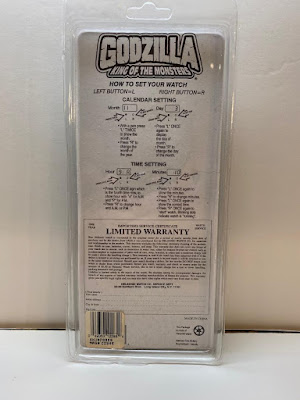 What you may not have known was that there was one additional "transforming head" playset out there...and the bad news is, it's just about as rare as some of the later playsets.  It exists in the form of a digital wristwatch from the Nelsonic company, from 1995, bearing the title "Godzilla Attacks Los Angeles."

Now, before we go any farther, you'll notice that this is packaged to fit in with Trendmasters' then-current KING OF THE MONSTERS line.  Outside, you'll also notice that the Godzilla head is a scaled-down replica of the other playsets, that matches completely. Inside, it's actually a shrunken-down version of the "Mechagodzilla in Los Angeles" playset from Trendmasters' first wave [you can compare the full-size one in this post!], down to the Hollywood sign and the stripey camouflage on the storage tank! Because of all of these things, I have no doubt that Trendmasters did the actual manufacturing on the "toy" part of this watch for Nelsonic. 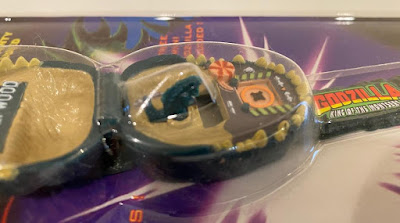 This is, without a doubt, the tiniest Godzilla in my entire collection.  You can see that he sticks into a peg on the playset, but you can imagine that he would be easily lost (by the way, that's the actual digital watch screen, to the right of the little G)!
So there you have it; this little cousin is the unofficial 8th in the great series of Godzilla micro-playsets.  It's endearing, ingenious, and completely impractical, all at the same time.  They very rarely come up on Ebay, but if you're desperate to have one, there is a foreign-packaged version from Italy (with identical contents) that does pop up from time to time!
EDIT: Here are some opened images that I found in my archive (from an old Ebay auction): 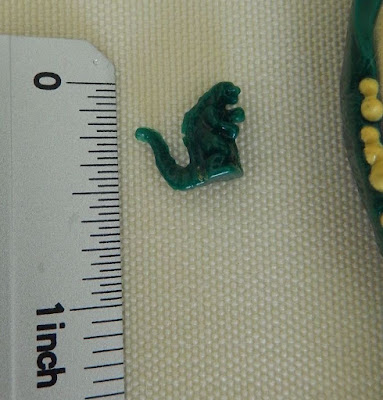 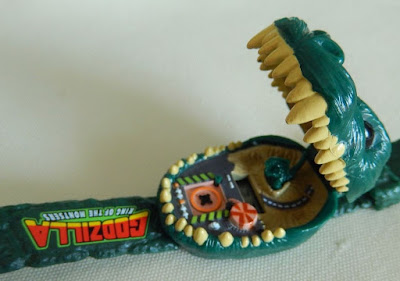 Posted by Sampoerna Quatrain at 08:53

Hello ! I was wondering if you are willing to sell the Godzilla Attacks Los Angeles watch. My partner is in love with Godzilla and I have been having trouble finding it on the market. If you are willkng, please email me at mcamtat@yahoo.com thank you

Thank you for the offer, but I'm not interested in selling at this time. The way I found it was to save an Ebay search for "Godzilla watch" and look every day.
I can give you one tip that may help: the watch was also released in Italy and I have seen it come up in foreign packaging lots more than English, so you may try looking/searching with that information.

how much you've paid for this awesome piece?

How much did you pay for it??

If I remember right, I paid about $135 for it! Remember to also search for the Italian version in foreign packaging (same watch of course)!

Do you know where I can buy it

Not at the moment. The way I found it was to save an Ebay search for "Godzilla watch" and look every day. Eventually one turned up!

UPDATE Feb. 19, 2022: Okay, folks! Since this is one of my most-read posts, I just discovered one of the Italian-packaged versions is up on Ebay! I have no connection to the auction, just FYI. It's listed under the following title: "godzilla micro battle playset LA watch toho doom rare vintage toy monster Italy" Good luck!

UPDATE Feb 28, 2022: Somebody bought the Italian example, so I hope I helped with that. NOW, there is an even rarer, American, English example that has been added to Ebay. Go get 'em!