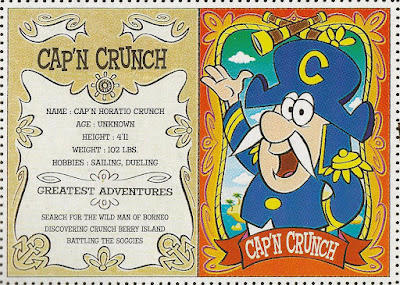 Since this has a Jay Ward connection (the original animated ads were produced by Jay Ward Productions--he did not create the character as some have suggested; instead that honor belongs to Allan Burns, co-creator of The Munsters!), we can surely cover this here.  Besides, is there a more iconic and beloved mascot than the Cap'n? He has surely stood the test of time.  And, he had an entire, developed mythos built up around him that made him all the more endearing.  What to Snap, Crackle and Pop do anymore? Well, these days, nothing, but they used to flit around like evil spirits and encourage your cereal to make noises.  The Cap'n embarks on adventures, searches for treasure, outwits pirates and enemies from outer space, baby! He's a hero. 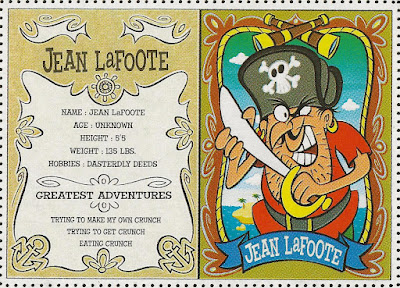 Perhaps you've wondered what his height is? Well, now it can be told that he is 4 feet 11 inches, thanks to a series of six special anniversary cards that were printed on vintage-style cereal boxes of the three flagship cereals (Cap'n Crunch, Crunch Berries, Peanut Butter Crunch) way back in 2010! Each box contained two cards that celebrated the original characters, most of whom are seldom seen today.  Characters like his original enemy, Jean LaFoote, who was around stealing cereal long before the Soggies that I remember from childhood. 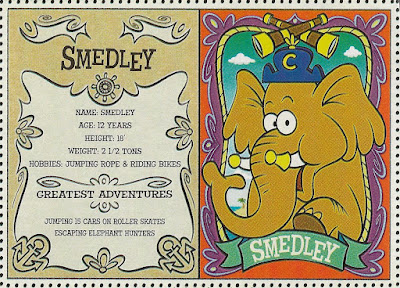 Smedley the Elephant is most often associated with Peanut Butter Crunch, but he was often along on adventures with the Cap'n.  It turns out that the names of the four sidekick kids are Alfie, Brunhilde, Carlyle, and Dave, but they don't get their own cards here! 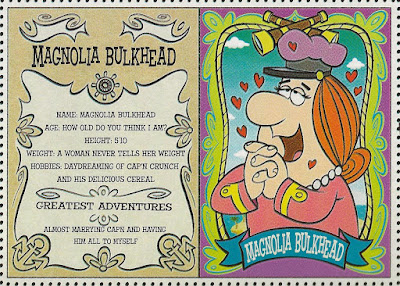 "Magnolia Bulkhead" was before my time, but doesn't the sight of the Crunch Beast bring back major childhood memories? 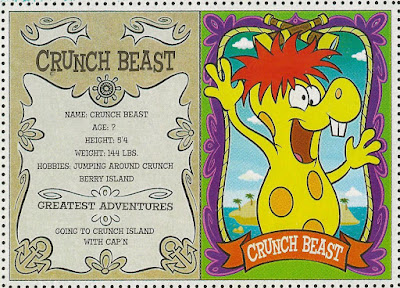 If you have never seen the original 1960's ads, I would advise that you seek them out, because they are superbly entertaining in a Jay Ward style (and you get Daws Butler voicing the Cap'n, too).  Why these were never released on a comprehensive DVD is beyond me.  They are not only well-made mini-animated features, but extremely fun.  Hey, whoever owns these today:  nostalgia sells.  It's not like anyone would pay for a disc full of King Vitamin ads. 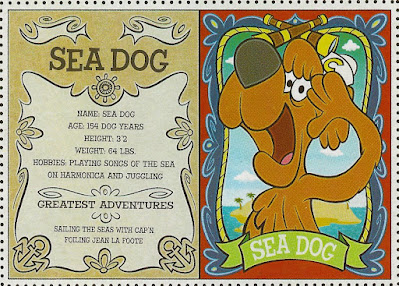 But of course, in Current Year, that's not the world we live in.  In fact, here's a look at most of the varieties of Cap'n Crunch that have existed over the years (this fan-made poster goes through 2019):
Finally, here is what the backs of the three 2010 cereal boxes looked like.  (Apologies; I had to do a bit of reconstructing because of the way they had to be scanned.)  The four plucky kids are at least included here! 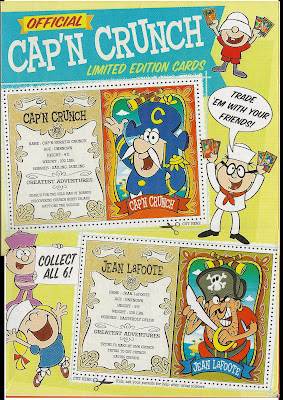 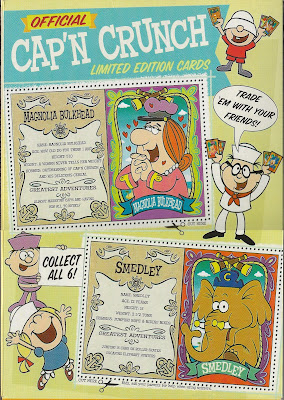 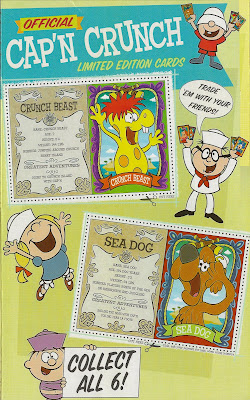 Posted by Sampoerna Quatrain at 09:15 No comments: 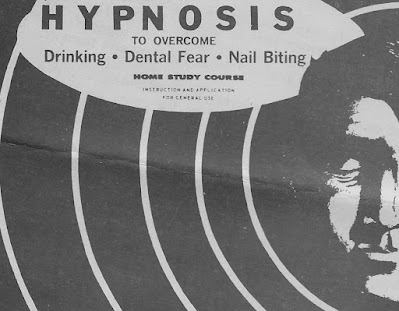 I once asked a lady I knew, who was a therapist:  if hypnosis works so well, why don't we just hypnotize people for everything? We could force ourselves to always make good decisions, always have energy, retain information like Mr. Memory, be really courteous drivers, or even just always make ourselves stay healthy...I will never forget her reply: "It doesn't work that way."  Well, okay then.

In the 1960's, though, that was sort of the mindset (let's face it:  probably because of cartoons and sitcoms).  And, there was money to be made off of this mindset...and, strangely, it wasn't to be made by health care professionals, but by record companies! Why pay doctors or therapists when you can just hypnotize yourself? (Movies taught me that all you need is a spinning, swirly disc anyhow.  And why would they lie? See SHERLOCK HOLMES AND THE WOMAN IN GREEN for just one example of this.)

In that decade, a flood of self-hypnosis recordings hit the market.  Some were sold in stores, but it seemed like many more had to be purchased from the backs of magazines, which I suppose provided a layer of protection for the sellers.  As a result, these are pretty rare today.  I pick these things up anytime I actually run across one, for two reasons:

1) They are usually completely bonkers, and
2) They provide great fodder for the occasional sample.

Today we will look at a small clutch of these rare, yet not super-valuable, in the scheme of things, records. In no particular order: 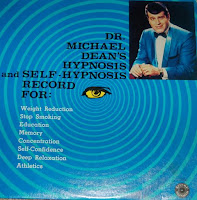 Dr. Michael Dean's Hypnosis and Self-Hypnosis Record (Revere, 1964).  I just recently found a copy of this record, but I've had it for years, courtesy somebody's blog that's not around anymore.  This one is a hoot, and provides several good opportunities for sample fodder, which I have directly taken advantage of. 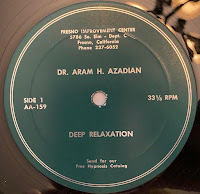 Dr. Aram Azadian - Self-Relaxation/Hypnosis for Deep Relaxation (Fresno Improvement Center, no year given).  This is a prize find of mine.  It came in a plain white sleeve, but contained a treasure trove of original paperwork! (Note, no ZIP code, which probably places it before 1963.) Looking this doctor's name up on Discogs reveals an interesting fact; his releases seem to be custom-pressed, as in, there are different combinations of sides found in the database.  I suppose you could mix and match. "I need to stop biting my nails, but also hypnotize others, please." The first side actually sounds like Stan Freberg's Lawrence Welk parody, I kid you not. 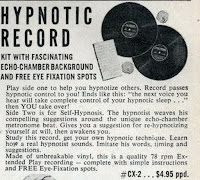 Hypnotic Record (unknown).  This is probably the oldest record in this group; nothing is known about it other than it was purely mail-order, and was an "unbreakable" 78.  Also, it would've included "Eye Fixation Spots," which I'm sorry we don't have. Both short sides are spoken over a "metronome" accompaniment, which is...bizarre. 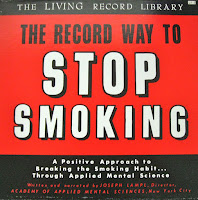 Joseph Lampl - The Record Way to Stop Smoking (Living Record Library, 1964). Another find of mine; pretty much a sham, the two sides of this record hardly add up to 18 minutes.  If I smoked, I'd start again just to spite this record. 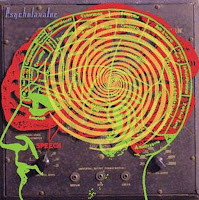 Dr. Reginald MacNitt - Psycholaxation (unknown). This one is a bonus.  It came off of the old WFMU website, which is no longer with us.  There is no information about it anywhere (if I remember correctly, it was claimed to be issued on cassette), but it's worth the price of admission.  It's such gold, I wouldn't be surprised to find out it was a well-made hoax.

WARNING: Listener beware of the somnolent tones included herein...I probably wouldn't recommend listening to these while driving, although that's exactly what I did most of the time...come to think of it, I did end up in completely different state one day, with no idea how I got there, and a better, more positive outlook on life.  Also, I no longer wanted to smoke.  Huh.

Posted by Sampoerna Quatrain at 16:47 No comments:

Labels: A Public Service, Vintage, Vintage Album Reviews
Newer Posts Older Posts Home
Subscribe to: Posts (Atom)
Snake and Boris welcome you to a mysterious old tavern called The Sphinx. Here we will discuss many interesting things. You will notice many signs on the wall. One says, "A splendid time is guaranteed for all," and another, "An acorn is just another nut in a beret."