A few random items today. Finishing up the lobby cards (for now), we have a Mexican lobby card for GHIDRA THE THREE-HEADED MONSTER: 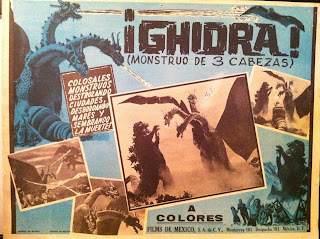 Below is a photo, horrible as it is, of a poster from Turkey.  This is one of my favorites, and it's for INVASION OF ASTRO MONSTER (which is the only English on the poster). The King Ghidorah is truly stunning. 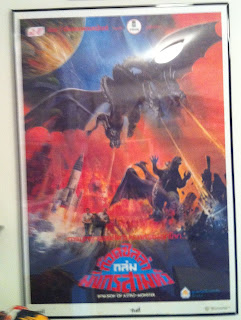 Below, the pressbook for YOG, MONSTER FROM SPACE (known internationally as SPACE AMOEBA). Pressbooks were sent to movie theaters to supply them with newspaper ads for reproduction, articles to run in their local papers, ideas for publicity campaigns, and also to show lobby cards and posters that were available for ordering. Often, they were cut to pieces, but luckily this one is intact! "SPEWED FROM INTERGALACTIC SPACE.....!" 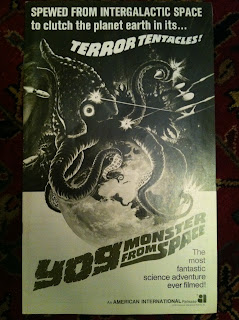 Finally, another of my favorite pieces, a Godzilla (and building!) salt and pepper set.  Believe it or not, it's an officially licensed Toho product! Those crazy Japanese; I love them dearly! 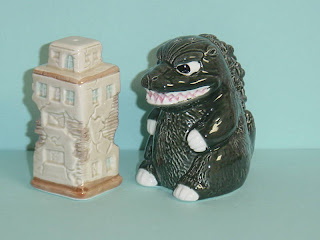 Posted by Sampoerna Quatrain at 08:25 No comments: 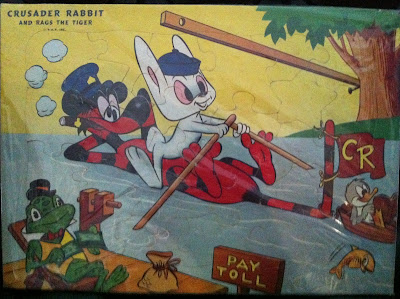 Now here's something you don't see every day...check out this awesome 1950's frame-tray puzzle that I found last weekend.  It's Crusader Rabbit, which, in case you don't know, was not only the first (arguably) animated series on television, but also the first Jay Ward series, and a precursor to Rocky and Bullwinkle! I knew as soon as I saw it that I had to buy it.
Posted by Sampoerna Quatrain at 14:09 2 comments:

Last weekend, I was re-organizing the top shelf of a display case I have, which contains a full set of vintage Kenner Star Wars action figures.  I was putting them on risers made of clear acrylic (which are actually spice racks/cabinet organizers, and are sold at Container Stores and other such places), and I was amazed how dust can get around the tiny crevices at the doors on both sides of the case. I stopped to take this picture before replacing them, and it got me thinking--I think there should be a list somewhere for folks who own complete sets.  Don't get me wrong, I'm sure there are thousands of folks who do, all over the world.  After all, they made zillions of Star Wars figures, but how many ended up lost, stolen, or sold? I'm proud of my set, and very blessed to say I haven't ever had to sell them, although I had a couple of near-disasters where I thought I'd have to! Anyway, if you are with me, and want to join the "Kenner 100 Club*," drop me a line.  I would think some photographic proof would be appropriate, so don't forget to send a picture.

*There's a bit of argument sometimes as to exactly how many there were, because of some variables, but I always get exactly 100 every time I've counted (and I'm not counting paint variations here). Some people don't count Blue Snaggletooth, some don't count Yak Face (because he wasn't technically sold in the USA), and I've even seen some disregard the Max Rebo Band 3-pack, but good grief, they are all Kenner Star Wars Action Figures.
Posted by Sampoerna Quatrain at 14:25 No comments:

Here are a couple more American lobby cards from the greatest film ever made. 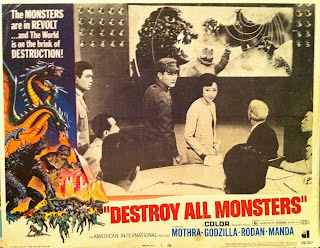 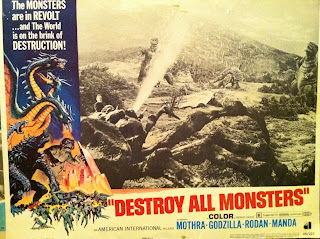 Posted by Sampoerna Quatrain at 07:36 No comments: 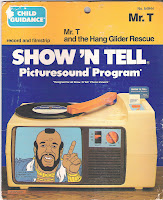 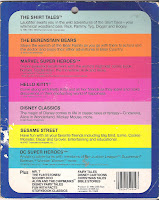 And then, there's this.
Yes, Mr. T had an animated series about this time, and yes, apparently that's what they were trying to capitalize on here...I can't decide if it's laughable or commendable that Mr. T actually doesn't speak in this "adventure," and the narrator just talks for him.  It's probably for the best, seeing as how their only option would've been to try to hire a sound-alike, and it would've been even more hilarious.
The moral here goes like this: "Kids, remember that stunt men who fly hang gliders in movies are specially trained to do this. Never, never simply grab a random hang glider you see and leap off of a cliff."
I don't remember a problem in the 80's with children wandering onto movie sets, but hey, there you go. Public service performed, and I pity the fool who tries it.
The real cringe-worthy item here is the B-side, where instead of an adventure, we are treated to a song.  Not just any song, mind you, but a sappy, over-dramatized, downright maudlin ode to imaginary friends.  I think.  Sounding like the theme to a late-70's ABC "After-School Special," or perhaps elevator music you  might have heard in Liberace's house, this one is sure to be heard once by you--just because you have to--and never, ever played again.
Posted by Sampoerna Quatrain at 08:04 1 comment:

Poor Angilas gets ambushed in this one from GIGANTIS, THE FIRE MONSTER (1959, U.S. version of GODZILLA RAIDS AGAIN).﻿

Here's an American lobby card from the either maligned-or-praised GODZILLA VS. THE SMOG MONSTER (Me, I LOVE it! In fact, this one is very high on my list, and in my top five favorite Godzilla movies!)

An exciting Mexican lobby card for PLANETARY TITANS, er, excuse me, GODZILLA VS. MEGALON.  By the way, that's another film that's both loved and hated (and also in the "love" category for me)! Mexicn lobby cards seem to very often have the picture-within-a-picture format.

And finally today, we have another American card, for KING KONG ESCAPES (1968). Nope, it's not a Godzilla movie, but it IS a Toho Classic, directed by Ishiro Honda, and includes a Gorosaurus death scene at Kong's hairy hands, as well as a Sea Serpent sometimes mistaken for Manda!
Posted by Sampoerna Quatrain at 13:34 No comments: