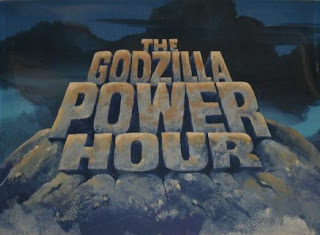 My first exposure to Godzilla, like many American children of the 1970's, was this animated series.  Even though it was strangely out-of-sync with all that I came to know about Godzilla, and more akin to Jonny Quest in style, my epiphany went something like this:  I was five years old; I woke up one Saturday morning, went downstairs to the typical 1970's behemoth, wood-paneled color television, and positioned myself in front of it, only to find (after it warmed up) the "Calico Clones" episode....yes, this was Godzilla, I knew about him! I used to go to a friend's house around that time and we would battle giant Shogun Warriors! This was the same Godzilla! It was one of those moments that you remember forever, and I still love this series.  Yes, it exists in its own unique universe and style, but I have made it a point to begin my own Children's indoctrination with it, and they have all loved it. 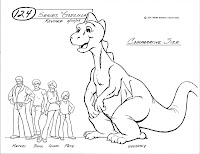 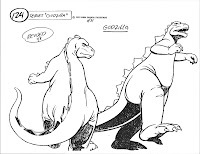 EDIT: By the way, Sony/Classic Media...will you PLEASE release the second season of this series on DVD? You've half-done the job, and now all of those are out of print.  Ok, if you did a boxed set of the whole show, I would re-buy it...but don't tell anybody! 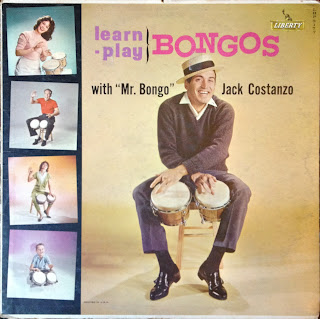 You know, recording an old LP, converting it, and cleaning it up is a royal pain--but every once in a while, I run across something that I just can't resist.  This is one of those items. 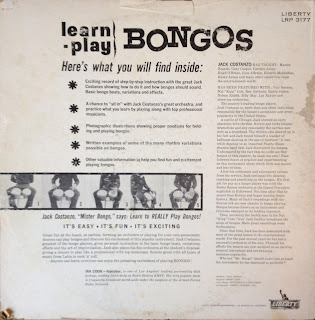 Whether you are serious about learning bongos, (and, if you require an instructional album to teach you, you have my sympathies) or, whether you are looking for some primo sampling material, or, whether you are bored out of your skull, then this album is for you.
I couldn't present it here without scanning the inner sleeve, which includes some useful information for the aspiring bongo student.....and somebody who owned this LP was, because the thing was so well-played, if was about fried.  I had to do maximum clean-up work to it! 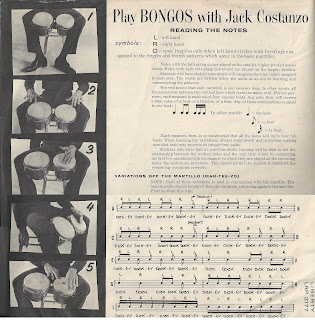 Although there is no trace of a date on this album anywhere, I learned that it was released in 1961, which would be right in the midst of the American Bongo Craze, which here we will call "Beatnikmania," and involved lots of Dobie Gillis viewers.   Other kids had yo-yos and hula-hoops, but if you had bongos, man, you were cra-a-a-azy cool. 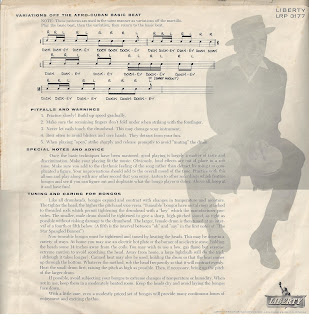 Let me just call your attention to the cover.  In a strange prediction of the artwork for Led Zeppelin's "Presence" album, we have different members of the 1950's nuclear family, all posed with the same object. But just feast your eyes on the photo at the top left:  the mother/housewife, complete with apron (only the pearls are missing, and I bet she's in high heels).  She isn't even HOLDING the bongos; they are on a stool or step-ladder or something...in fact, she seems to be pawing the air, and not even facing in the right direction...perhaps she is imagining herself strangling the husband (second photo), or perhaps his mistress.  Apparently she has run for the shelter of her "Mother's Little Helper" a few too many times that day...whether all this is a commentary on the American Family of 1961, I will leave to you, dear reader, to decide. 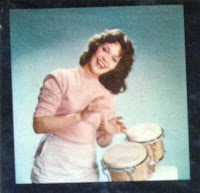 As a fun factoid of the day, "Mr. Bongo" is STILL performing and touring!
Posted by Sampoerna Quatrain at 07:38 6 comments: