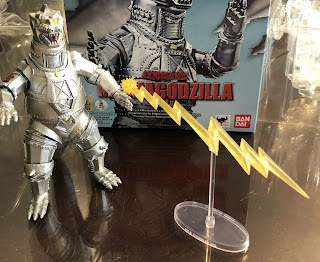 First offered up for pre-order LAST OCTOBER (that was one long wait), the newest SH Monsterarts figure, Mechagodzilla 1974, has finally arrived. And, he is stunning, which is probably no surprise. 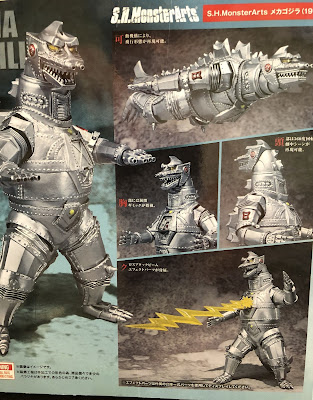 There are surprises right out of the box.  Firstly, he is painted, rather than completely molded in plastic, which means he looks amazing.  There is a sheet of soft plastic around him, even inside of the plastic tray--in fact, the only English I have seen on the instructions refers to handling the figure extremely carefully because it is painted! Clearly, they are trying to tell us something. 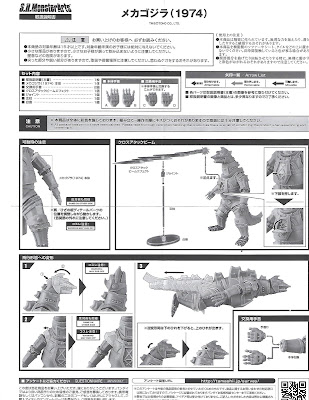 He includes an extra set of hands (that have the finger missiles already fired), as well as a lightning bolt effects piece, which attaches to a ball joint on a stand, which is pretty cool.  The little door on his chest opens for firing (mine was extremely difficult to open; I had to find the thinnest possible knife blade to slip in there, worrying about scratching the paint). 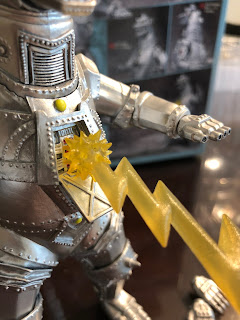 Also, as you can see in the instructions, he can convert to "flying mode." There is a switch on his neck that is disguised as two of the smaller fins; flipping it allows you to position his head as shown below.  Also, his shoulder armor also can fold down (but again, even the instructions say this can damage the paint, so why bother?) 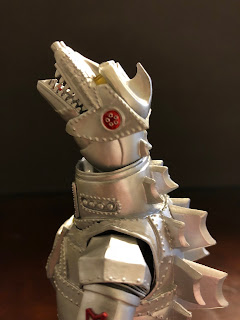 My best Mechagodzilla '74 up to this point has been the Bandai Creation vinyl from the American series, and it is honestly a work of art.  Let's compare the two: 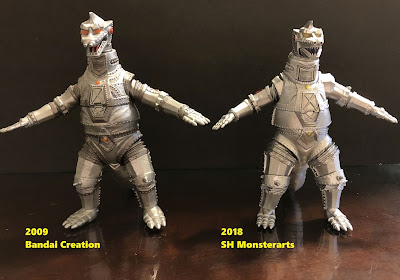 Interestingly, the vinyl is taller...the waists are at the same level, and even the shoulders are close, but everything above that is longer on the vinyl.  And, I should point out that while again, the vinyl figure is gorgeous, that is pretty much the only pose it can really make. 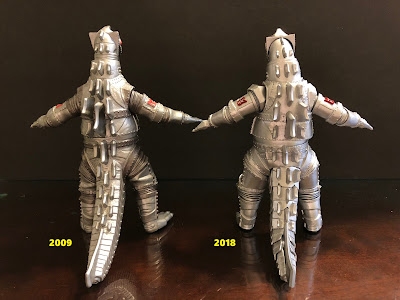 The fins are both accurate; the Monsterarts has an articulated tail, and probably more than even is necessary. 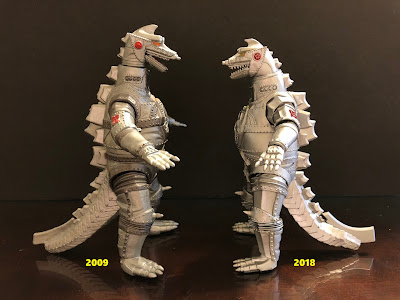 One weird thing on the Monsterarts figure are the spiked "knee pad" armor; they are actually loose, and can spin completely around.  Likewise, the flexible accordion-like connectors are either rings, or some other type of loose part, that also rattles around a little.  The soles of his feet are tiny metal plates, which was a surprise to me when I stood him on the glass tabletop! 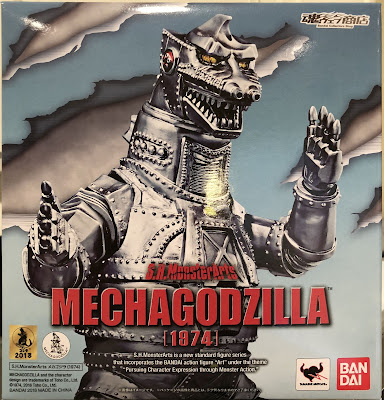 What you are probably wondering is:  is he worth $100?  ($94.99 on Amazon as of this writing.)  Well, that is rather a hefty sum for an action figure, but I would say a solid 4 out of 5 stars.  With SH Monsterarts, the value has a lot to do with what is coming in the future...they have been very short in the vintage department (they have made  a '64 Godzilla, and I think a '54 one?), but if a 1974 Godzilla was to appear, it would make this MechaG even better! I would like to say that this is the start of a vintage onslaught from Bandai (heck, I think they made every single character from the 1990's Godzilla series), but I can only hope.....it's a love-hate thing, because if they do jump into full-blown vintage, it's going to be expensive!
Posted by Sampoerna Quatrain at 08:18 2 comments:

Labels: Action Figures, Bandai, Godzilla, Japanese Toys
Newer Posts Older Posts Home
Subscribe to: Posts (Atom)
Snake and Boris welcome you to a mysterious old tavern called The Sphinx. Here we will discuss many interesting things. You will notice many signs on the wall. One says, "A splendid time is guaranteed for all," and another, "An acorn is just another nut in a beret."