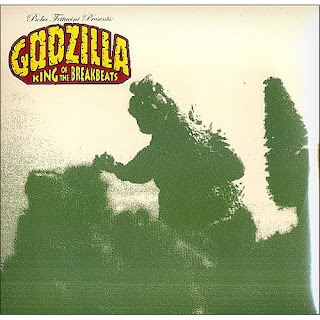 I recently discovered this one, and I had to dig deep to find a store that still had a vinyl copy for sale (which is how DJ "battle records" are released, which is what this is, so no CD's apparently). This is a newly opened vinyl copy, ripped on the first play, enhanced, and ready for your enjoyment.

This is a short (both sides are 16 minutes each) but entertaining foray into Godzilladom--which is a land I sort of live in--with ample quotes from KING OF THE MONSTERS, GODZILLA'S REVENGE, with a little MONSTER ZERO and TERROR OF MECHAGODZILLA thrown in, as well as a few other surprises. I also scanned the back cover and the record label, which is really cool.

Nothing makes my day more than a knowledgable Godzilla fan's audio creation, and I hope you will enjoy it too! If you do, you are my kind of people.

UPDATED LINK: Up From the Depths!
Posted by Sampoerna Quatrain at 10:53 4 comments: 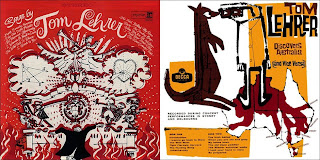 POST #100: So, you have the REMAINS OF TOM LEHRER boxed set, and you also have my 5-disc remastered version of TOM LEHRER RARITIES (available on this very blog)...what else are you missing to "have it all"?

Just this. This is a 2-for-1 package made by Neilytones, which Mr. Neilytone himself was kind enough to send to me, and I indicated to him I would be sharing it with the Lehrer fans who trapse through here! If you have any of their other releases, you know that they are always excellent, and this one continues the tradition.

These are the two rarest Tom Lehrer albums out there. You can find an LP of his 1966 remake of his first album, SONGS BY TOM LEHRER, but it's never been officially released on CD, and it never will, since Mr. Lehrer considers them inferior versions of these songs, what with little lyric changes and updates he made here and there.

However, one album you will NOT find in used shops, online auctions, or bit-torrent download sites is the second part of this disc. TOM LEHRER DISCOVERS AUSTRALIA was a live album recorded just for that country, from his tour there. While the songs are pretty much the same--and half of them were included on the AMERICAN version of TOM LEHRER REVISITED*--the introductions and monologues he did especially for the very responsive Australian audiences are purely delightful, making this essential to own.
Indeed, I was going to incorporate these albums into my RARITIES set, but as they stand on their own so well, and as this is such a high-caliber release, there really was no need! 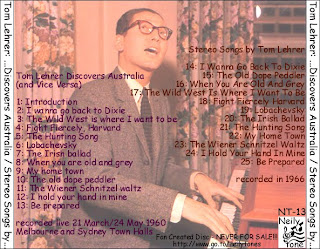 *Not to muddy the water, but the official CD release of TOM LEHRER REVISITED was the Decca one, recorded entirely at MIT. If this makes your head hurt, don't worry. With DISCOVERS AUSTRALIA, you have it all.

Posted by Sampoerna Quatrain at 12:08 27 comments:

VOICES OF THE DEAD - The Evolution of Recorded Sound (Leaping Fox) 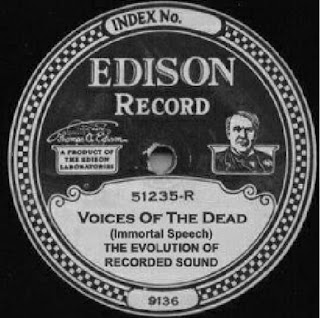 Sometimes, I get interested in something audio-related, and begin researching it...then, I start collecting, converting, and piling up files...then, I find myself cleaning up, declicking/denoising, and remastering these files...then, before I even know it, I'm making artwork, and I have another Leaping Fox compilation to share on this blog!
A recent interest was the history of recorded sound: did it begin with Edision? A long while back, I posted a couple of "oldest recording ever" files on this blog, and it was pointed out to me in the Comments that there were more to consider. Mark my words: what follows is the worst sound quality of any disc you will ever download here--but also the most historically important. I've done my best to improve each track (and some are just beyond help), and many are dramatically improved.
What follows are some unofficial liner-notes for this disc. Interested parties are encouraged to mine the Internets for further information. Oh, and before we get started, the rather morbid title actually comes from a quote from the Scientific American in 1877, when Edison provided them with a live demonstration of his new invention. This quote is included in the artwork, too.

1-5) PHONAUTOGRAMS: 1859-60
In the 1850's, a Frenchman with about seven names invented a device whose sole purpose was to make a physical picture of sound. The Phonautogram had some sort of diaphragm that moved when you spoke into it, and vibrated a bristle, which in turn made marks on a piece of smoked paper (or later wax, I believe). Anyhow, the whole point was to illustrate that sound had a shape, but it's important to point out that these recordings (a loose term here) were not meant to be played back...indeed, it wasn't possible, until a few years ago, when some clever scientists figured out a way. The result is less than stellar, but how many sounds from BEFORE THE CIVIL WAR have you heard today?
6) ENTER EDISON
Meanwhile, Thomas Edison invented the phonograph in 1877, and sort of forgot about it for a while during the development of the incandescent lightbulb. This clip is from a speech he gave in the 1920's, retelling the famous first words he recited, about Mary's lamb. Strangely, I read on two sites that his first recordings--done on tinfoil by the way--did not survive, and could not be played very many times anyhow, yet I was surprised to find the snippet I put at the end of this track. The owner claimed it was the real 1877 recording, but I am prone to believe it could easily be a re-enactment from a childrens' record or something. At any rate, it helps us imagine that breakthrough day in 1877.
7) CHARLES BACHELOR PHONAUTOGRAPH (1878)
Here's a strange track. Edison sent this guy to record the Metropolitan Elevated Railroad in New York City, because of local noise complaints, and use the Phonautograph (maybe Edison's version?) to chart the noise level. Why is this important? Because technically, it's the first "recorded" American sound in existence. You have to use your imagination to really hear a train here...sounds like crap to me.
8) FRANK LAMBERT'S TALKING CLOCK EXPERIMENTS (1878)
1878 was a busy year in sound development. Meanwhile, this guy was trying to develop a talking clock (which supposedly used a disc instead of an Edisonian cylinder), as if a clock wasn't complicated enough on its own. Right in the middle of this recording, you can hear him listing off the times ("four o'clock, five o'clock, six...") and then the recording returns to what sounds like avante garde Yoko Ono sound collage.
9-25) VARIOUS EDISON WAX CYLINDERS
So, from the late 1870's until the late 1920's ( ! ), Edison cylinders were the primary method of recorded entertainment. After that--well, there was the Great Depression--but after THAT, an explosion of technology began, resulting in the insane abilities we have today. What still amazes me was this factoid I read: the wax cylinders were difficult to reproduce beyond 20-30 times, and singers and comedians would often hang around, recording numerous takes of the same material over and over!
There were thousands of cylinders produced, and this last chunk of material shows you what some of the popular recordings of the day were like. It includes a 4,000-voice choir with the first music ever recorded (Track 9), military band songs (Track 17), vaudeville routines (Track 18), Big Band songs (Tracks 19, 21, 24), and lots of speeches from famous figures. Some were commercially available, such as Florence Nightingale, and Teddy Roosevelt's dull but squeaky ramblings, and some were personal messages to Edison--who thought his phonograph would revise the art of letter-writing--such as the one from Sir Arthur Sullivan. Other famous figures you will hear from include P.T. Barnum, Robert Browning (who can't remember his own poem), and the first U.S. President ever recorded (that survives today), Benjamin Harrison. There's a fascinating store demo cylinder called "I Am the Edison Phonograph," as well as a rare personal message recorded by Edison himself about our boys that came home from World War I. 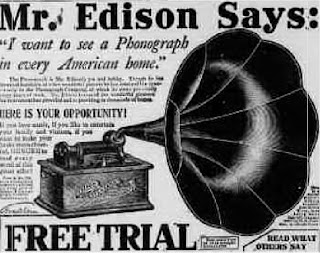 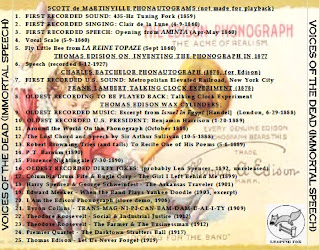 Posted by Sampoerna Quatrain at 10:43 No comments: