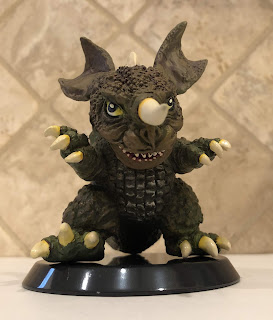 Recently, an amazing unprecedented online auction was held, entitled VINYL CONFLICT, where in two days, almost 900 lots of Godzilla collectibles were sold.  They were all from the collection of the late Mark Livolsi, and not only was I fortunate enough to participate in this event, I also was fortunate enough to win four lots of items, many of which I will be sharing here in the coming days.

Before we continue, if you have the chance, pick up the large, full-color, hardcover book that was published as a catalog for this event.  It serves as an invaluable guide to Godzilla collectibles on its own! You won't regret it.

Part of lot #678 was a series of four boxed vinyl figures from the "Super Deformed Series" made by West Kenji.  I had never heard of these, but I am extremely impressed by them.  They are around 5 inches tall, and come in ridiculously huge boxes.  Today, we will look at the first two: 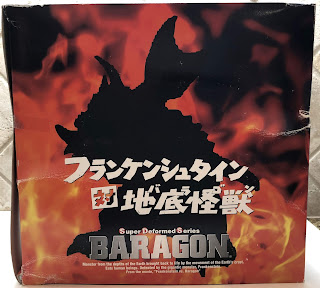 Baragon is a favorite of my entire family, so I was pretty delighted to add another likeness of him to my collection.  Each box has a character silhouette in front of a fiery background, reminiscent of the opening of a vintage Ultraman series. 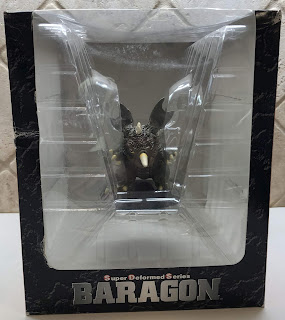 As I said, the boxes are enormous, but they do allow for maximum protection for the figure inside. 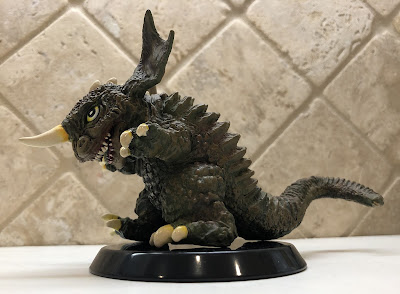 Figures also include a pedestal for them to stand upon.

This is easily my favorite of the bunch, but there are more great likenesses coming up! 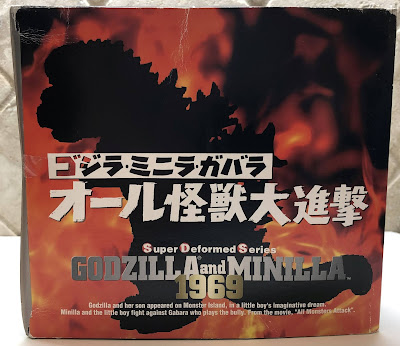 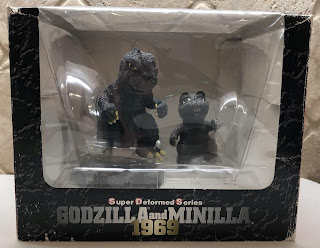 These West Kenji folks did two things very right here.  Firstly, they spared us the hideous 1967 SON OF GODZILLA suit.  Secondly, they made Minya cute.  That's impossible, you say, Minya can't be cute! He will always look like Gary Coleman to us.  Behold: 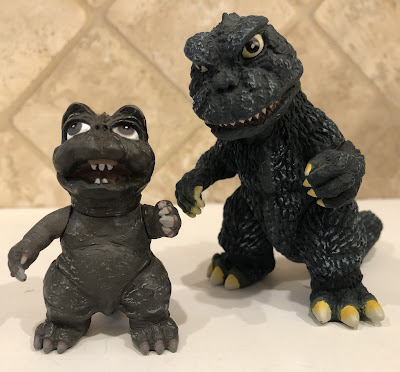 Oh my! I just met you, West Kenji, and I already love you. 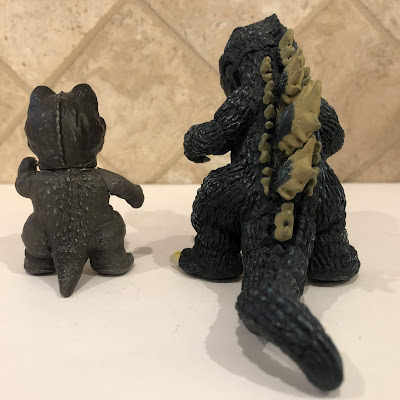 Next time, we will look at my other two figures from this series!
Posted by Sampoerna Quatrain at 13:43 1 comment:

Let's turn our attention to Gamera for a moment! Here is a really cool 4-page flyer that would have been sent to retailers in 1987.  It was made by Celebrity Entertainment to promote two of their newest Gamera releases, GAMERA vs. GAOS and GAMERA vs. ZIGRA.  I like how the front looks like a boxing promotion, showing rounds "3 and 4" (nevermind that they are out of order, as they never released all 7 vintage Gamera movies anyhow).

Page 2 is a full-page look at GAOS, with such interesting hyperbolic text as "kamikaze charm" (ouch), "whose laser mouth is bat breath gone high-tech," and "the high-camp terror of GAMERA vs. GAOS."

The films featured in this flyer would have been the "Sandy Frank" dubs, which collectors like me are used to calling the "Just For Kids" series (also distributed by Celebrity), although that logo appears nowhere in this artwork.  From my Ebay searching and Googling, I can only find GAMERA vs. BARUGON as coming out with both versions of the VHS box:  one that includes the "Just For Kids" logo, and one that does not.  Perhaps by the time GAOS and ZIGRA made it to market, all of Celebrity's Gamera movies were under the "Just For Kids" banner. I will have to keep watch in case any turn up.

Another oddity:  I have in my notes that what we know as the "Sandy Frank" dub of GAOS is, in reality, the 1960's Hong Kong dub.  I'd like to tell you which scholarly book or website gave me that factoid, but I have no citation, unfortunately.

Page 3 spotlights GAMERA vs. ZIGRA, and all I can think about is the small urchin in the film saying "I want a Coke!" It's clear that Celebrity is having fun with Gamera in these ads: "A talking shark from outer space sends Superturtle into orbit."

This would be an actual Sandy Frank dub, and a pretty bad one at that*.  Used in a quite famous MST3K, but then again all 5 of Celebrity's tapes were. 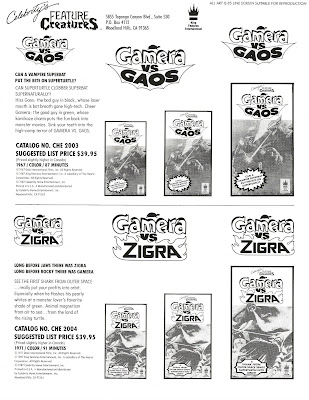 The back page repeats some of the text from the flyer, and gives the dealer a few reproducible ad slicks that they can use in their own ads or catalogs...or newsletters. You remember mail about VHS, don't you?
_______________________________
*I don't care; Sandy Frank brought BATTLE OF THE PLANETS to America, so he's tops in my book.
Posted by Sampoerna Quatrain at 10:45 No comments:

Here is one more cool vintage Godzilla card, this time a graduation card.  Once again using GODZILLA 1985 artwork (and why not? It was the latest film at the time).

Inside, "Hope you left the school all in one piece!"...again, this is a card I wish I would have received, even though I graduated several years later.

On the back, another Toho copyright, saying 1987 this time.

Are there more vintage Godzilla greeting cards out there to be found? I imagine so, and I am always on the hunt, so if any turn up, they will be featured here. Next time, a couple of not-so-vintage cards from the early 2000's.
Posted by Sampoerna Quatrain at 09:07 No comments: 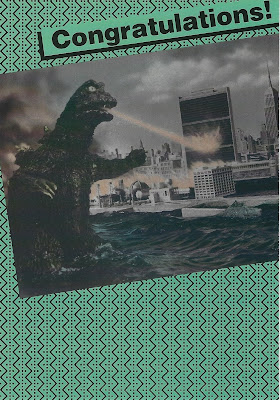 The term "greeting card" is sort of a cliche, as in this case, the item in question is specifically a "Congratulations Card."  The design is very "1987," and features a photo of Godzilla attacking New York City from DESTROY ALL MONSTERS. 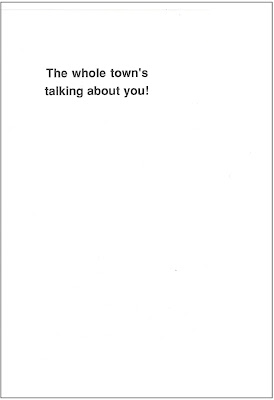 Inside (I had to add a black border, because the white card's edges were suddenly invisible on the screen), an off-centered message of "The whole town's talking about you!"....wait, is this a sarcastic card? I guess it could be. 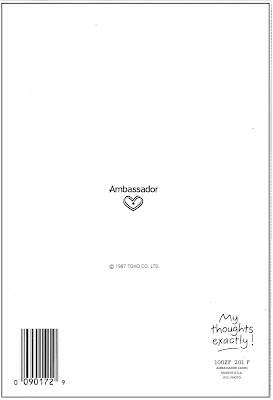 Like the previous cards we have looked at, this one is official, and credits Toho. (Otherwise, as protective as Toho is, we would be sending Ambassador a card much like this one: "the whole town is talking about you.")
Posted by Sampoerna Quatrain at 09:05 No comments: