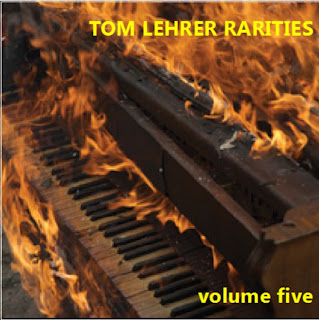 The wait is over.  The bad news is, this looks like the final volume in this series, unless I can track down the handful of elusive bits that are out there, somewhere on the planet. (Discussed below.) 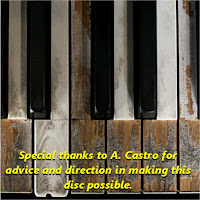 As I mentioned before, Sphinx patron Arthur Castro's help was invaluable in pointing me in the direction of the full Bob Claster tapes (which have been cleaned to remove the tape hiss, and boosted a bit), as well as the two parodies that Mr. Lehrer prepared for Garrison Keillor's "American Radio Company" show, both for the Thanksgiving holiday. 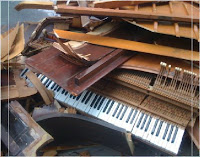 Not only that, but he also was kind enough to point out that there were TWO performances of the "Hey Mr. Producer" show (sounds like a volume of HEY, MR. SPACEMAN, now that I notice it).  The one recorded for album release was the NIGHT BEFORE the one released on video.  Therefore, we now have an additional "Poisoning Pigeons" to enjoy. 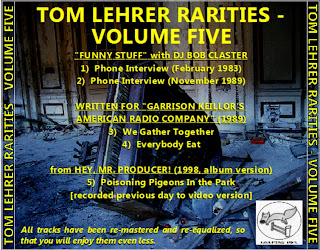 While we are on the subject, and as I prepare a package to mail to Mr. Lehrer, let's briefly discuss what's left "out there" that would make a splendid Volume 6:
1) THE REMAINDER OF "THE PHYSICAL REVUE"  This exists, and I would hope the owner of the very old wire recorder-made tape would be interested in me improving it, as I did the rest of the songs (see Volume One).
2) "THE SAC SONG" The Tom Lehrer Discography website says there's a soldier who claims to have a recording of Mr. Lehrer performing the whole song, perhaps as a guide for the film-makers working on "A Gathering of Eagles."  Who knows if this is even true.
3) WTBS INTERVIEW (October 20, 1965)  The rest of the tape that gave us "The Subway Song" contains at least one further in-studio performance.
4) "WITHOUT AN S" Ah, the "lost" Electric Company song.  I can't tell you how many VHS tapes of old episodes I have dug through trying to get lucky here, how many fruitless trades, and how many Internet Search Hours I have wasted.  I have researched this quite a bit, and I can tell you it was sung by the great Rita Moreno, it was a parody of a song entitled "Without a Song" (which may be the reason for its elusiveness: rights), and that it was aired in one of the early seasons.  The hunt continues.
5) "TREES" This was a song that was newly-recorded for the REMAINS OF TOM LEHRER boxed set, and then not used.  It WAS, however, issued on "promo cassette" versions of the set.  I seem to recall reading it was a cover, but I can't find my source at the moment.

There you have it.  Worry not; I'm on the case. 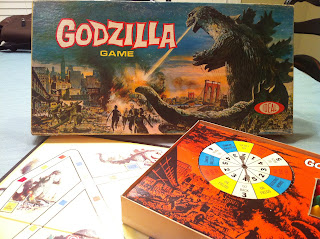 I have added one of the Holy Grails to my collection, the GODZILLA BOARD GAME made by Ideal in 1963.  Not only does is this game rare as hen's teeth, and not only does this game boast gorgeously beautiful artwork, BUT I read on one website that it was the second Godzilla item ever produced, barring one tin toy in Japan. More importantly: the FIRST AMERICAN GODZILLA ITEM!
Now, common sense tells us that this might be a bit of an exaggeration...you mean by the third Godzilla movie, Japan, toy geniuses of planet Earth, had only made one Godzilla toy between the years of 1954 and 1963?   But I digress, let's talk about the game! 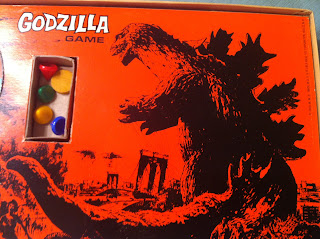 I have to be careful not to drool on it.  It's just that lovely to behold.  It's wonderfully complete--I have seen some on Ebay that came with an instruction sheet, but mine has the instructions printed on the inside of the box lid. The game was made during the excitement surrounding KING KONG vs. GODZILLA, which, as I've said below, was a big hit on both sides of the ocean.
I'd be remiss if I didn't plug the great Vintage Board Game Guru I bought it from--if you are looking for a vintage board game,  you absolutely must check out GAMES GONE BY and talk with Desi.  Not only does he have a huge and amazing collection, and literally wrote the book (two, in fact) on the subject, but he also has an entire page of classics for sale.  You'll be glad you did! 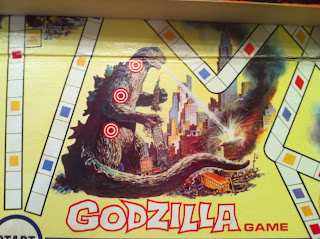 Posted by Sampoerna Quatrain at 19:05 13 comments: 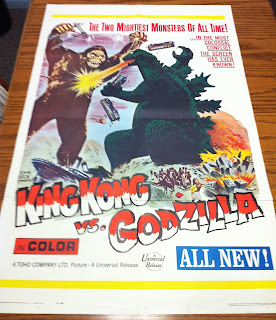 I'm happy to add the eleventh vintage American Godzilla movie poster to my collection--this is a spectacular poster that I recently picked up (it was a Christmas present, in a roundabout way), and it's in excellent condition.  Not only was this iconic film the first Godzilla film in color, and the most successful of the series in the United States, but it, more than any other, cemented Godzilla into American culture permanently.
Posted by Sampoerna Quatrain at 20:10 2 comments:

Labels: Godzilla, Movie Posters, Vintage
Newer Posts Older Posts Home
Subscribe to: Posts (Atom)
Snake and Boris welcome you to a mysterious old tavern called The Sphinx. Here we will discuss many interesting things. You will notice many signs on the wall. One says, "A splendid time is guaranteed for all," and another, "An acorn is just another nut in a beret."