Here is a really cool item I bought last week on Ebay.  This is a small, folded flyer for an independent movie theater that was given out for advertising purposes--it had information about upcoming movies with dates.  I'm sure these were printed by the hundreds.  It measures 8 1/2" x 5 1/2", and is double sided. Here's the front side: 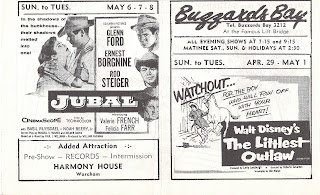 Nothing too interesting so far, but look what the entire inside is devoted to! 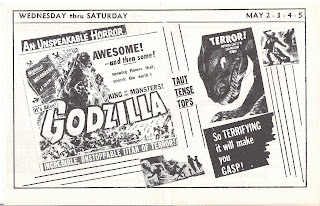 Oh yes, yes indeed--for four glorious days, you could see KING OF THE MONSTERS! So far, this is the only 1956 item I own for the first Godzilla film, but here's hoping I live long enough to score the poster one of these days!
Posted by Sampoerna Quatrain at 16:33 3 comments: 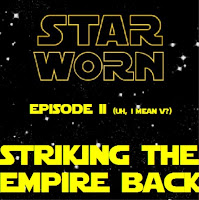 This is the second installment of my celebrating the vintage era of Star Wars...and I've noticed something funny. The farther away you get from 1977, the fewer cheesy television appearances/variety-show satires/kids' show tie-ins/rip-off radio singles there were...almost as if, after EMPIRE, everything suddenly got serious.  Does this show a changing entertainment culture, perhaps? I don't know, but compare it to now, when Star Wars is just about a parody of itself....did I just type that? Oh dear, oh dear. We'd better just move on. 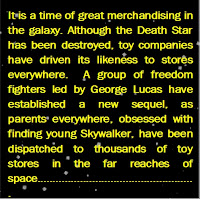 Anyway, this is almost one big sound-collage, because this time around, I interspersed the musical tracks with excerpts from the ESB read-along, as well as the "Story of ESB" album.  This way, it tells the story, albeit in sort of a fever-dream fashion...but, if you didn't know what the second film was about, would you be coming to this disc anyway to find out? Nah. 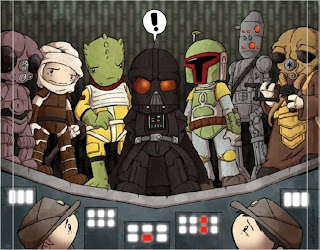 Basically, this disc is as if 1980 called and left you a voice mail.  It's all here:  the Muppet Show, the Great Space Coaster, Atari, some great vintage ads, our old friend Meco, and some other rarities as well.
As always, I've boosted sound, done my usual round of de-clicking and de-noising, and tried to make everything sound as good as possible.  I leave just about nothing in the way of gaps, because my intention is to burn the disc with nothing (zero seconds) between tracks.  That gives it the non-stop, sound collage feel. 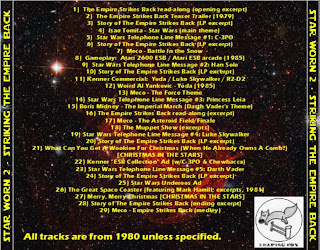 Let me illustrate with a story:

Imagine going back in time, and walking into your old living room. There, in front of you, is your 7-year-old self, drinking in Mark Hamill's visit to The Great Space Coaster.  You tap this child on the shoulder, who is startled to see you, but angrier to be interrupted.
"I am you from the future!" you announce.  "Tell me, did you ever want the ability to record this bit of Star Wars history, to archive, and enjoy it again?"
"I wanted to see it now," says the child, "but you showed up."
"No, seriously!" you say.
The small you points to a behemoth Betamax unit, which is the size of a midget's coffin, atop your large, walnut-stained Zenith television.
"Oh! You tried to use that, didn't you?"
The child nods.
"Didn't work, did it? Let me guess, by the time it warmed up, and you loaded the tape, which spun and whirled for 45 seconds, the part you wanted to record was over?"
The child nods again, tears forming in his eyes.
"Don't worry," you say.  "You will have the Internets!  You will have the ability to digitally capture anything, store it in a tiny device, manipulate it, put it on YouTube, and beam it to your smart phone!"
The child frowns, unimpressed.
You can't resist reaching out and patting your 7-year-old self on the head.  However, as this blows a hole in the space-time-continuum, everything is wiped out of existence.

Um, I forget exactly what I was trying to illustrate there; it went off the rails.
Posted by Sampoerna Quatrain at 07:23 No comments:

Labels: Star Wars, Vintage Album Reviews
Newer Posts Older Posts Home
Subscribe to: Posts (Atom)
Snake and Boris welcome you to a mysterious old tavern called The Sphinx. Here we will discuss many interesting things. You will notice many signs on the wall. One says, "A splendid time is guaranteed for all," and another, "An acorn is just another nut in a beret."