The Lowdown On This "GODZILLA vs THE SMOG MONSTER" DVD... 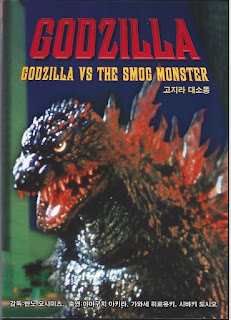 Have you seen this DVD, in places like Amazon or Ebay? Have you wondered what was up with it? I had wondered for a long time, and I broke down and spent a whole four dollars and 80 cents to find out...here goes:

1) Could it be a copy of the American version of the film, on a factory-made DVD?  Nope. Firstly, the cover says "GODZILLA vs THE SMOG MONSTER," and shows Godzilla 2000...that's a little bit like putting Harry Truman on the front of your George Washington biography, but I suppose we can overlook it for the time being.  Nevertheless, it's our first clue that something is amiss. 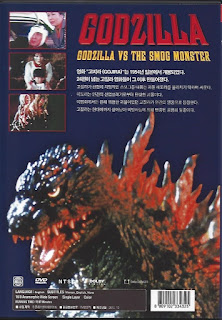 2) I should point out that the title of "SMOG MONSTER" is incorrect here.  SMOG MONSTER can mean only one glorious thing, and that is the AIP dub that played in American theaters and on American TV for years.  This, my friends, is GODZILLA vs HEDORAH, specifically, Toho's (inferior) International dub of the film.

3) Even though the tiny screenshots on the back cover are a convenient 4:3, this film is letterboxed...I haven't done a subtitle comparison, but it looks to me that this is a complete bootleg of Sony's 2004 DVD, which was re-released by Kraken in 2014, and is still available! In short, this disc should not exist.

4) Finally, since this film is one of a handful that is unavailable on DVD in its classic American version, if you want the AIP dub, you have two choices:  track down one of two VHS versions, OR, there are some fan-made projects out there that sync the AIP dub to a widescreen print of the film:  seek, and you shall find!

Posted by Sampoerna Quatrain at 07:39 No comments:

We all know that Blue Oyster Cult wins the award for "Best Godzilla Song" (and really, how can you beat that?), but there are lots of lesser-known Godzilla-themed songs out there that never get talked about.  For some years now, I've been gathering songs about Godzilla to put into a chronological project, and I kept running into a song called "Godzilla" by 70's funk-master Jimmy Castor; in fact, it pops up more than once in the timeline (as you will see).  Frustratingly, you can't just pull up the different versions on the YouTubes to compare (it seems only one version--the 1985 12-inch--is even on there).  You also can't find a CD release of them, or streaming Amazon versions to hear.  SO, I had to just track them down and buy them all. 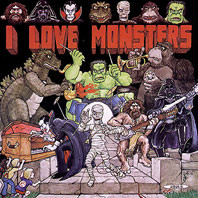 Release #1: 1979 -  One caviat to this project is the little-known 1979 kids' record I LOVE MONSTERS, where Castor took his most famous song, "Troglodyte," and built an album, adding some other odes to monstrous characters including Godzilla, The Mummy, and even embracing Star Wars mania with a song about "Vadar" [sic].  This is a very expensive album, and also, just not out there for downloading anywhere, from what I can see.  "Godzilla" is listed as running 3 minutes and 58 seconds.
Release #2: 1980 -  LP, 7-inch, and 12-inch: Apparently, the MONSTERS album wasn't distributed too well, and Castor liked his Godzilla song (and the Mummy one too), enough to carry them over to his next album, called "C," which came out in 1980.  "Godzilla," also listed at 3:58, was released as a single, backed with "The Mummy."
(Note that the title on the LP & 12-inch labels is written as the Japanese characters for "Gojira," which is also the way it's written on the album's sleeve, which must have confused some buyers!)  For our purposes here, the song is taken from the 7-inch single.  My 12-inch copy was a little skippy, but I can confirm that they are identical releases. 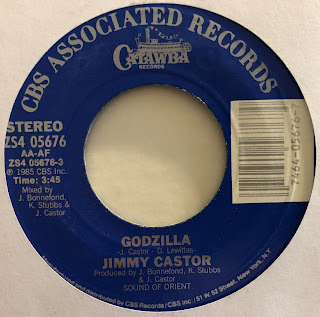 Release #3 - 1985 (7-inch):  I was actually confused for some time as to why there were two versions of the song, until the "1985" year jumped out at me, and I realized it was an attempt at a cash-in for GODZILLA 1985...and why not? I think this is really more of a re-mix with some new bits added, than a straight-up remake of the song, but either way, it created another version.  The label says it runs 3:45. 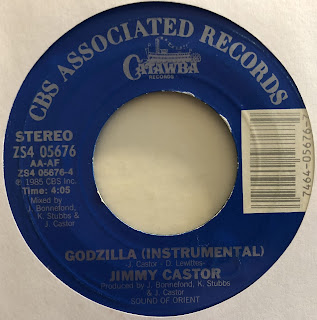 The B-side gave us yet another version, "Godzilla (Instrumental)," which is a little misleading, because it really only omits Castor's verses, and all the other spoken and sung parts are present.  Listed as running 4:05. 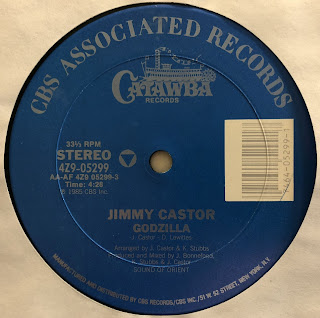 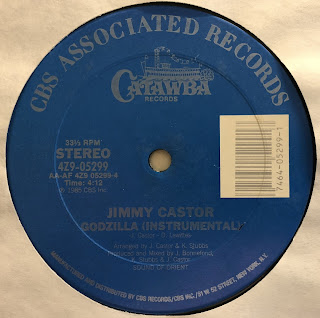 And, therefore, the B-side (also "Godzilla (Instrumental)") is longer as well.  Listed at 4:12, oddly...for some reason, the instrumental versions run longer than their A-side.

Okay, you've made it this far! Are you one of the seven people in the world who think this is significant? If so, read on for your reward!

Let's have a quick recap of the different versions of this song that exist:


Two footnotes:  First, I threw in "The Mummy." I know if I had slogged through an article like this, I'd have been interested to hear it too...such as it is.  It's a bit like "King Tut" without the Steve Martin.  Also, you will notice that the tracks are all shorter than the listed times...I did some extensive speed testing of my turntable this weekend, and these are correct! What can I say? Labels lie.
Posted by Sampoerna Quatrain at 11:40 No comments:

I've been working on a chronology of all of the Godzilla (and friends) VHS releases in the USA...which turned out to be a large project.  We will get back to this topic soon.

Today, however, we take a moment to remember Video Treasures.  In the over 150 Godzilla-&-related tapes that were produced, from the early 1980's to 2002 or so, the releases of Video Treasures stand out, because they commissioned artwork that was not only original, but striking and well-done! This wouldn't be repeated on a large scale until the 1990's, from a "big" player, Paramount.


In 1995, Video Treasures was combined with a competitor, Starmaker, and merged together, creating Anchor Bay Entertainment, which in 2016 was "folded into Lionsgate."
Posted by Sampoerna Quatrain at 06:20 2 comments: 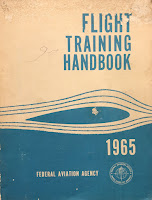 Here's the "short version" of the FLIGHT TRAINING HANDBOOK.  I read it over the weekend, and so I now know how to absolutely fly an airplane.

There's a lot of talk about fire extinguishers and parachutes, but I thought I'd share some of the really important details, in case any readers are looking for a new career path: 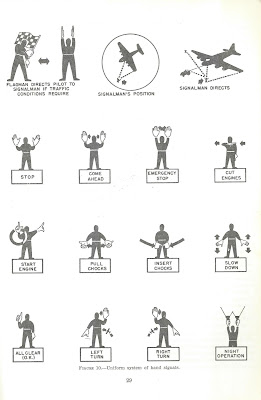 First, study all of these diagrams carefully!  When you first fly an airplane, you'll notice a guy who looks like Mr. Game & Watch appearing on all of the runways.  He is easily recognized by his giant hands.  You will see them, because he will be waving them at you constantly, as if he's trying to tell you something.

To this day, I still don't know what "chocks" are.

Oh! And here's one they don't tell you is on the test, but it is: 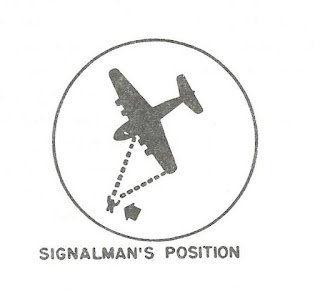 They kept asking me what is important about the signalman's position...and it's a trick question, because from the diagram, he has obviously fallen out of the airplane! He's in no position to signal anybody, except for help of course.

They also make you study diagrams of a landing, and identify it as such.  I will be honest with you, I knew what a landing was before I even read this book.  Notice that, at the end there, you get three points for doing it.  This is important:  make sure that you always remember to record these points in your pocket scorebook, or else you won't be able to redeem them for prizes once you are inside the airport.

The test-givers also drone (a little flying joke, there!) on about take-offs, and make you memorize this diagram.  I will save you some valuable time:  all you have to do to take off is to do the complete opposite of what a landing is.  It's just that easy. 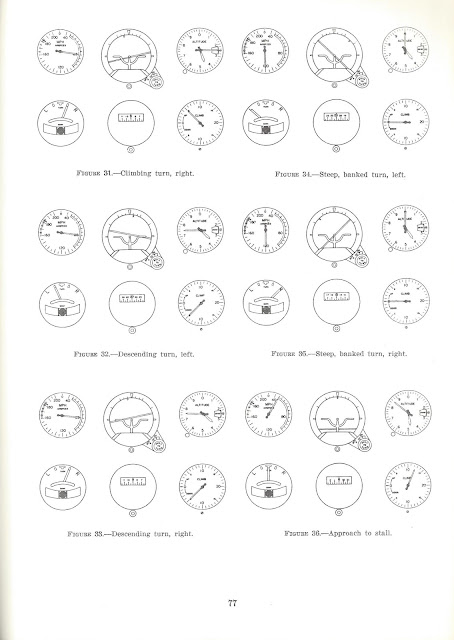 Also, there's about forty pages of stuff that looks like this page (above).  None of it is important, really.  During your exam, point to one of the dials that has lots of numbers on it (maybe the "Attitude" one), and tell your instructor that you can't fly this plane, because "the clock is broken." They usually laugh so hard, they will pass you just out of delirium.

If you do decide to take any of my advice, or even read a book like this, and become an actual pilot, good luck to you!
Posted by Sampoerna Quatrain at 13:48 No comments:

This cool item is a very well-preserved flyer from the Bel-Air Theatre, in Bel Air, Maryland.  All three of the films listed above came out in the summer of 1963 in the USA!
Posted by Sampoerna Quatrain at 08:04 No comments:

A while back, we looked at some of the various "bootlego" minifigures that are available inexpensively from China (seen here).

Now, before we continue, there are two kinds of Lego collectors:
1) Purists who say they will only support Lego, and anyone else making Lego-compatible items be damned.
2) Collectors who don't mind buying another company's product, when it's something that Lego just doesn't make.

I'm not here to argue, but admittedly, both my categories are simplified.  The sticky part of the issue is that the Chinese companies that make these new items are usually also bootlegging real Lego sets, and therefore taking away from Lego intellectually, monetarily, and so on.

But, you can guess which camp I'm in...so here we go with more proof: 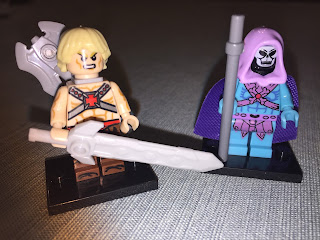 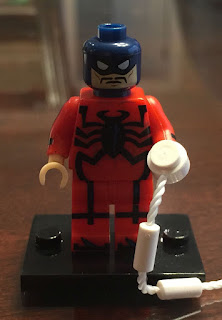 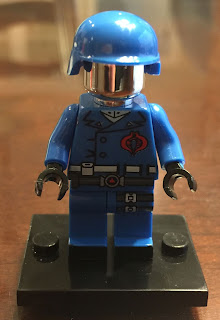 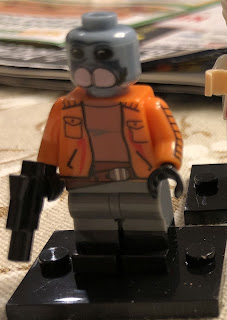 Okay, let's talk about this Walrus Man for a moment.  You may know that Lego just released their third attempt at a Mos Eisley Cantina, and their third failure.  When I first saw this Walrus Man, I assumed it had been leaked, and therefore copied ahead of time.....wrong.  While the new Cantina did give us the bartender, there were no new aliens.  It almost isn't a type-able sentence to say that you could even fathom to put out a Cantina without any new aliens.  But it happened. We will come back to this in the near future, when I finally do an article about my version of what the Lego Cantina should look like.  Stay tuned. 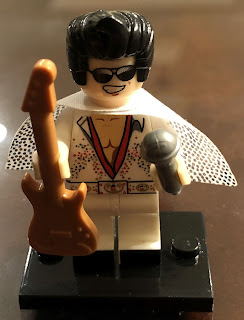 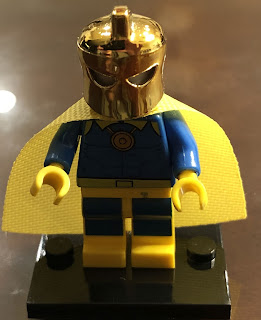 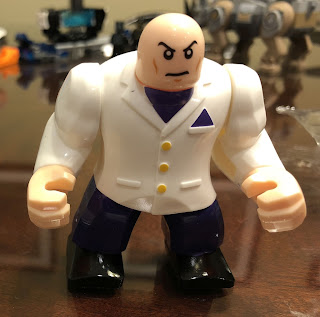 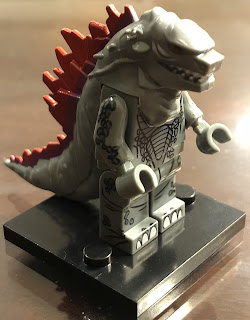 Back to Godzilla, this one is actually available in a ridiculous amount of variations and colors, including transparent colors*.  I can only assume that the intention here is for this to be the PLANET OF MONSTERS Godzilla from the new anime film.  In that case, the one at the top of this post is the correct color!

Posted by Sampoerna Quatrain at 07:54 No comments:

Labels: Classic Marvel, Comics, Lego
Newer Posts Older Posts Home
Subscribe to: Posts (Atom)
Snake and Boris welcome you to a mysterious old tavern called The Sphinx. Here we will discuss many interesting things. You will notice many signs on the wall. One says, "A splendid time is guaranteed for all," and another, "An acorn is just another nut in a beret."