These posts always begin with "it's been a while since we did one of these."

It's been a while since we did one of these, but guess what, things are still weird out there, so here goes: 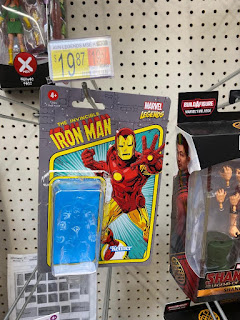 This is what action figure-hunting is like for me.  I wanted to change the title to "The Invisible Iron Man." 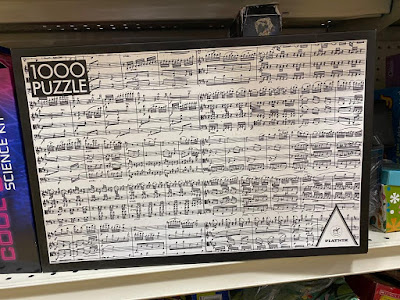 I know a jigsaw puzzle exists that's completely blank, but this must be the second-worst puzzle of all time. 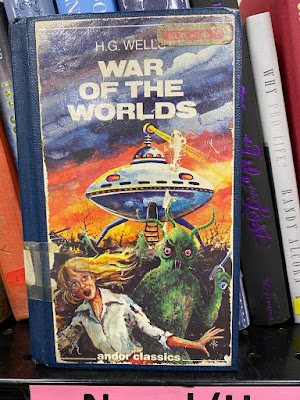 And speaking of worst, here is the worst design for War of the Worlds, ever (I've read this book; there are no blondes in it at all).

Staying in the book section for a moment, I've noticed that, over just the last few years, I could've built an entire bookshelf of weird and/or disturbing books if I'd been so inclined...it would be interesting to have something like that in a prominent place in your home, that would be the first thing people see.  Turns out, "Rice Blast Disease" is also known as: blast fungus, rice rotten neck, oval leaf spot of graminea, pitting disease, ryegrass blast, Johnson spot, and neck blast.  I assume that list I just typed is most of the content of this book. 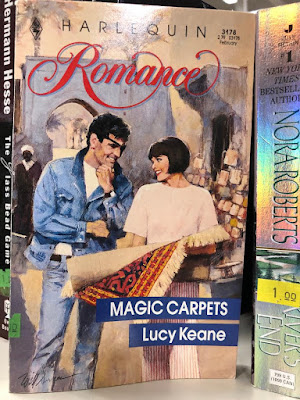 And, for the ladies, a book about that time that Hasselhoff played Nick Fury.  And bought a rug. 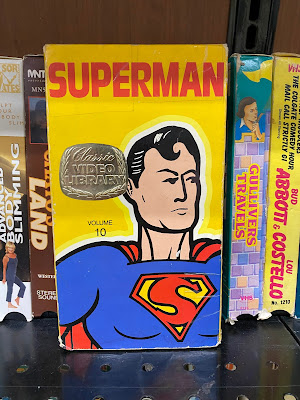 You could make a swell coffee table book about public domain VHS artwork, and how it fails at anything that it ever tries to be.  If only I had that kind of time.  This is "Based Superman just does not care."

Best for last department:  All of us who are old enough know that there was a time when "woodburning sets" that came with electric soldering-iron type tools were approved toys for small children, along with the normal comedian-fodder items such as lawn darts and chemistry sets.  Well, perhaps there was something to that after all. 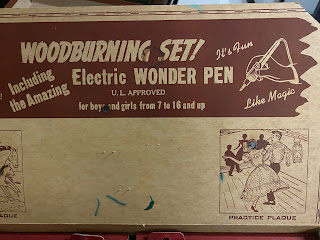 This set came with very thin wooden shingles with pictures printed on them, the idea being that you used the iron to draw over the lines, color the picture somehow with some included paints, and then you'd have a piece of "art" that your mother would throw away next spring cleaning.  This particular set had a cardboard insert with some "Practice" areas: 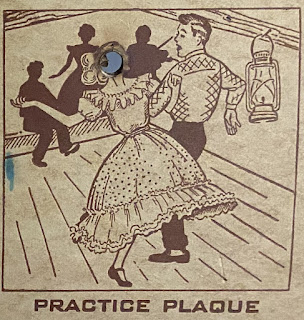 Yikes. Junior Misogynists of America, much?
Posted by Sampoerna Quatrain at 08:19 No comments: 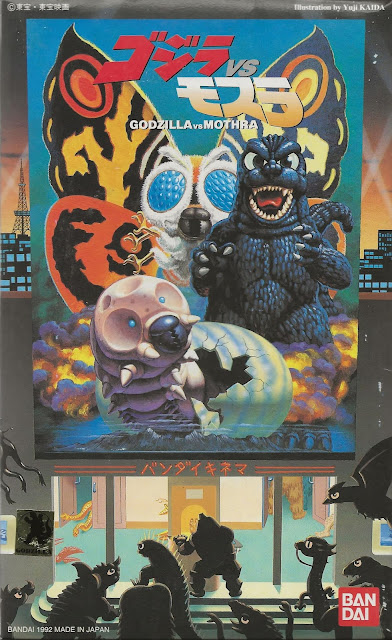 Yuji Kaida is one of the greatest kaiju artists of all time.  I didn't even qualify that statement with "in my opinion," because it's simply an indisputable fact.  He's simply amazing, and the artwork for this Bandai model kit shows he is also a Chibi/Super-Deformed master...because of course he is.  He also sculpts for SH Monsterarts figures...but I digress!

This model kit is one of a series called "The Byun Byun Monsters," ("byun byun" being an onomatopoeia like "vroom vroom") which included tiny buildings and adorable kaiju that were built around pull-back motors, allowing some hijinks and random destruction.  There are three model kits in the series--one for GODZILLA vs. KING GHIDORAH, and two for GODZILLA vs. MOTHRA.  This is the middle kit, #2, and it features Godzilla, Mothra (decorated with foil stickers), and a Mothra larva.  It would have been nice if the series had continued until DESTOROYAH...or, at the very least, we could've gotten matching artwork for the rest of the series' posters in SD style. 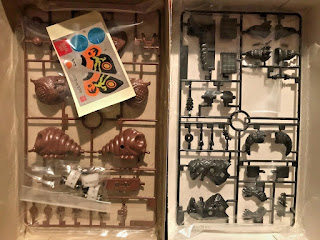 Nevertheless, there is a lot to enjoy about this kit, even if you don't build it.  The instructions have a full-color side that showcase the artwork (which is a little cropped on the box), and even includes a guide to all of the kaiju cameos on the front! Can you name all 17? I bet you can! 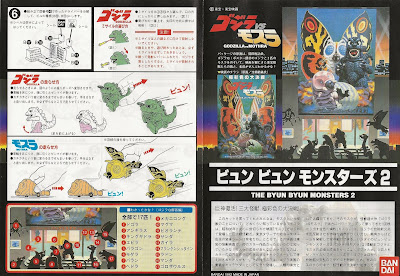 While we are on the subject, here are "Byun Byun" kits #1 and 3.  I feel like the Battra kit wasn't a huge seller, because it doesn't turn up very often.  The Ghidorah kit, as you'd imagine, stays in pretty high demand.  It includes the parts to swap out and convert to Mecha-King Ghidorah too, which is nice. 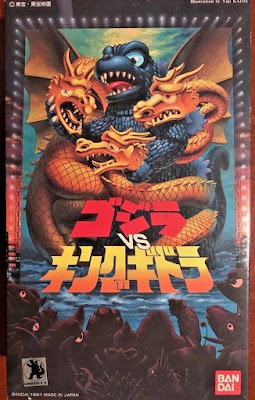 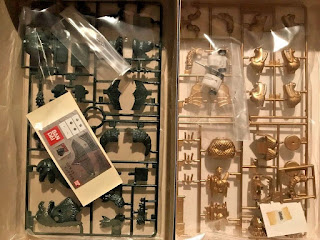 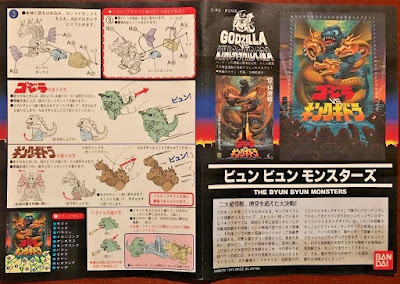 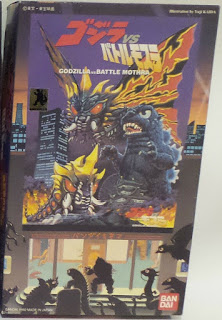 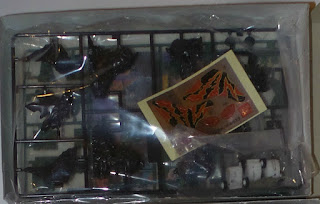 Posted by Sampoerna Quatrain at 12:11 No comments: 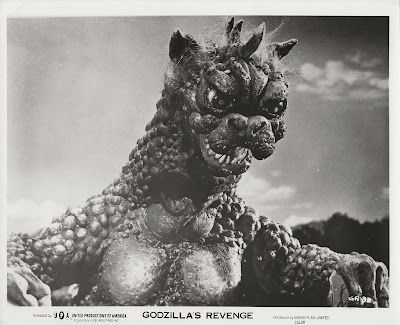 Here are a couple of stills from the unfairly-maligned GODZILLA'S REVENGE that I picked up recently.  What really caught my attention was this second one, which is obviously a still from DESTROY ALL MONSTERS, with Gabara pasted in.  Toho often did "paste-ups" for promotional purposes, and some of them are pretty zany. 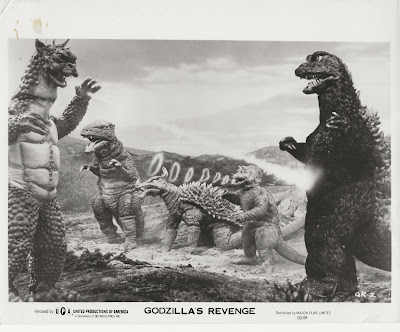 This one almost looks right, like Gabara belongs in the photo, until you stare at it too long and realize what's going on.
Posted by Sampoerna Quatrain at 07:37 No comments:

Amazingly, I was able to score another pair of adjoined 35mm film frames that were used by TV stations.  You may recall the first set of these, which we looked at a few years back, and you can see here:  HB Promotional Film Frames (1978).  These frames were often made into (or just used as) slides and used by TV stations for promotional purposes, such as bumpers or showing what was coming up next. 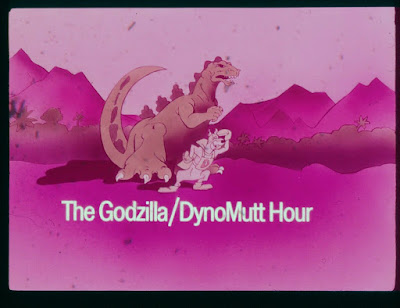 The Hanna-Barbera Godzilla animated series had two seasons, but was reconfigured several times as part of an hour (or longer) block of time.  In 1980, it was paired with Blue Falcon & DynoMutt, which is where these particular images come from (he was even eventually paired with Hong Kong Phooey and the Harlem Globetrotters).  I color-corrected them a bit, as old film stock tends to turn a bit (in this case, more red).  I think I got them closer to what they would've looked like.  There are two frames, just like before:  one with a title, and one without.  Also, the scale is a little less than accurate, but I guess it wouldn't be nearly as interesting if DynoMutt only came up to Godzilla's foot! 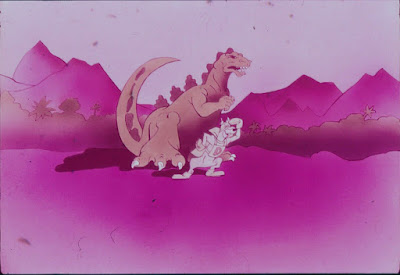 By the way, who are they looking for? Blue Falcon? The crew of the Calico?
I love this kind of stuff, because it's what gets lost, over the years, and forgotten about.  And that's a tragedy that I work to prevent.
Posted by Sampoerna Quatrain at 11:42 1 comment:

Labels: Animation, Art, Godzilla, Vintage
Newer Posts Older Posts Home
Subscribe to: Posts (Atom)
Snake and Boris welcome you to a mysterious old tavern called The Sphinx. Here we will discuss many interesting things. You will notice many signs on the wall. One says, "A splendid time is guaranteed for all," and another, "An acorn is just another nut in a beret."