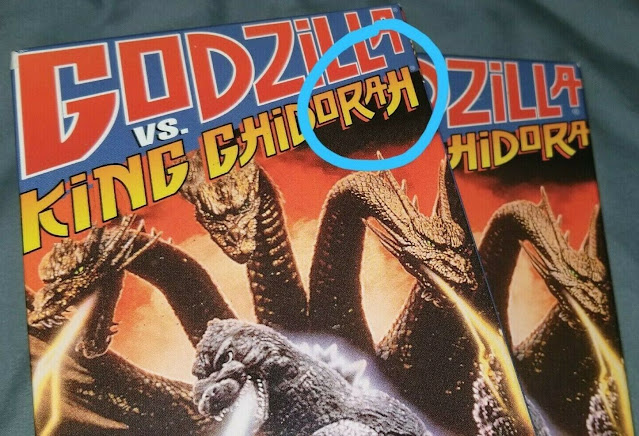 Here's a weird one.  It's pretty rare for a VHS box to have ever received any kind of update.  Sometimes a year will be replaced, or the manufacturer's address will change, but here is a major example that was apparently done at Toho's insistence. 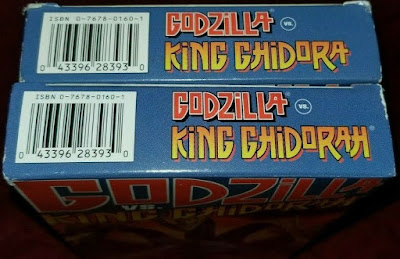 Now, granted, lots of the 1980's Godzilla VHS were semi-legitimate at best, and there often wasn't a lot of attention that went into them.  In 1998, when  the Hollywood debacle known as "GINO" caused another surge of Godzilla merchandise in the United States, the Heisei series of Godzilla movies began to finally get official releases in the U.S., by Columbia/Tristar.

The front of the box for this movie was then printed as "GODZILLA vs. KING GHIDORA," giving us yet another spelling of everyone's favorite golden space dragon's name.  (Both "Ghidra" and "Ghidrah" had been prevalent since the 1965 release of his film in the U.S.) 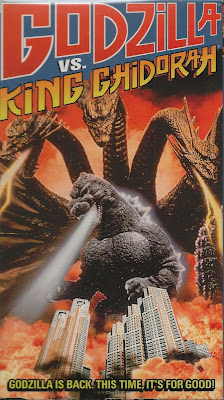 Now, it's clear that by the mid-to-late 1990's, Toho was earnestly trying to normalize and streamline all of their preferred kaiju names (remember when you first started seeing the little pictures in the circles, each with the character's "proper" name, on products?).  Soon after 1995's GODZILLA vs. DESTOROYAH film came out, American fans typed about "Destroyer" pretty commonly, but Toho was having none of it, and has done a good job at correcting us all to his actual name of "Destoroyah," which continues to this day. 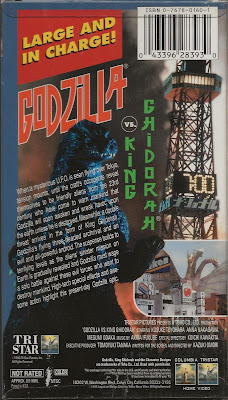 Which is a good example:  the VHS box for the 1995 film was correct when issued, which lends further credence to the reason for this one being revised. Also, the original (crummy, non-letterboxed) DVD of GODZILLA vs. KING GHIDORAH was released in the fall of 1998 too, and strangely, the title had the correct spelling of "Ghidorah" on that artwork. (What's hilarious is, in the synopsis on the back of both versions of the VHS, the correct spelling of "Ghidorah" is used in the text!)

The back of the revised tape still gives 1998 as its date, and it's not just a straight copy of the previous artwork, because the (vertical) title had to be changed there as well (see photo below)...plus, there are some differences in the fine print that add King Ghidorah to the copyrighted characters.  And the strangest, most baffling  move of all was changing the running time from 103 minutes to 89 minutes! That one I can't figure out. 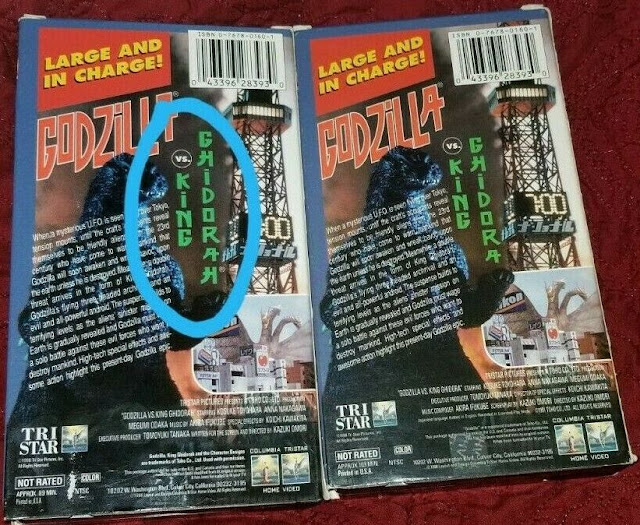 No doubt this was a "running change" done in production, although it must've been done quite late in the game, because this tape is apparently super rare.  I was lucky to snatch this up, and I should credit the eagle-eyed Ebay seller who knew of its existence (he said it was only the second one he'd seen in his life!).  I know I will definitely be looking twice at any tapes of this film that come up (the incorrect version is quite common). 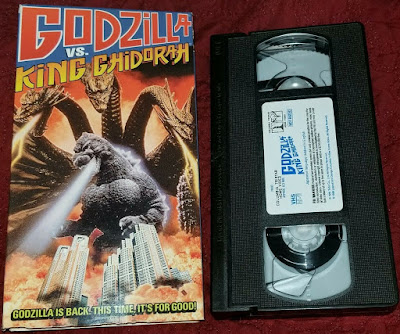 One further oddity:  while the title is corrected on all sides of the box artwork, the label on the tape remains incorrect! This is further evidence for the "running change" theory! By the way, this tape has been added to our sub-page that keeps track of all Godzilla & Toho VHS released in the USA!
Posted by Sampoerna Quatrain at 09:30 No comments:

The Prince and The Dragon (KidStuff Records, No Year Given) 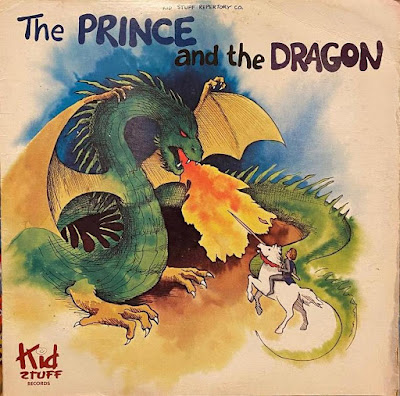 This is the worst kids' record that I've ever heard, and that's saying a lot.  It's just so bad, it's difficult to put into words.  I bought it because I thought the cover was sort of cool (even that falls apart; the longer you stare at it, the more problems you find with the art...for example, the dragon's tail, and his absence of back legs), which is never a great reason to buy an album, of course.

It's so obscure, KidStuff couldn't even be bothered to print any details about it on the sleeve, much less the year it was even made.  It wasn't even on Discogs (it is now; I had to add it myself), and I suspect there was a good reason why.  Most likely, I've brought back an unholy power that was supposed to stay buried forever.  And for that, I'm sorry. 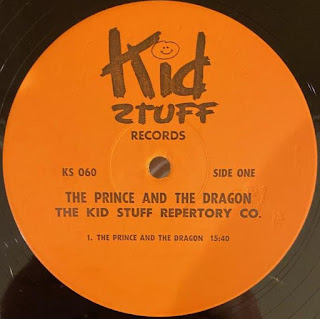 You won't be surprised to learn that the times given on the labels (the only info about this LP that we even get) are incorrect.  KidStuff (really should be a backwards "S" there, but who cares) often credited their ridiculousness to the highfalutin title of "The Kid Stuff Repertory Co.," which in this case is just two men, a woman, a piano player straight out of a silent movie theater, and lots of accents that go all over the place from minute to minute (and some occasional ad-libbing).  I'd be shocked if there was any organized method behind this "production" other than just buying a tape from amateur theatre students, or somebody's brother-in-law.  I say "buying" a tape, but most likely, it was "trading for a sack of Big Macs, or possibly rolling papers." 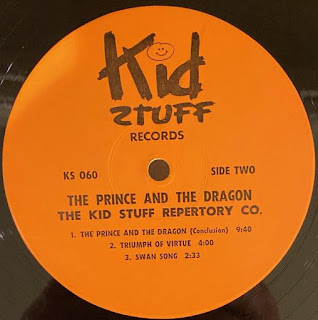 My favorite line? "The dragon's tail whipped around his body like a whip."  The whole thing somehow drags on for just over 28 minutes of your life--which you will never, ever get back--and the last few minutes are even extended by letting the piano player improvise and vamp endlessly (these are listed as two separate songs on the label, but that's wrong too).
The worst problem though, is the story, which makes no sense.  There's a prince, whose father is a king (duh), but there's another princess somewhere, whose father is also a king (also duh), and they have the same voice, so meanwhile the listener (me) is thinking they are siblings, and perhaps don't know it? Eww. (Insert George Lucas joke here.) There's a dragon that's eaten nearly everyone, and the prince finds out that there are a bunch of random animals inside of each other (you read that right) like nesting dolls, that are "the source of the dragon's power," and he sets out to fight the dragon (hand-to-hand, I might add).
All of this confused me so much, I did what I do for nearly everything else that confuses me:  consult Wikipedia, who tells me that "The Dragon and the Prince" (KidStuff obviously reversed it so they could retain the toy rights) is a Serbian fairy tale (so you know it's going to be extra happy).  The synopsis sort of matches, in that there are various (but different) animals inside of one another, and they are the source of the dragon's power, who must be burst open...only in the KidStuff version, it's not very clear at all (and there's a second dragon for some reason at one point) how this works out, or even what happens to the dragon.  They just stop talking about him.  Also, the prince has to get three sticks that open a prison somehow, and all of the people that the dragon has eaten are captured there (alive, because reasons), which makes no sense EITHER...they are freed, of course, but the Wikipedia version ends with the whole town disappearing, and the prince crying and having to dig their graves.  So, there's that uplifting ending to enjoy. (The KidStuff version only ends with the listeners crying.)
Here's the take-away.  If you don't know, no matter what culture they are from, basically, fairy tales are drug-fueled, paste-eating fever dreams of nonsense, originally designed to control wayward children by scaring them in or out of doing something...this is all fine, but what boggles my mind is that somebody wrote this crap down, and saved it for posterity, as if it would be meaningful to any of us in the future.  And that is the real crime, my friends.
LINK (you have been warned): Prince and the Dragon
Posted by Sampoerna Quatrain at 13:21 No comments:

Labels: FAIL, Vintage, Vintage Album Reviews
Newer Posts Older Posts Home
Subscribe to: Posts (Atom)
Snake and Boris welcome you to a mysterious old tavern called The Sphinx. Here we will discuss many interesting things. You will notice many signs on the wall. One says, "A splendid time is guaranteed for all," and another, "An acorn is just another nut in a beret."