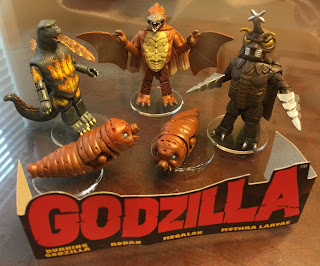 For a series that was originally supposed to stop at 1, we are extremely lucky to see Series 3 arrive! Thank you, Art Asylum.  Now let's take a closer look at the figures that make up what is really a 5-pack! 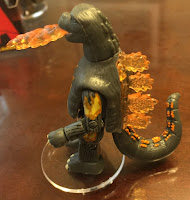 Burning Godzilla is not my favorite incarnation of the Big G, but as the first two Godzilla Minimates they gave us were pretty similar, this one is iconic enough to be different.  Plus, I understand that you have to include a Godzilla with each series, or they probably wouldn't sell as well.

Also, his flaming breath is removable, like the one from Series 2.  If you have a Lego-sized book, he can do an impression of the Statue of Liberty.

Next up is Rodan, and I am sort of split on this figure.  He's good, but clearly hearkens to later incarnations of Rodan.  Not that that's a bad thing, he just turns out sort of bulky. 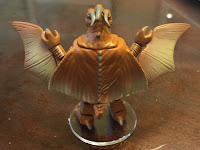 Also the wings are a bit wonky, but how do you make a Minimate with wings, and still have him be posable? As I recall, the Vulture's wings are single pieces, but Rodan's are bigger, so I'm sure it was a matter of playability.

You end up with unnatural poses, such as the one above, but then again, Rodan's hands are, honestly, not very useful to him, in actuality. (I started to put "in reality" there, which is a field day for you psychology students out there, I'm sure...let's move on!) 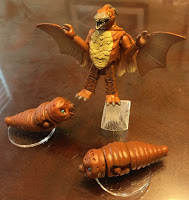 Before I forget, they do give you one of the standard Minimate "flight stands," so that Rodan can fly, which was a nice touch! 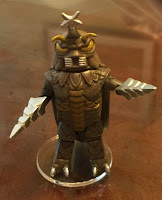 Megalon is next, and I think that this Minimate is a work of art.  It may be because he's an under-represented character, or it may be because his movie is much maligned, but I'll defend him to the end.  After all, he's my favorite giant bug kaiju that spits flaming poo-balls.

Plus, they nail the decoration on his back.  Just an all-around perfect Minimate. 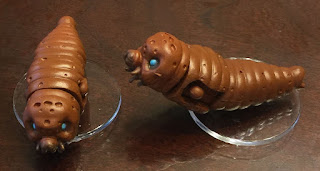 Ah, but there is still more.  We had previously gotten an adult Mothra, and Art Asylum now regales us with not one, but TWO of the Mothra larvae!  What's more, instead of phoning it in, and making them completely identical, one torso bends upward, while the other is ground level.  It's small touches like that one that make me happy.
I have to say though, I was confused from the initial photographs about the footprint-looking spaces on their sides.  I wondered if it was a lever to make the heads extend or move, but I was wrong.  One of the apparent tennants of the Minimates line is to make them interchangable, so that kids can combine parts in a way they want to.  I mentioned "playability" earlier, and I know that there will be some grumbling about these spaces (and each larva has two, one on each side), and that's when their true purpose hit me. 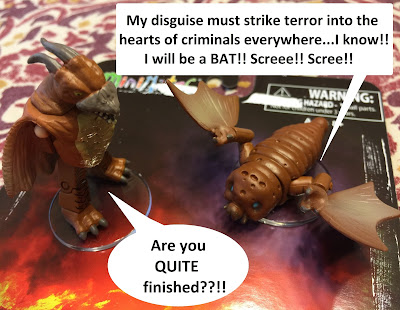 Just wrong, on so many levels.
All in all, a very welcome and solid Series 3.  No further series have been announced, but we can always hold out hope.  If we could just have a Series 4 with Angilas, King Ghidorah (which would be tough, admittedly), and Baragon...or a DESTROY ALL MONSTERS box set...I can dream.
Posted by Sampoerna Quatrain at 08:58 No comments: 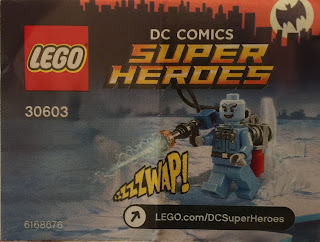 Since we covered the amazing 1966 Batcave set, we'd be remiss if we didn't mention this late addition.  A polybag from Lego--one of those deals where you get it if you order $75 or more--it can be found for reasonable prices through dealers. (For now.) 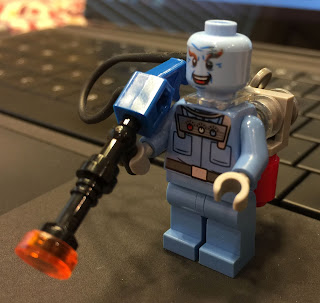 Played on the show by three actors, this one to me looks like the Otto Preminger Mr. Freeze, mostly because of the eyebrows.  But they nailed it either way.  If I remember my trivia correctly, the show popularized the character name, as there had only been a "Mr. Zero" in the Golden Age comics.  I'm just freewheeling here, without looking it up, mind you. 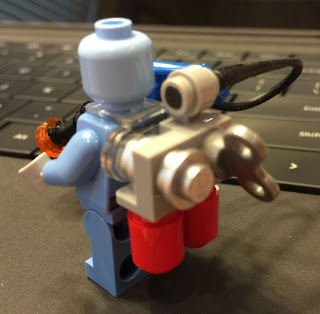 The wind-up key on the backpack is a nice Lego touch!  Since they were able to issue Mr. Freeze by himself, it makes me wonder about any other potential future releases.  A Batgirl with her motorcycle would be a nice addition!
Posted by Sampoerna Quatrain at 08:20 No comments: 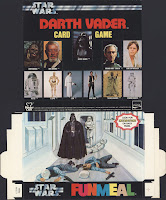 While not really Star Wars TRADING cards, this item does include vintage Star Wars cards, of a sort.  You may know that fast food chain Burger Chef had a Star Wars promotion that included a whole slew of their "Fun Meal" boxes, with punch-out models of spaceships and droids.  (As well as a set of four famous posters that were offered.) Also included in that promotion was this particular "Fun Meal" box, which featured the Darth Vader card game.

Before we look at that, check out the cool art for the main section of the box.  As you can see, each section would have been punched out, because the assembled box held the food and drink.  But what a shame it would be to interrupt this artwork! 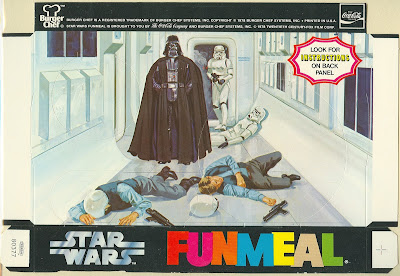 When assembled, the box had a 2-sided back panel that stood up vertically, and this was where the FUN was located.  In this case, we get a punch-out game of tiny cards, about half the size of a standard trading card.  What's more, many of the images are promotional; official reference images instead of just screenshots. 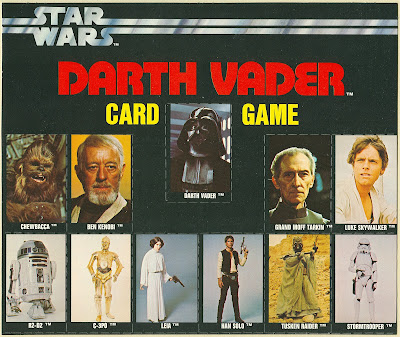 When the 23 cards are punched out, kids could play a matching game, apparently similar to "Old Maid," except that Darth Vader is the Old Maid (there's a sentence). 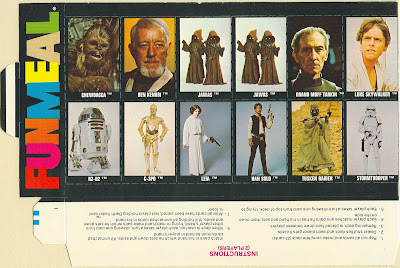 It's really a clever concept, and the boxes are a smart design.  I never had a Burger Chef in my area, so I couldn't really tell you how long these boxes were used.  McDonald's, on the other hand, maintained their Happy Meal box design for years.  Here's a better look at the instructions:

Luckily, a lot of these boxes were preserved, and are still out there.  I know if I had gotten one of these as a kid, I would have punched the cards out and used them, so I'm glad to have everything in one place.  Storing it carefully is going to be an issue, because it's bigger than a magazine-sized comic bag, and a tiny bit wider than a "treasury"-sized comic bag.  I guess I'm going to have to use an LP-sized bag to protect it.
As you can see, we are quickly running out of vintage SW card sets, but I have one more honorable mention to save for next time.
Posted by Sampoerna Quatrain at 06:24 4 comments:

Labels: Star Wars, Vintage
Newer Posts Older Posts Home
Subscribe to: Posts (Atom)
Snake and Boris welcome you to a mysterious old tavern called The Sphinx. Here we will discuss many interesting things. You will notice many signs on the wall. One says, "A splendid time is guaranteed for all," and another, "An acorn is just another nut in a beret."