Drawing of the Day 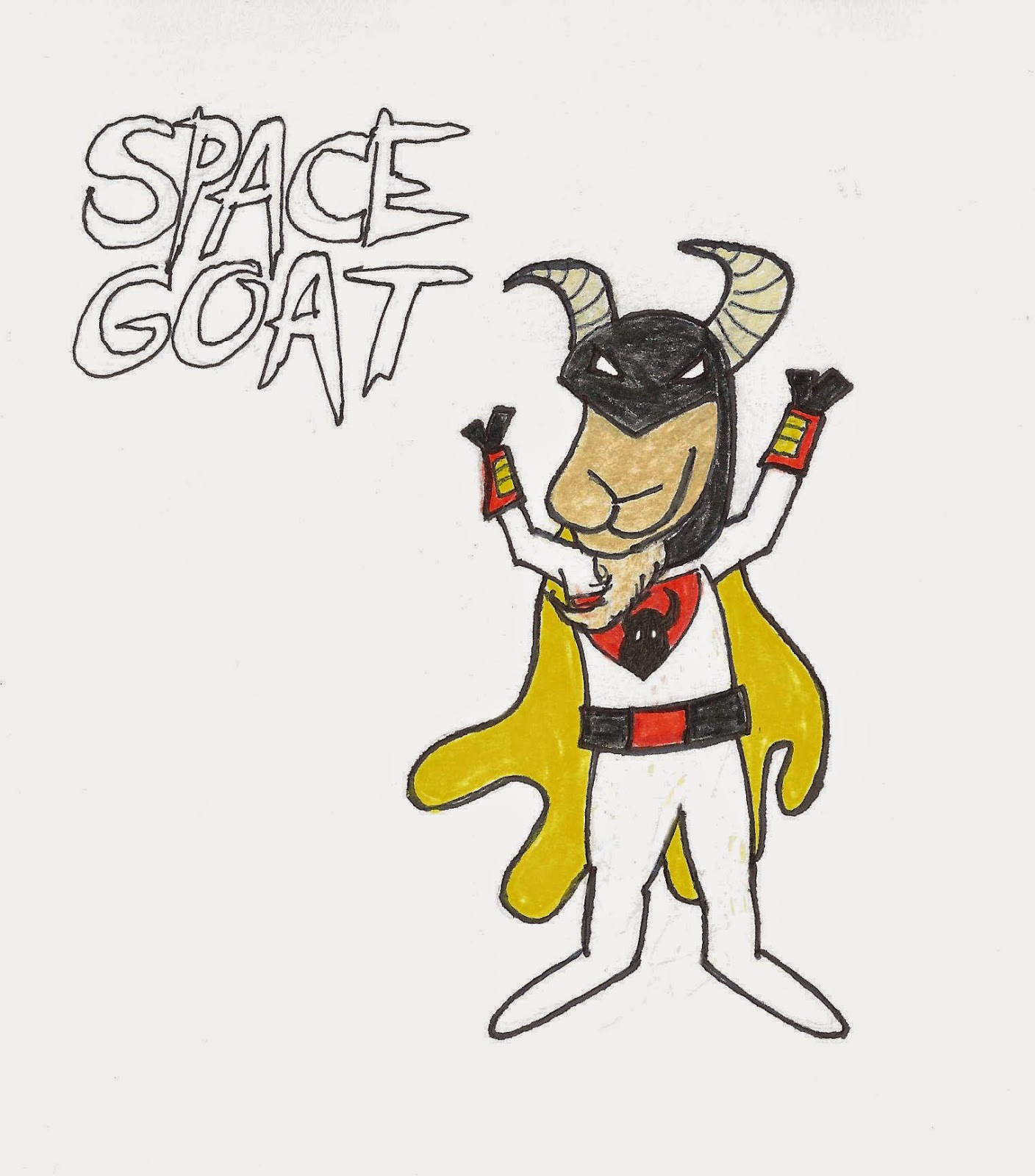 Posted by Sampoerna Quatrain at 07:56 No comments: 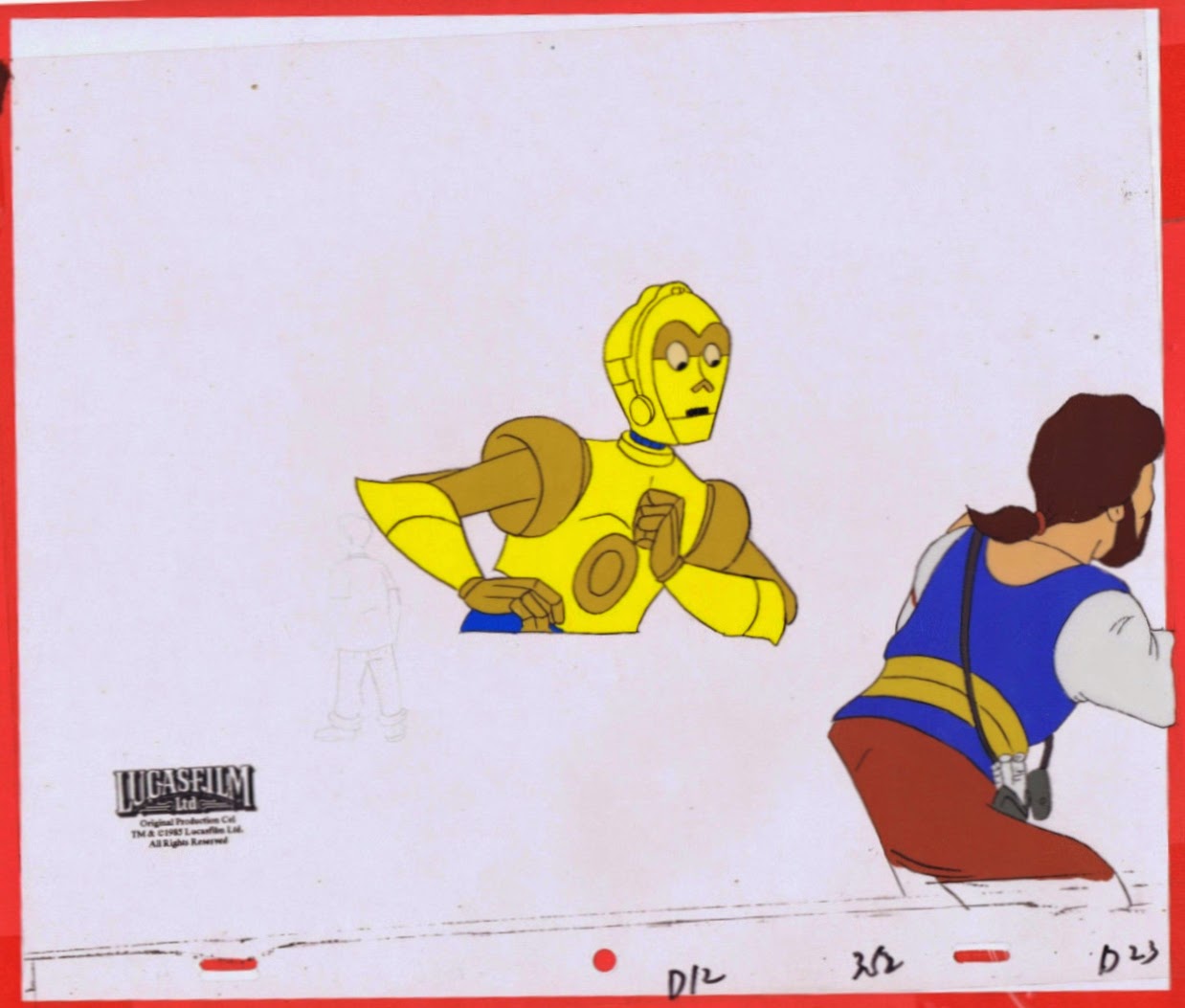 I know, this show wasn't very good, and admittedly, it didn't seem to have much to do with the Star Wars universe sometimes, but I've always had a soft spot for this Nelvana series.  Maybe it's because I can remember the excitement of the Saturday morning premiere event that I tuned in for--back when an animated Star Wars series was a new concept!  It was years before I saw it again, when the Sci-Fi Channel started showing it around 1995 or 1996.  And even now, all these years later, we've never had a proper DVD release of the whole season, only one VHS volume, around the time of the Special Edition, that consisted of a story arc of episodes strung together.  Something tells me that this isn't exactly a "top priority" for Disney, but I'd buy it.
Posted by Sampoerna Quatrain at 07:26 2 comments: 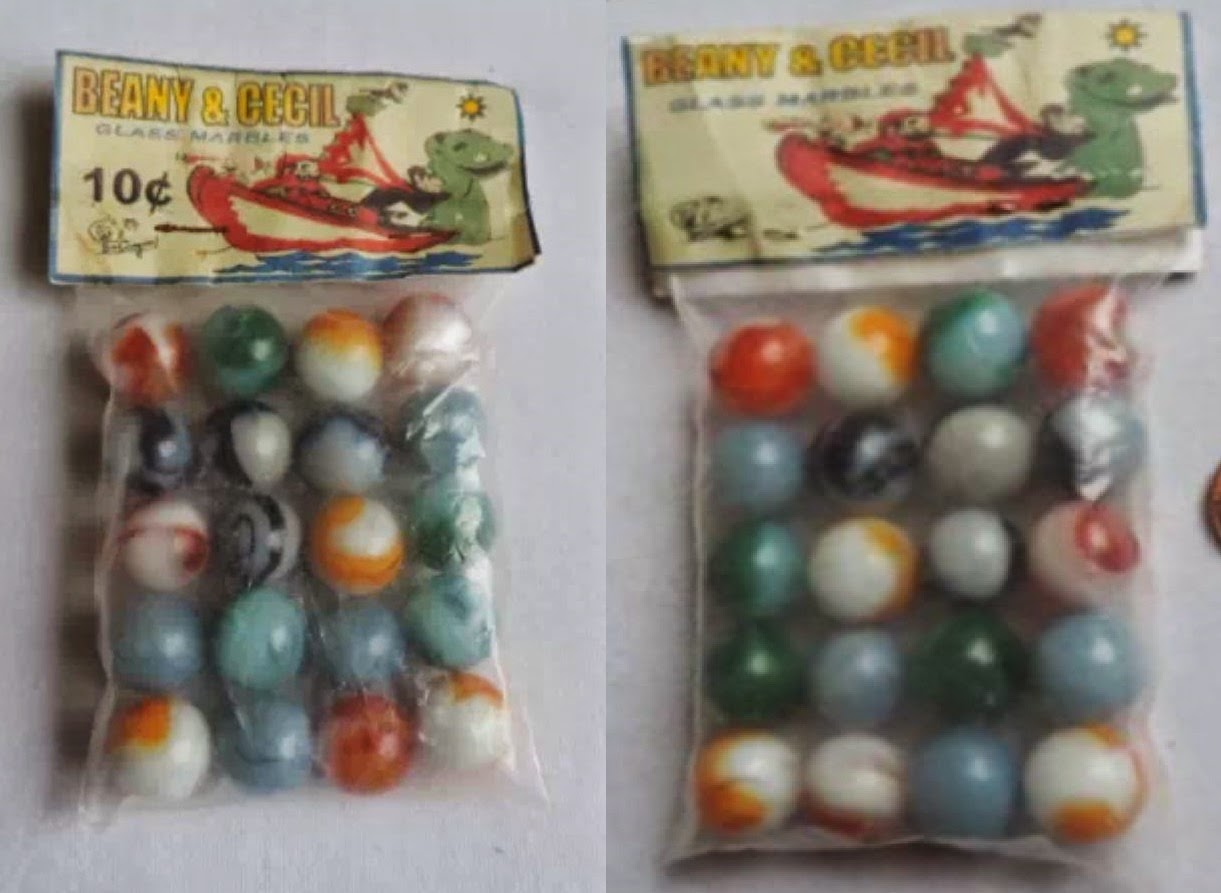 A recent purchase of mine--photos lazily cribbed from the auction itself.  The only difference in the front and back of the header card is the large price.  Imagine getting anything for ten cents.  Even marbles made of glass were better looking back then.
Posted by Sampoerna Quatrain at 06:27 No comments: 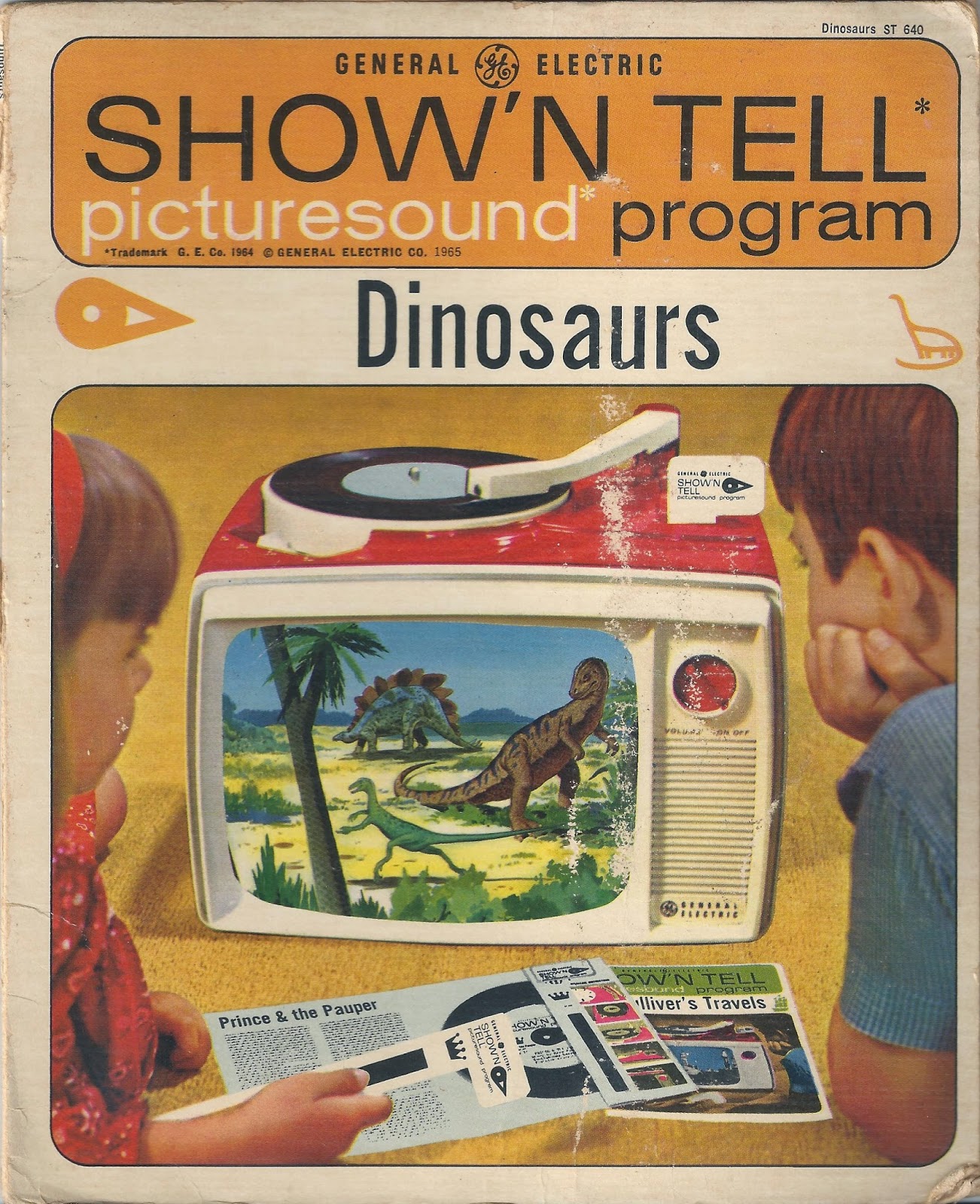 I had boatloads of these things.  But, I should preface that statement (why do people say that, when they have already SAID something? Doesn't "preface" mean that it should COME FIRST?) by saying that there is a huge difference between being a Child of the 1970's and...a Child of the 1960's. 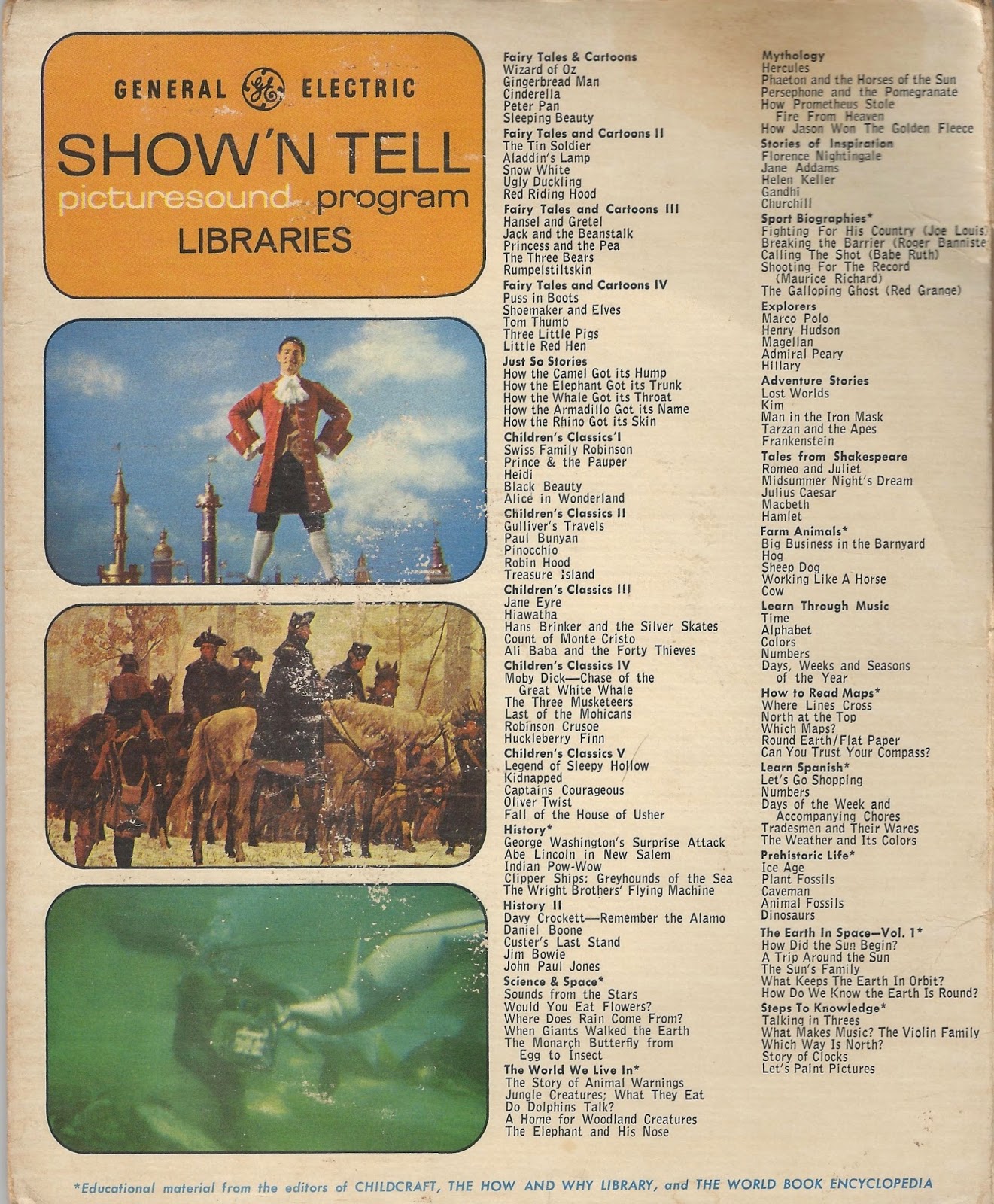 I'm not faulting you decade-older folks.  You had tons of cool stuff; stuff that I benefit from and enjoy to this good day...you just had to look harder for it.  But in MY day, we had licenses.  Oh, and blockbuster movies (yeah, I know, that used to be a good thing).  And licensing began to cause the world of entertainment to explode.
Case in point:  there I was, at my favorite thrift store, and I find what must be 50 or 60 of these classic "Show'N Tell" record sets.  [We've discussed these marvels of pre-VCR technology before, but for the uninitiated, they were filmstrip-and-record sets, and you watched them on a viewer built into the turntable, which automatically advanced the filmstrip as the record went along.] There must be a similar pile of these things still existing somewhere in my parents' house...and then I began to look through them.  They were dismally boring.  Three-minute adaptations of literature from the 1800's, and science lessons called "Which Way Is North?" and, I kid you not, "Would You Eat Flowers?"...would kids in the 1960's even sit through this dreck?  I would think that "Farm Animals: Hog," "Ghandi," or "A Midsummer Night's Dream" would have helped invent juvenile deliquency if I hadn't seen those films from the 1950's and known it was already around. 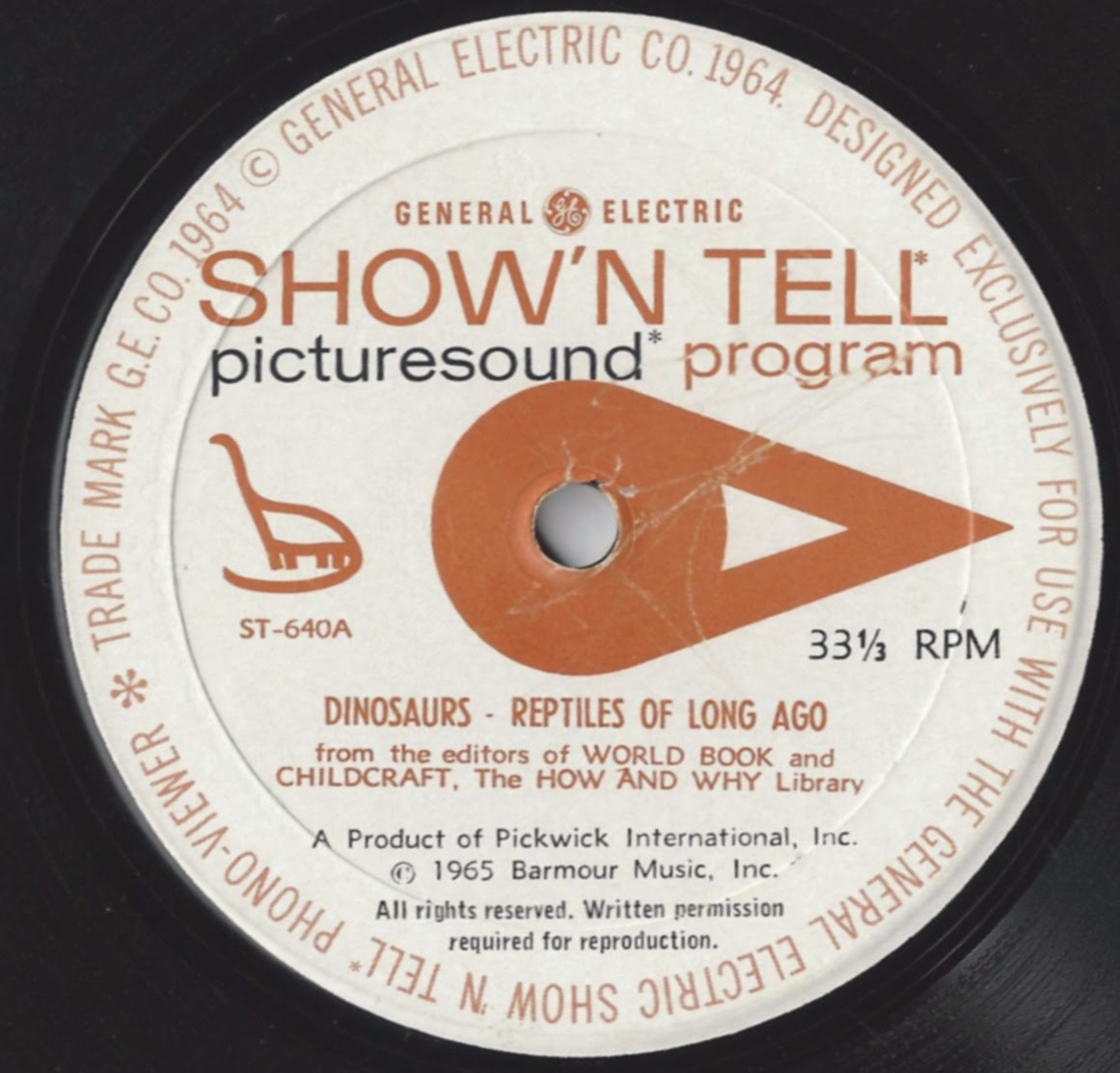 But I digress.  I was able to find one solitary title of interest, and I present it to you today.  No filmstrip, of course, but I've played that game before, and it didn't work.  Interestingly, these records are a weird intersection of brand names:  General Electric, Childcraft/World Book, and Pickwick International.  If I had to guess, I'd say GE made the record player/viewer, Childcraft/World Book supplied the text (naturally), and Pickwick manufactured the records...a partnership made in heaven. 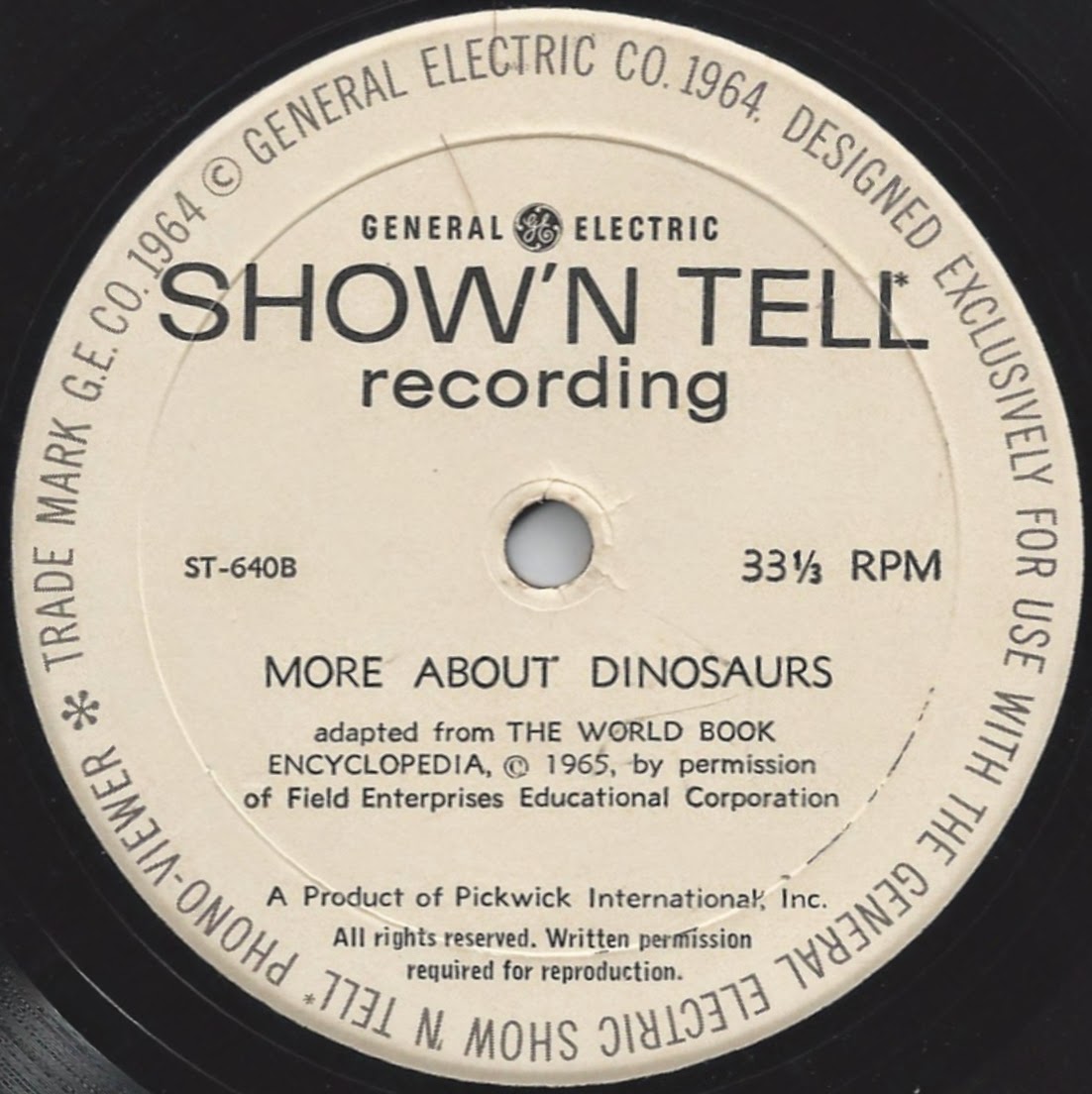 And hey, it's outdated information about dinosaurs, so this should be fun.  As a caviat (not a preface, mind you) to my earlier statements, I will admit that all the great developments in the 70's led to things like this happening shortly thereafter: 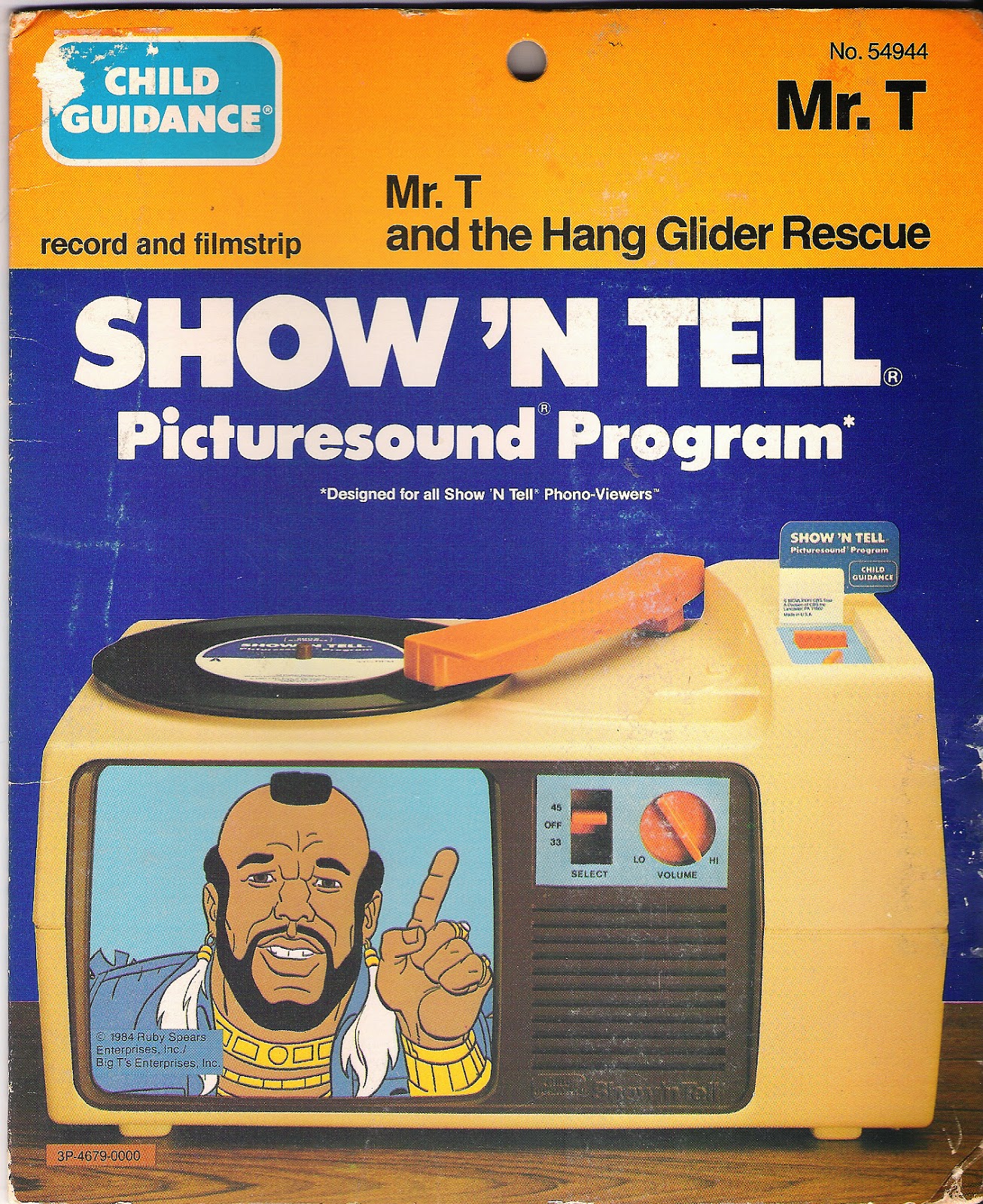 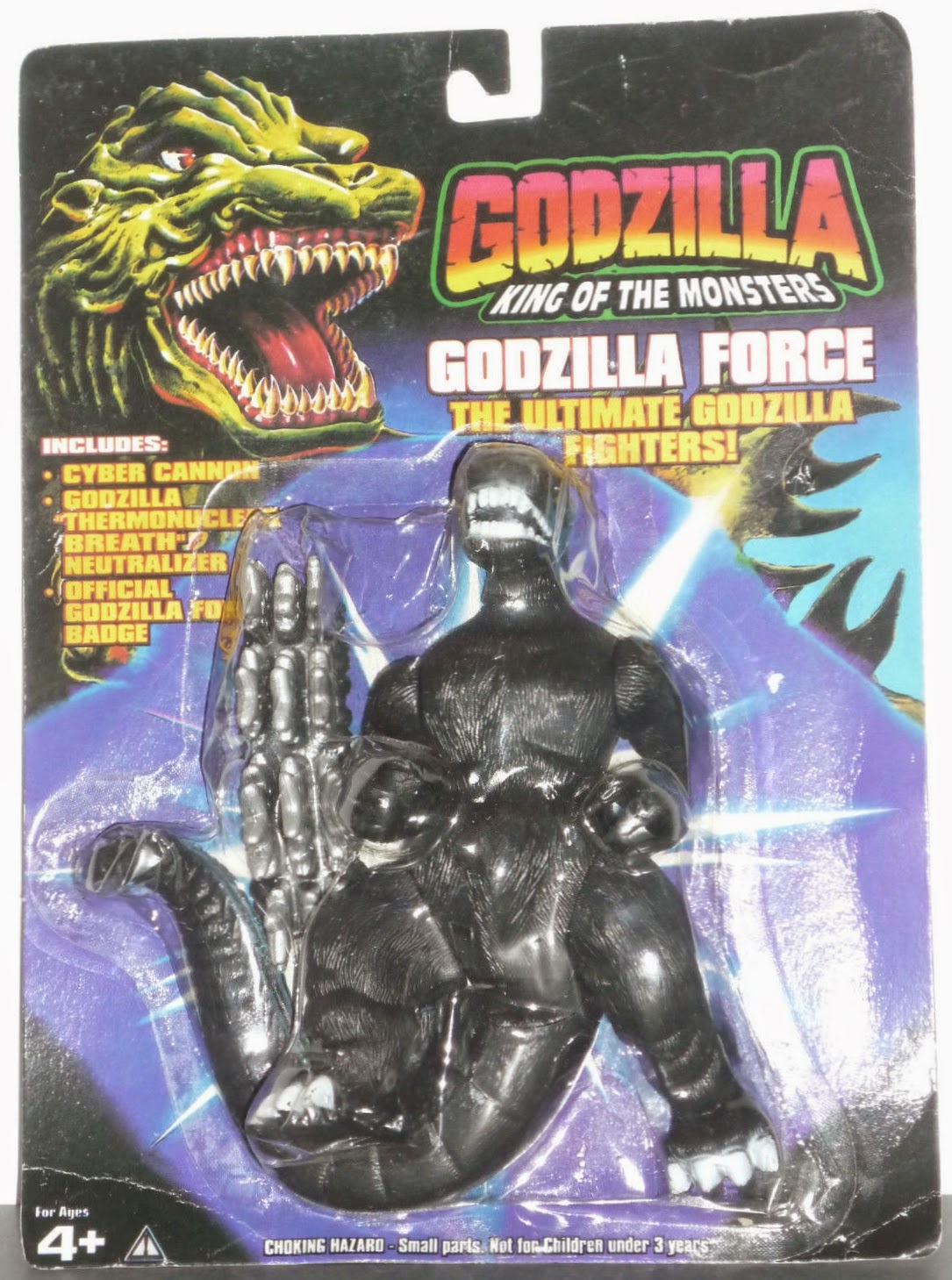 This is one of those items that was an inevitable buy for me...I can't resist the "FAIL" aspect of bootleg figures, but I have to admit, it's much less obvious on this piece.  You have to study it for a minute to get the full effect.
In short, this is a 6-inch Godzilla, which kind of looks like it's based on the Trendmasters "Power-Up Godzilla" that came with armor, but I don't own that figure to make a direct comparison...it's also possible that it's made from whole cloth, but usually that isn't how these sorts of things work.  A sloppy mold-over, maybe! 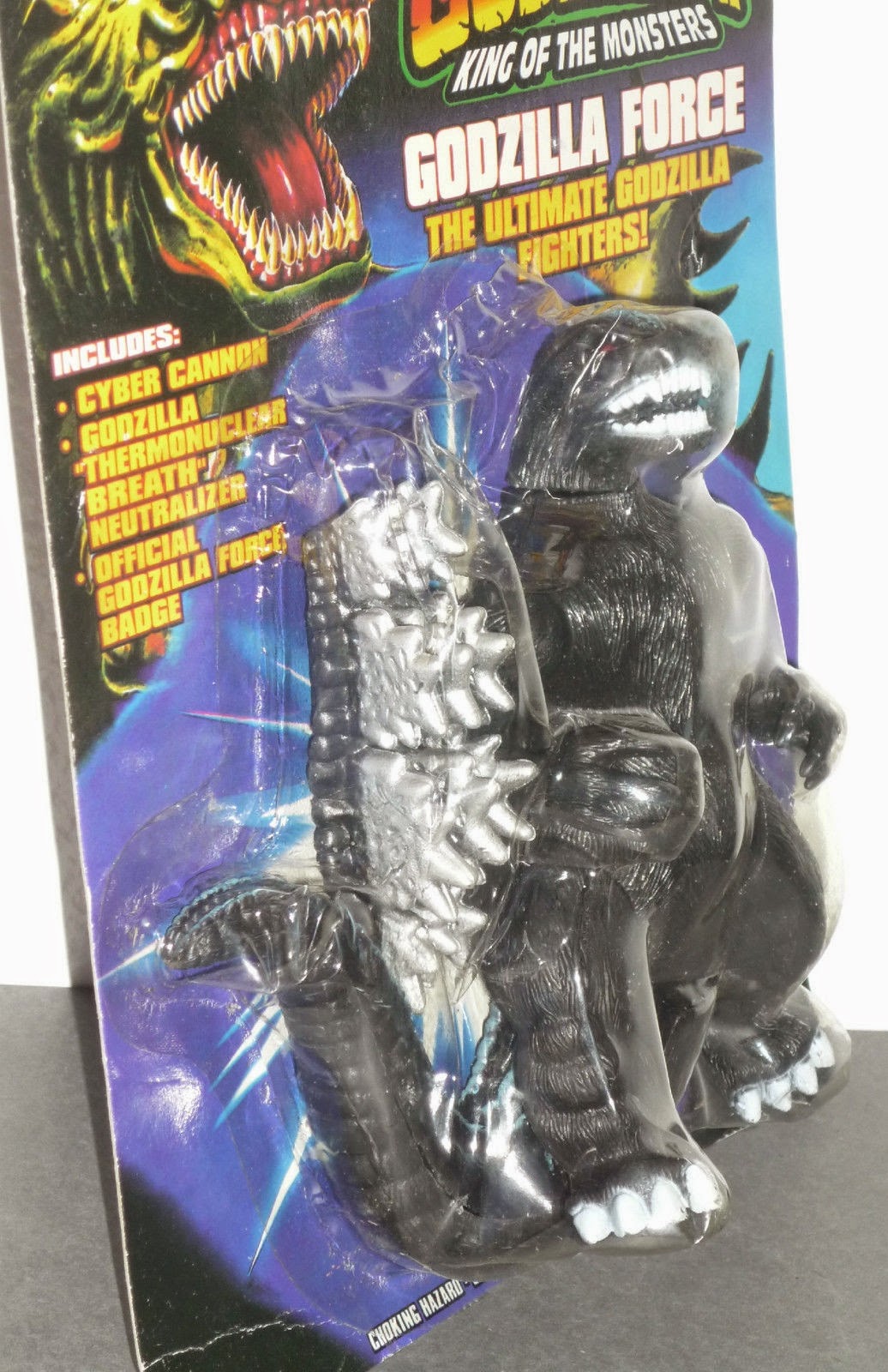 Note the detached, sideways tail, and the truly weird separated dorsal plates, which makes me want to see this thing assembled, but alas, it is the packaging that gives this piece its full impact.
Why? Because the backing card is a direct copy of the one from the "Godzilla Force" 4-inch figures. If you don't know, there was an attempt by Trendmasters in the mid-90's to introduce a human team into its Godzilla franchise, which pretty much failed.  Why would anybody buy a human figure, when there were kaiju to be had? They wouldn't! Anyway, they looked like this: 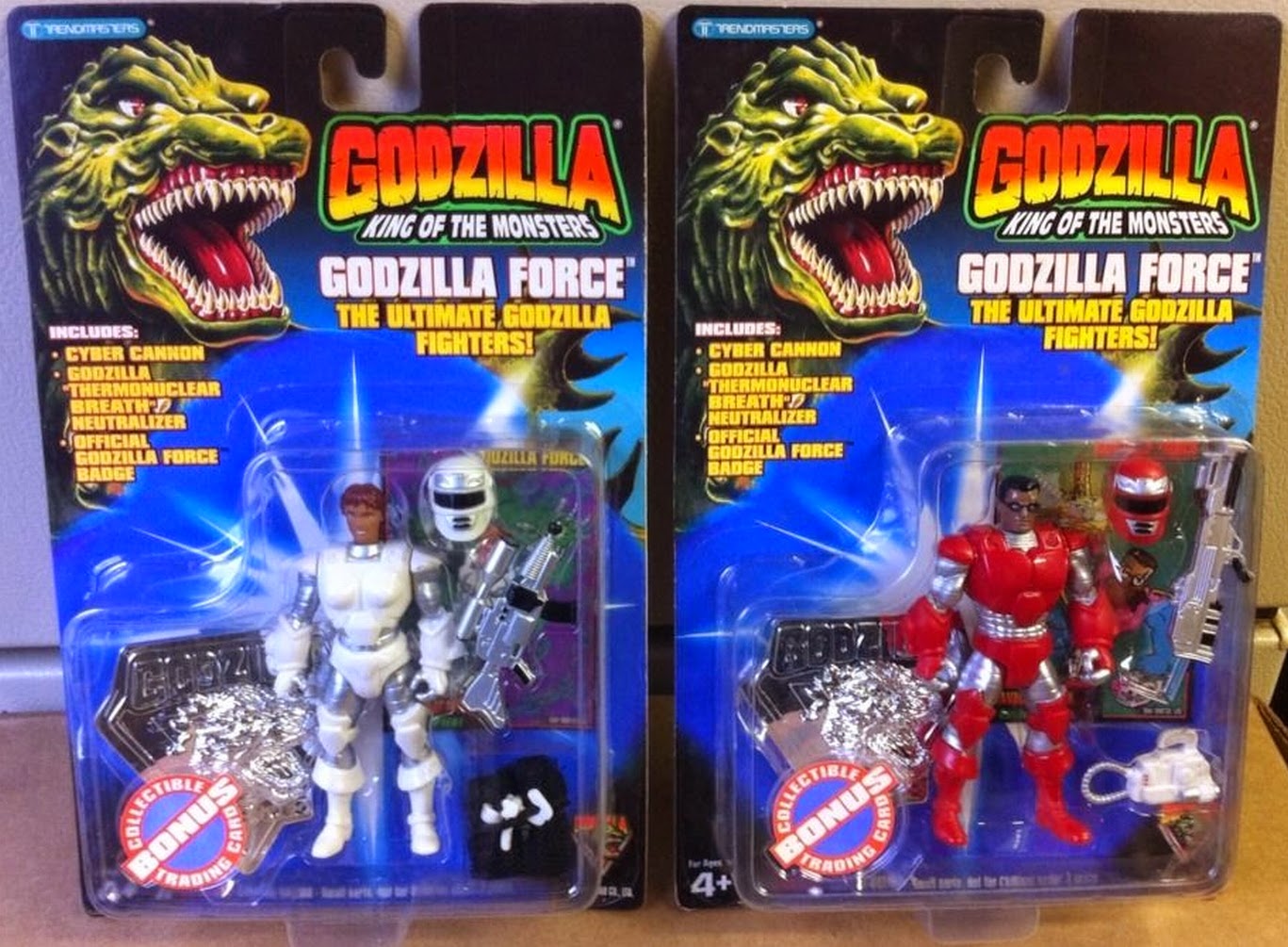 Which is all the more comical, when you read the text on the card, which should lead us to believe that either the bootleggers don't care, or can't read English.  Or both, come to think of it.  You will notice that two things are missing from our bootleg:  the TRENDMASTERS logo in the top left, and the "Official Godzilla" shield in the lower right.  Also, the bubble is completely different from any Trendmasters product, both in shape and in thickness--it's made of super-cheap plastic that is thinner than even the cheapest Walgreen's water bottle.
And now onto the backs of both products:
Both sides of the bootleg have a weird washed-out quality to the graphics, as you'd expect (stolen artwork, or photographic reproduction?).  The bootleg is actually a larger card (as you'd also expect), and has a white border around the back to take up some of the space.  Right away, you can notice there are no "Godzilla Points" (upper left corner)...and now that I think about it, I don't think these were ever used for anything, anyway.   This blank space in the upper left is used for something by our bootleggers, but even they cover it up with some warning labels: 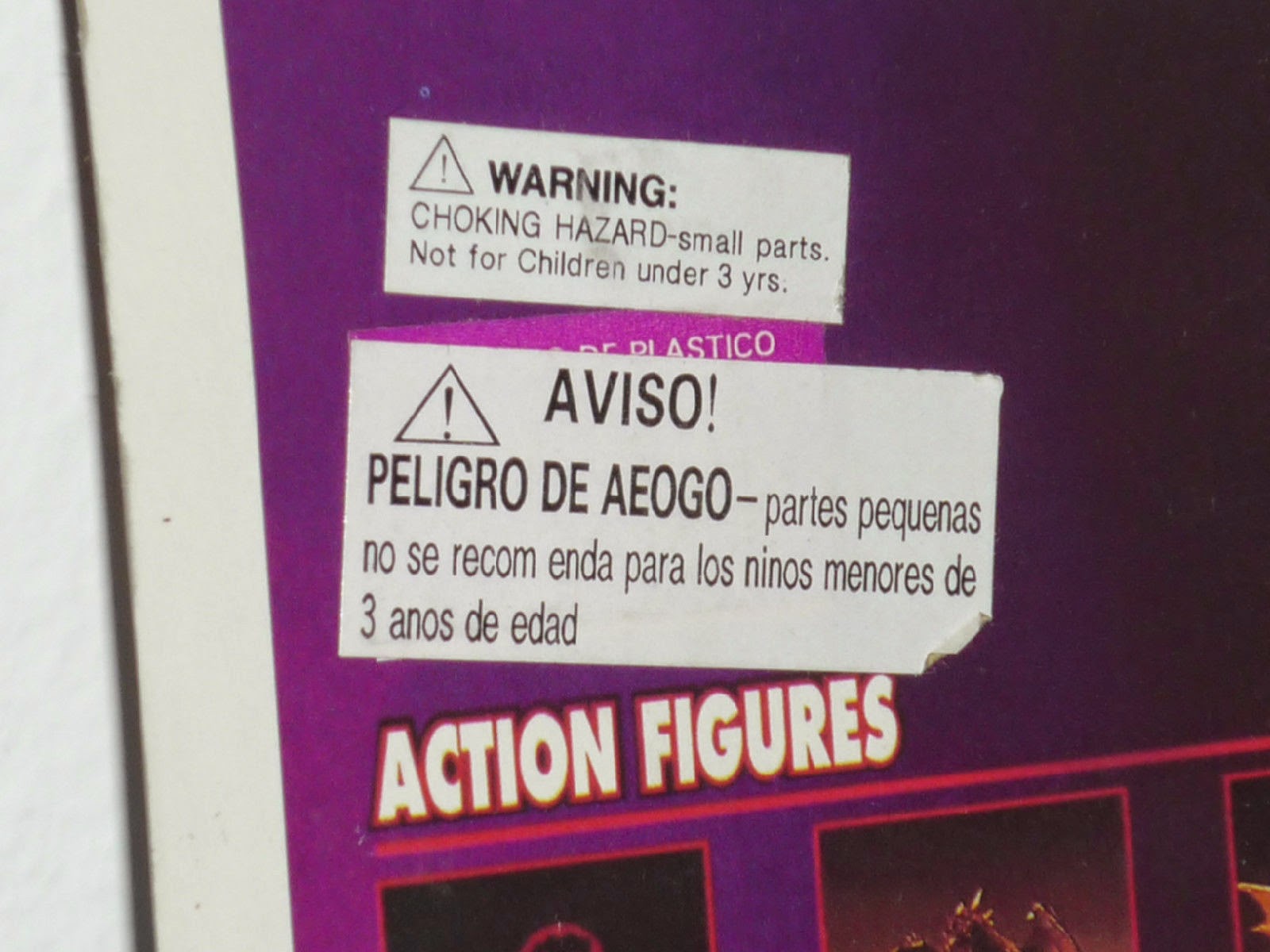 Which maybe is a clue that this is a toy of Mexican origin.  Who knows?
I tried to scrutinize the rest of the card, in the hopes of finding some hilarious Engrish, but it appears to be a direct reproduction, so no dice there.  The only other difference is the entirety of the very bottom:  the bootleg has no fine print, no Trendmasters indicia (of course), and no UPC barcode (also of course). 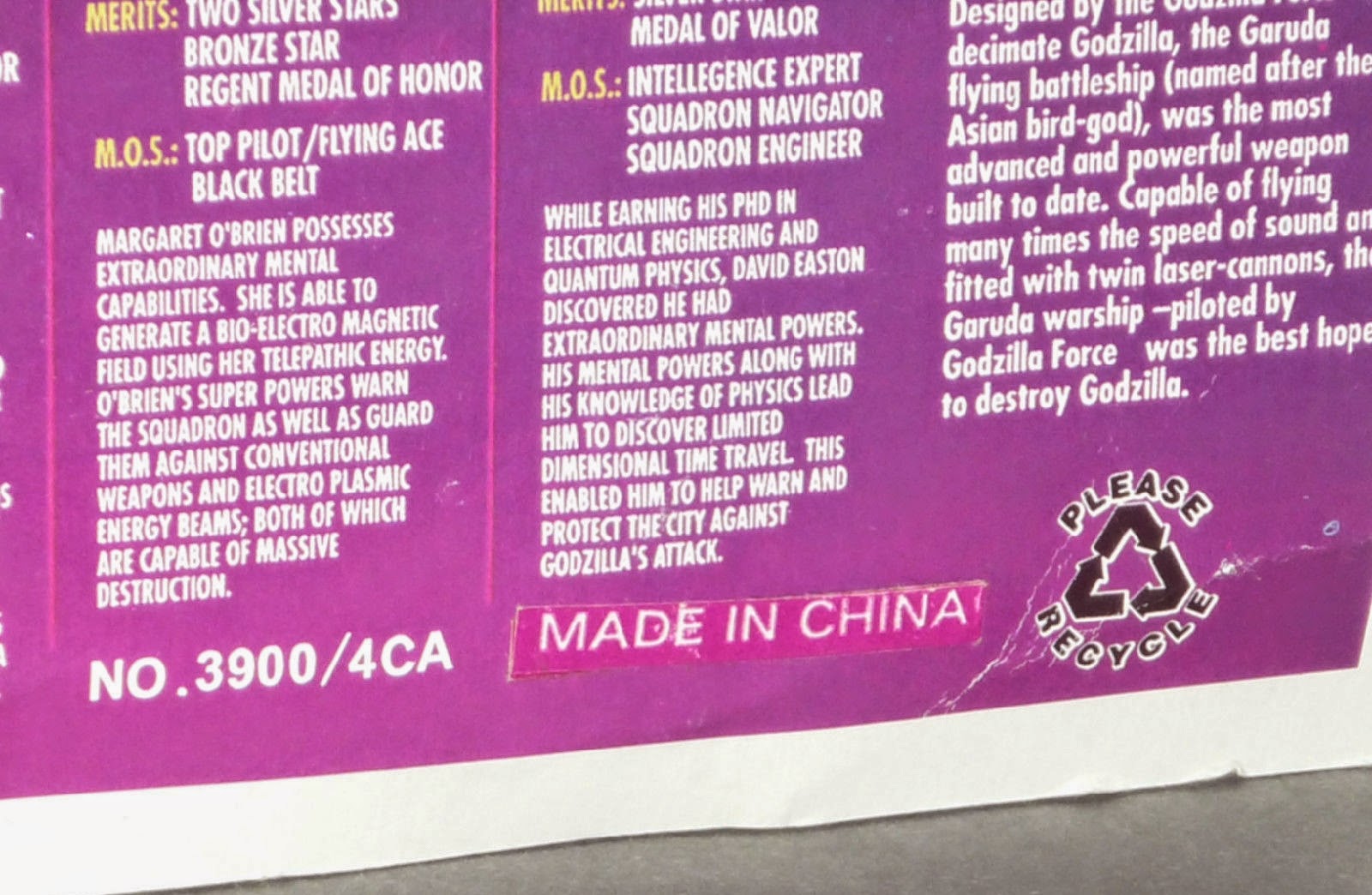 An added sticker says "Made In China".....and look, they've added the "Please Recycle" thingy! This is because, if you wait long enough, the inferior ingredients will recycle themselves, and they wanted to look environmental.
All in all, a very unique addition to my collection, and definitely something I haven't seen before!
Posted by Sampoerna Quatrain at 07:04 No comments: 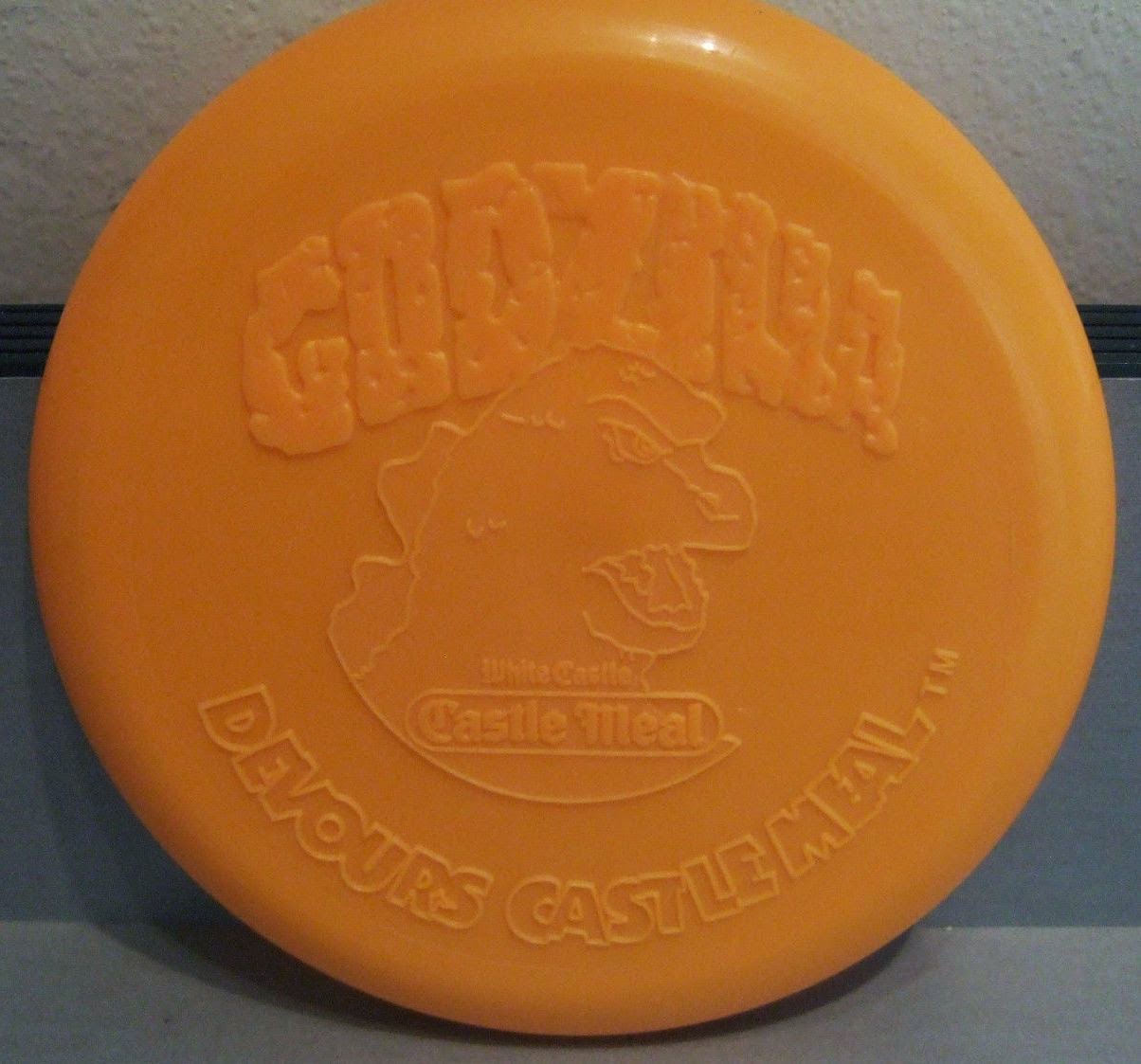 I didn't believe it either, mostly because there are no White Castle restaurants anywhere near me, but in 1990, there was a Godzilla Kids' Meal promotion at White Castle.  There were a handful of toys, including a figural water-squirter, a throwing-star device with suction cups, and this orange frisbee, which measures about 6 to 7" in diameter! 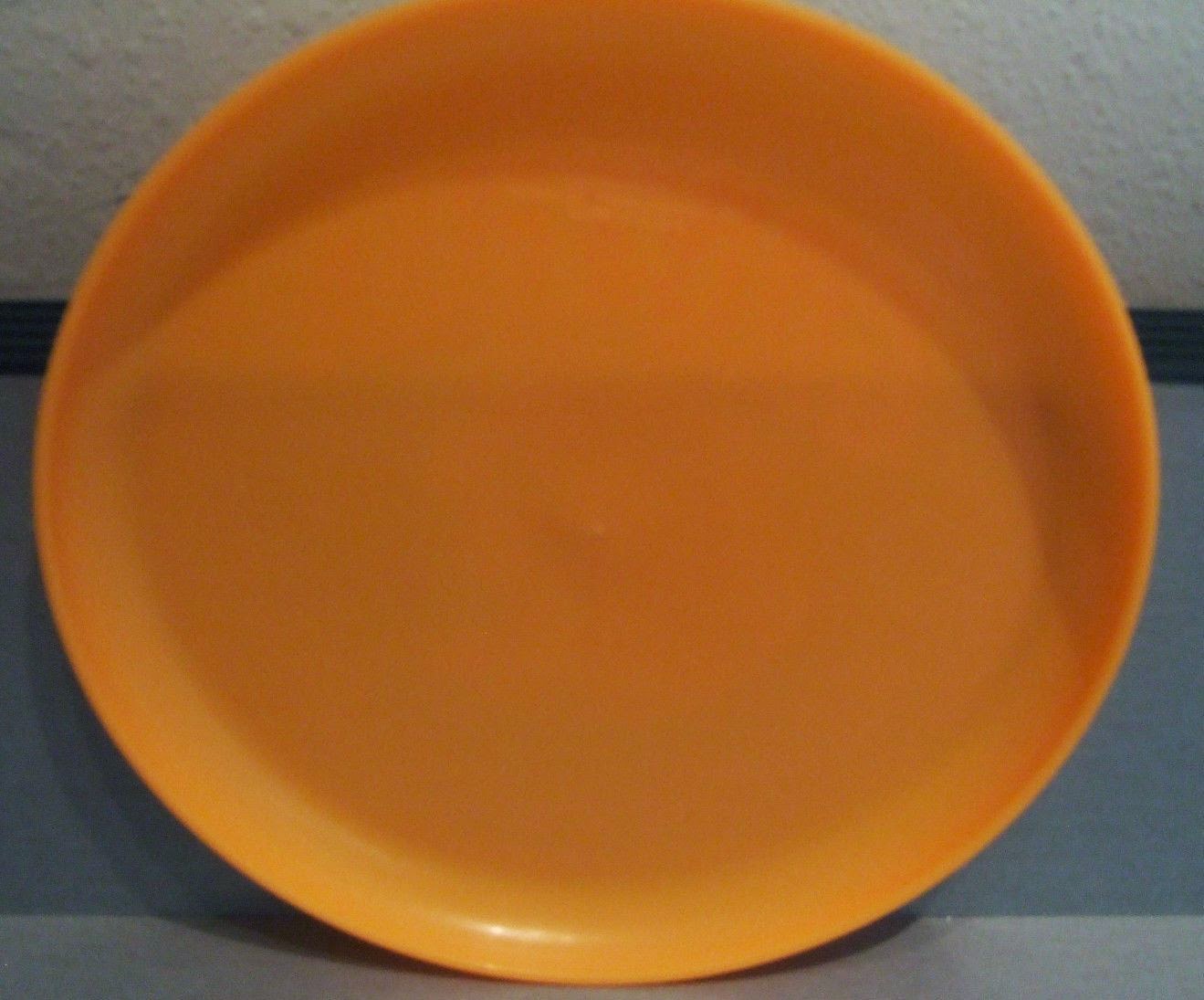 Posted by Sampoerna Quatrain at 06:27 No comments: