You can tell I've been going through old magazines lately.  I picked up a load of vintage STARLOG, FAMOUS MONSTERS, and things I'd never heard of (like one called FUTURE LIFE), and I've been enjoying finding random treasures.  Here are a couple:

Posted by Sampoerna Quatrain at 08:06 No comments:

Some of My Personal FAILs.... (part five: vacation)

While The Sphinx was closed, I was in the great state of Alaska.  The only thing about that--for our purposes here--that's important are a few of the bizarrities that I encountered there (coined a word, there).  This has nothing to do with the state of Alaska, mind you, but are still pretty entertaining:

Posted by Sampoerna Quatrain at 12:21 No comments:

Scanned from the back cover of FAMOUS MONSTERS #165....notice at no point are the words "Battlestar" and "Galactica" mentioned.  Now granted, in 1980, I would've worn the crap out of this.  Just not to "the disco." 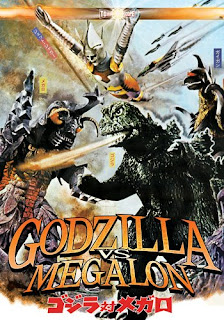 The Sphinx is open, once again....well, it was never closed, but I'm back from vacation, which is another story entirely, and doesn't suit our purposes here....but what does, though (to continue an impressive run-on sentence), is that my GODZILLA vs. MEGALON disc arrived in the mail yesterday, one day after its official release.  I haven't even broken the shrink-wrap yet, but rest assured I'll be viewing it at least once this weekend.
So why did it take months and months (and months) to finally appear? Well, I've read several stories that Toho was very upset about the recent DESTROY ALL MONSTERS Blu-Ray/DVD release, and that a few still photos in the bonus features were used without approval.  Whatever. This made the release of MEGALON delayed for eons, and there still isn't going to be a Blu-Ray release.  In fact, if Toho ever approves the content for the "Special Features" section of the disc, they said it can just be re-released as a "Special Edition." Really? They think we will all just buy it again? Well, I will, of course, but curse you George Lucas! See what you have started?!!
Another irony in this release is on the back cover, where it says that "the most elusive Godzilla film in North America" is finally getting released.  Um, I beg to differ.  I could give you scans of probably 20 (that's twenty; two-zero) different VHS releases over the years of this movie.  Now, granted, these were Public Domain, unauthorized editions from fly-by-night, car-trunk-sale companies, and the film looked like it had been rubbed down with sandpaper and left in the sun to fade, but it's been out there.  The film played in American theaters (with actually a bigger promotional campaign than most Godzilla films), and was shown on NBC television with John Belushi hosting.  It's been treated to an amazing Mystery Science Theater 3000 episode, which was even released on DVD for about 4 minutes and thirty seconds.  And that wasn't the only DVD outing--there have been a handful of PD releases, from the same companies described above, and in the same quality.
So, what they are saying is, the film has been impossible to see in GOOD QUALITY in the United States, right? Nope; the now-dead Sci-Fi channel even showed a LETTERBOXED, crisper print off and on for quite a while.
So, as you can see, it's been probably the EASIEST Godzilla film to see in America for quite a while! But at the end of the day, we now have an official release, which promises to be the best quality yet, and I'm glad for it.  It now makes 26 out of 28 Godzilla movies released on DVD in the United States, and 100% of the classic series running from 1954 to 1975.  In my opinion, the remaining two (GODZILLA 1985 and GODZILLA vs. BIOLLANTE) would make an excellent 2-disc set, if the rights issues can ever get worked out!
By the way, I unabashedly and unashamedly love this movie.  It gets a bad rap from time to time, but if you compare it to 99.5% of anything that Hollywood has ground out in recent years, you may agree with me.
ADDENDUM: After viewing the DVD this weekend, you won't be surprised to hear me say it's a must-buy, but that was never in dispute.  Picture quality is the best this film has ever looked, and you can choose from Japanese with English subtitles, as well as a 2.0 track of the much-ridiculed English dub (which is actually Toho's International dub, so don't blame the U.S. for that one).  My only complaint was the quality of the audio on the English dub wasn't perfect, but I'm sure there wasn't much to work with other than mangled old prints.  There are no special features, as previously discussed. It's nice to be able to toss TWO of my previous DVD-R copies of this film, and replace it with one. Thanks, Tokyo Shock!
Posted by Sampoerna Quatrain at 08:33 No comments: 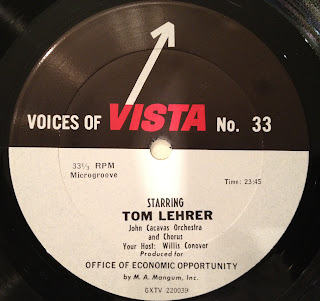 Final post before vacation, but it's a good one. A mega-rare good one!
It's a bit tricky to explain, and I will refer you to the Wikipedia article on VISTA (without sending you to a Microsoft article accidentally), but basically VISTA, which stood for Volunteers in Service To America, was sort of like the Peace Corp, but in this case, the volunteers did their work domestically, rather than overseas.  It was founded by LBJ's office in 1965, and sort of doesn't exist anymore, and sort of does.  Like I said, it's tricky. Also, there's the Veterans Information Systems and Technology Architecture, but that's something else altogether and a horse of another color.
But for our purposes here, you just need to know that there was a weekly radio show, which went out on 12" LP's, and featured whoever would donate their time, energy, and material to support the cause... and that Tom Lehrer was featured on side one of LP #33.
I love to debut first-time-ever-on-the-Internets items here at The Sphinx.  Rather than sit on this gem and try to slowly build up a Tom Lehrer Rarities Volume 6, which may or may not ever even happen, I'm debuting it now, for your enjoyment.
I will say, though, that while it contains a great interview, there are, sadly, no original performances.  Instead, three cuts from THAT WAS THE YEAR THAT WAS are played (with the treble jacked up to the high heavens for some reason):  "Pollution," "New Math," and "MLF Lullaby."
A note on the date:  Reading the Wikipedia article, VISTA was begun in 1965, and I seriously doubt that this particular program could have been put together before 1966, especially if it was actually the 33rd one.  Mr. Lehrer refers to the TV show ("That Was The Week That Was") folding, and my guess is this interview was recorded in 1966.  Or maybe veeeeerrrrrrryyyyy late 1965, but I'm going with '66 personally.
Please enjoy this rare-as-hen's-eye-teeth rarity! When I get back from vacation, I need to share the contents of a second letter I received from the great man himself, where he was kind enough to answer a few questions for me about the remaining rarities out there that exist!

NOTE:  Please see elsewhere on this very blog for many other Tom Lehrer rarities!!
Posted by Sampoerna Quatrain at 08:04 2 comments: