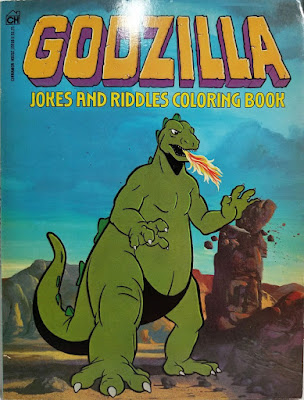 Here is an exquisite rarity that I learned about last year, when I missed out on a Japanese Yahoo auction due to the time difference.  I had known about the other three Cinnamon House activity books, which I own:  Godzilla Dot-To-Dots (has a very similar cover), Godzilla Search-A-Word Shapes, and Godzilla Puzzlers, which all three also came out in 1979.  We will have to do a post on them at some point--all four of these books are pretty rare! And, there are very few items tied to the Hanna-Barbera cartoon. 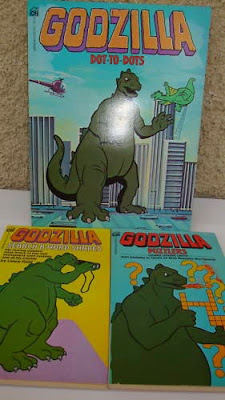 The premise of this coloring book (unused, thank goodness) is exactly what the title says.  Pages to color, interspersed with several original, but really bad jokes.  This would have been right up my alley in 1979, but even small me wouldn't have told some of these.  Let's take a look: 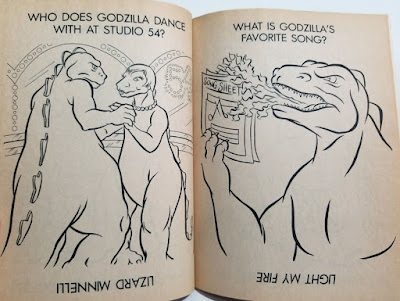 Lizard Minnelli? What kid is going to get that? Or, Studio 54 for that matter? Wait a second, what was that? 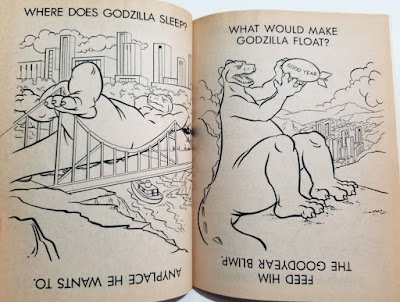 Another phoned-in oldie on the left...on the right: it's funny to stop and think about how omnipresent the Goodyear Blimp was in the 1970's.  It was a huge deal at the time. 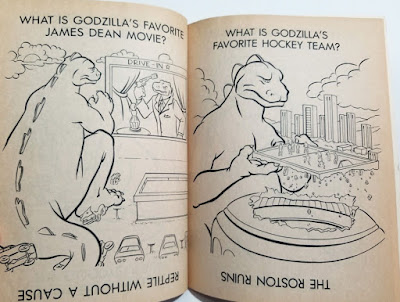 Both of these are confusing...Roston Ruins? Did this turn into the Scooby Doo jokebook? I do like the way Godzilla is sitting on cars at the drive-in, but I'm not sure the illustrator had seen REBEL WITHOUT A CAUSE, to come up with this: 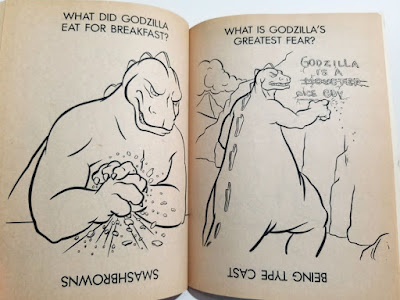 I'd like to say the bad puns are over, but...Smashbrowns. The worst joke, to me, was a page that didn't get photographed...no amount of discussion can prepare you for this, so here goes...get ready:

Why did Godzilla get divorced?
Because he's a home-wrecker.

Really, Cinnamon House? You just did that?

Posted by Sampoerna Quatrain at 09:04

For the "Godzilla Jokes and Riddles Coloring Book" it was just these 13 pages and the one that you didn't post, or were there more in the coloring book? And though you are busy, any chance that the other three Cinnamon House activity books will be uploaded?

I like to think that this is what the Hanna-Barbera version of Godzilla got up to before Godzooky came into his life and then the Calico crew. He was a bachelor and the whole world was his pad.

No, it was a full-sized coloring book; I was just too lazy to take my own photos, and I used all of the ones from the original Ebay auction!

It would be a ton of work to get all of the Cinnamon House books photographed or scanned, but they would be a great addition to this blog, because they are very rare and they certainly aren't anywhere else on the Internets...I will put it on my list to do. Thanks for your comments, I love your idea about bachelor-pad Godzilla; I would watch that show!

The "Jokes and Riddles Coloring Book" being scanned can be crossed off the bucket list: https://shop.retroreprints.com/godzilla-jokes-riddles-1979-cinnamon-house.html

It can be purchased without auctions.
So that's one book down about this version of Godzilla.

Wow! Maybe the other three books will end up on that site. Thanks for pointing that out!