I've really lucked out in the last few weeks, and obtained some treasures. I never thought I could be patient enough to wait for these particular items to finally become available, but I guess patience really does have a value after all. 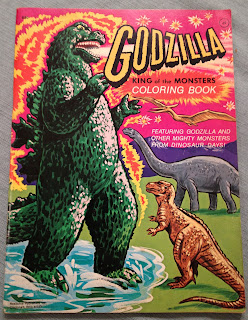 First up, here is the GODZILLA, KING OF THE MONSTERS coloring book, published by Resource Publishers in 1977.  This is another of those things that I would have devoured as a child, but never knew it existed.  It's an interesting book, beginning by concentrating on Godzilla and his abilities, and then sort of turning into a book about various dinosaurs in the process.  They actually say that Godzilla is a particular dinosaur (an Allosaurus, I believe), and then use that as a transition.  "Therefore he would have met these other interesting dinosaurs..." Of course, in the pages about Pterodactyls, there is no mention of Rodan...heck, there's no mention of any other kaiju with dinosaur characteristics, like Angilas or Gorosaurus.  So, that shows you how limited Toho licensing was at the time.  The strange thing is, there are three full pages of black and white, actual movie stills randomly placed in the book, from GODZILLA's REVENGE and SON OF GODZILLA, so other kaiju do appear, such as Minya and Gabara, they just aren't acknowledged.  Weird. Either way, I've been dying to add this vintage jewel to my collection, and thrilled to finally do so. 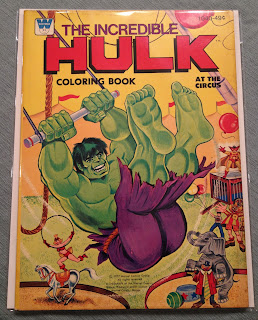 As a bonus, I bought it in a lot that included another gem, a 1977 coloring book published by Whitman called THE INCREDIBLE HULK AT THE CIRCUS! That one's a riot.
And now to the issue of the final movie poster, and a bit of a history lesson.  An interesting thing happened when 1974's GODZILLA vs. MECHAGODZILLA was brought to the United States.  With the mid-70's mania surrounding ABC's "The Six Million Dollar Man" (and later, "The Bionic Woman" of course), the distributors decided to change the title to......GODZILLA vs. THE BIONIC MONSTER.  Well, this went over like a diaper in the proverbial punchbowl, and ABC promptly leveled a lawsuit at Cinema Shares.  After all, the use of the word "Bionic" would clearly be confusing to the ignorant movie-going public, who would pay for tickets fully expecting Godzilla to be battling Steve Austin, right? Right? Well, that makes no sense to me either, but let's keep moving.  The film had already been released, and although I'm sure plenty of posters were printed, I betcha that tons of them were recalled or destroyed.  I lucked into one recently, and am quite proud of it. 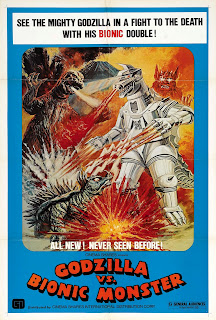 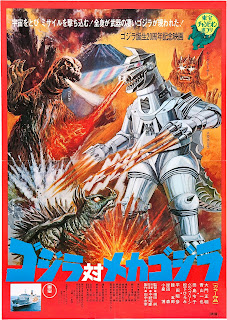 Note the unusual use of the artwork from the Japanese poster; this was a rarity for American posters, and you can tell it was done with permission when you compare it to the Japanese one.  In other words, they received original elements, or else it would have been cropped much more severely to hide the Japanese title and other stuff.  Now, even though it's completely awesome, I have to complain a bit about the overachieving aspects of the painting.  It is really trying to be way too much at once....note how Mechagodzilla is firing from every orifice of his body, Godzilla is blasting him back, and yet they still tried to cram in Mount Fuji, as well as a spectral, floating demonic "thing" in the background that is supposed to be King Caesar, but where the rest of his body went, I have no idea.  And poor Angilas' eye is blank, as if he's been blinded from the fifty explosions all around him!
Fast forward a bit, as the distributors cave into ABC's deep pockets, and speedily re-title and re-release the film as GODZILLA vs. THE COSMIC MONSTER.  (No word on whether the Silver Surfer tried to sue them over use of the word "Cosmic.")  This may seem like an unnecessary slap in the face to kaiju fandom, but it resulted in one of the greatest paintings ever done for a movie poster in the history of God's green earth. 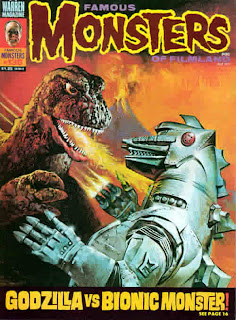 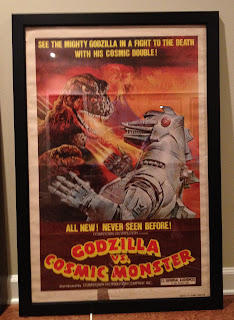 My photo isn't exactly stellar, but no doubt you are familiar with the work, painted by Basil Gogos. (It was also used for the cover of FAMOUS MONSTERS #135 in 1977). Without a doubt, this is one of the best depictions of Godzilla I have ever seen.  He didn't just capture the facial expression and design of the particular suit; he nailed it.  And the Mechagodzilla is equally stunning, right down to the MG on his arm.  Just note how much better the action is, compared to the Japanese painting.  The two are locked in combat, and MechaG is firing an entire volley of finger-missiles too late, as Godzilla closes in, while the first poster is simply everything blowing up.  It's like comparing a Michael Bay movie to...well, a real movie.


This probably goes without saying, but while I will treasure the BIONIC poster as a historical rarity, the COSMIC one is going on display in my final bit of wallspace!
Posted by Sampoerna Quatrain at 07:39 No comments:

Labels: Godzilla, Movie Posters, Vintage
Newer Posts Older Posts Home
Subscribe to: Posts (Atom)
Snake and Boris welcome you to a mysterious old tavern called The Sphinx. Here we will discuss many interesting things. You will notice many signs on the wall. One says, "A splendid time is guaranteed for all," and another, "An acorn is just another nut in a beret."