Here is an item that I didn't even know about back in the day (the Trendmasters day).  My suspicion is because it wasn't kept in the toy aisle, but in some sort of "housewares" or kitchen aisle. 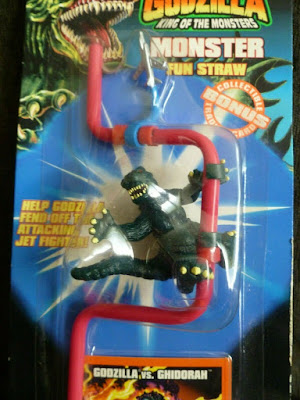 It's the sort of fun collectible you might expect to see in Japan, rather than the US.  The card says "Help Godzilla Fend Off the Attacking Jet Fighter!" which encourages you to spin him around (and the jet too!) while you use the straw, which is nothing short of adorable.  I should point out that the sculpt of Godzilla used here is very dynamic, and was used nowhere else, to my knowledge.

The back of the card shows the beginning line-up of Godzilla toys that Trendmasters produced in 1994. 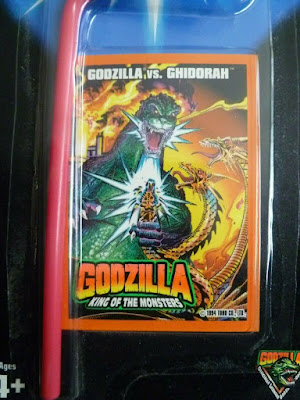 Another part of a Godzilla toy made by Trendmasters was the included trading card.  The company was diligent to include one with nearly every single product, even if it wasn't an action figure and didn't quite match the item, as shown above.  These cards are prized by collectors, and rarely come up for sale.


A few of their non-action-figure products were known to include different possible trading cards from the series; in other words, you could collect a variant of the straw above, with a "Godzilla vs. Rodan" trading card (which does exist), and probably others too!

One thing that continues to amaze me about the Trendmasters line (and it's been just about long enough for the 90's to become desirable and nostalgic) was how large it was.  Like me, you probably remember a modest amount of figures, but then it dawns on you how many sizes they were available in, not to mention the variety of other products they produced...and occasionally, if you research the subject, you might discover one that you never knew about!
Posted by Sampoerna Quatrain at 06:55 No comments:

Labels: American Toys, Godzilla, Trendmasters
Newer Posts Older Posts Home
Subscribe to: Posts (Atom)
Snake and Boris welcome you to a mysterious old tavern called The Sphinx. Here we will discuss many interesting things. You will notice many signs on the wall. One says, "A splendid time is guaranteed for all," and another, "An acorn is just another nut in a beret."