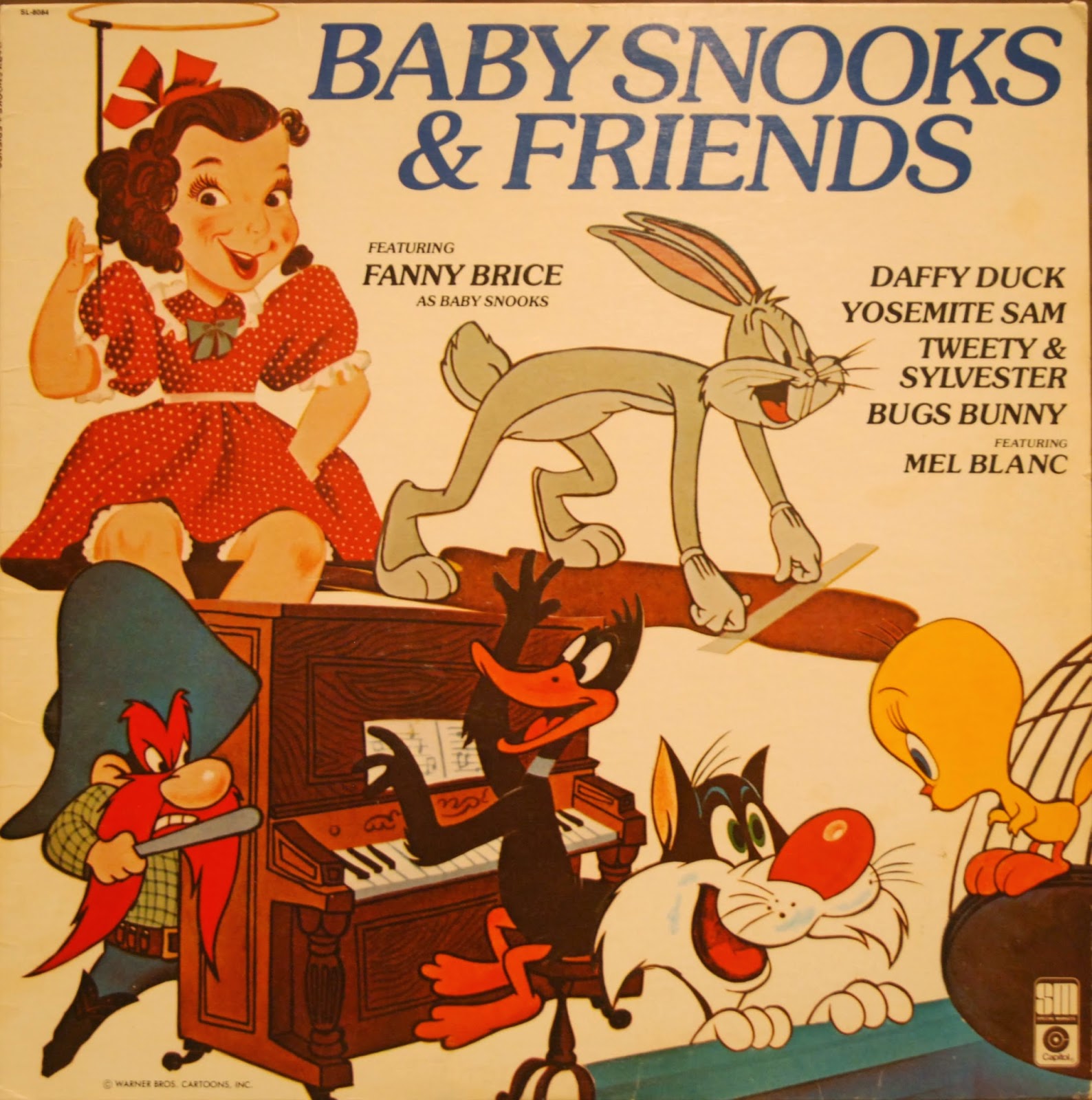 This is one of those album covers that make you do a double-take, when you are flipping through LP's at your local thrift store.  This is a weirder team-up than that time Spider-Man was paired with the first cast of Saturday Night Live (in MARVEL TEAM-UP).
But of course, this is a compilation album, and the only thing shared between Baby Snooks and the Warner Bros. characters is the cover.  In fact, the contents of both sides of this disc were first released by Capitol's "Bozo" subsidiary in the 1940's and 50's. 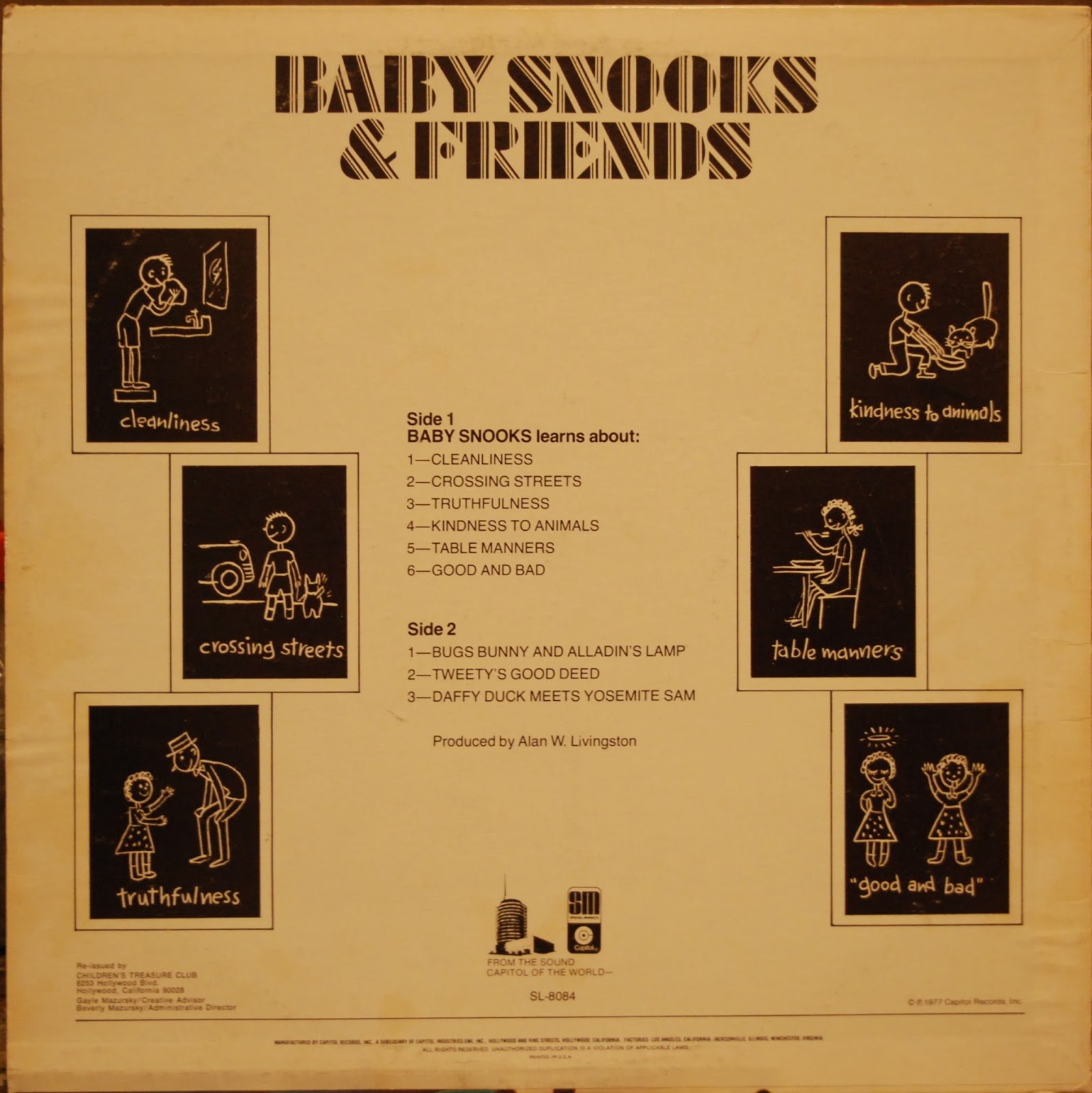 I have to confess, even though I grew up listening to OTR, and heard my share of Fanny Brice, Baby Snooks is somewhat lost on me, and it makes it all the worse to have her cloyingly sing to me about not crossing the street, or taking a bath...and, why in the world is her name "Baby Snooks," when she is old enough to attend school, and has a baby brother who is an actual infant? 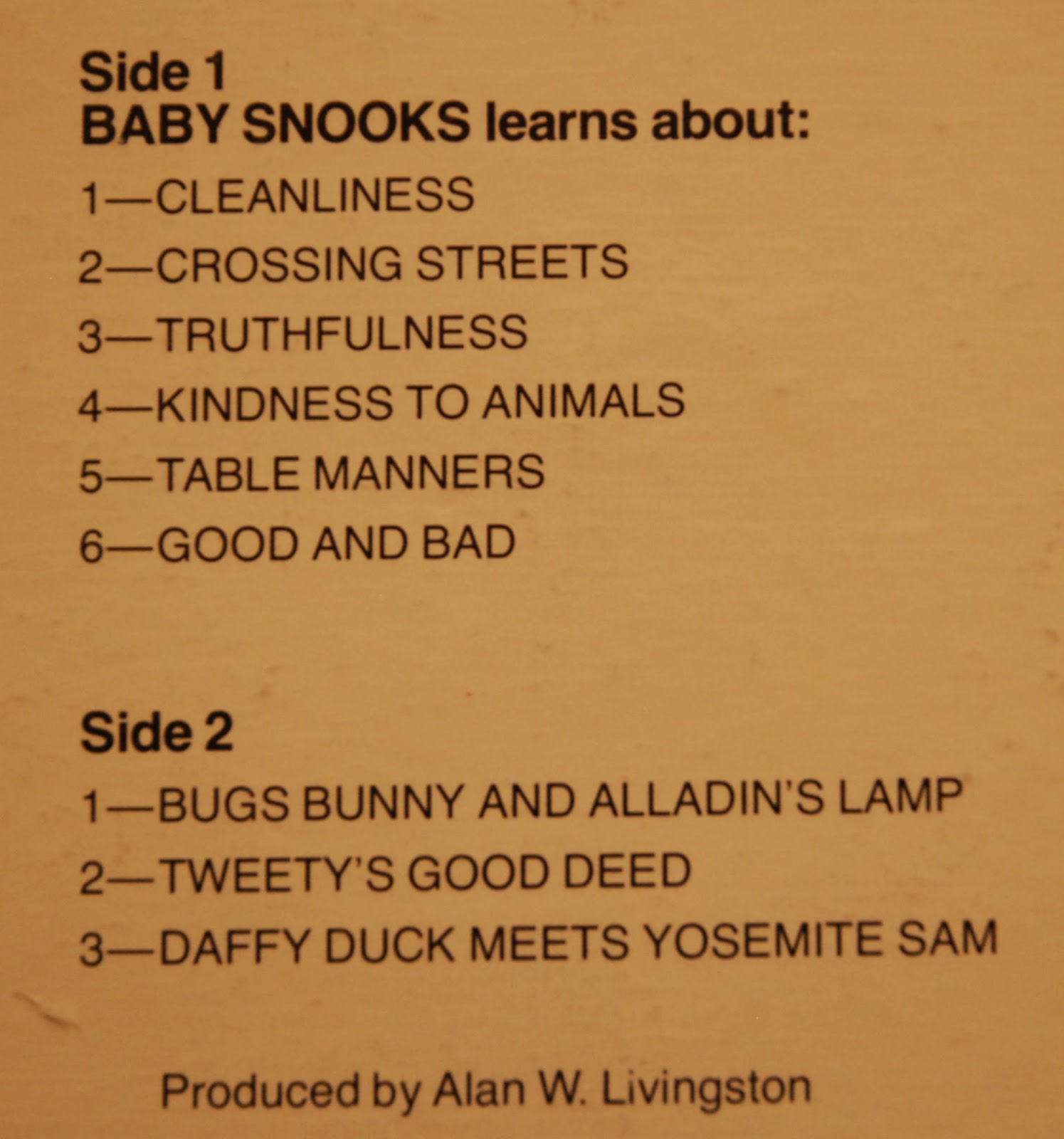 Also, there are a few interesting moments where she receives more than one earnest spanking from her father. And if that's not awkward enough to listen to, see if you can keep from squirming when her father wrongfully accuses her and allows himself to be the recipient of a spanking...wow.
Side 2 has three Looney Tunes adventures,voiced by the incomparable Mel Blanc, and the last two were new to me.  Interestingly, at least one other uncredited voice artist shows up (for one, as the uncle of Yosemite Sam, which according to a website was Pinto Colvig)...which reminds me, I swear that Arthur Q. Bryan (voice of Elmer Fudd) appears on the Snooks side, as a man who nearly runs over Baby with his car (too bad he missed)!

Posted by Sampoerna Quatrain at 18:15 4 comments:

I recently picked up two unpunched examples of another size of the "Godzilla Three Dimensional [sic] Stickers" made to promote the Hanna-Barbera animated series.  These measure 3.5 x 8.25" and have header cards of two different colors. 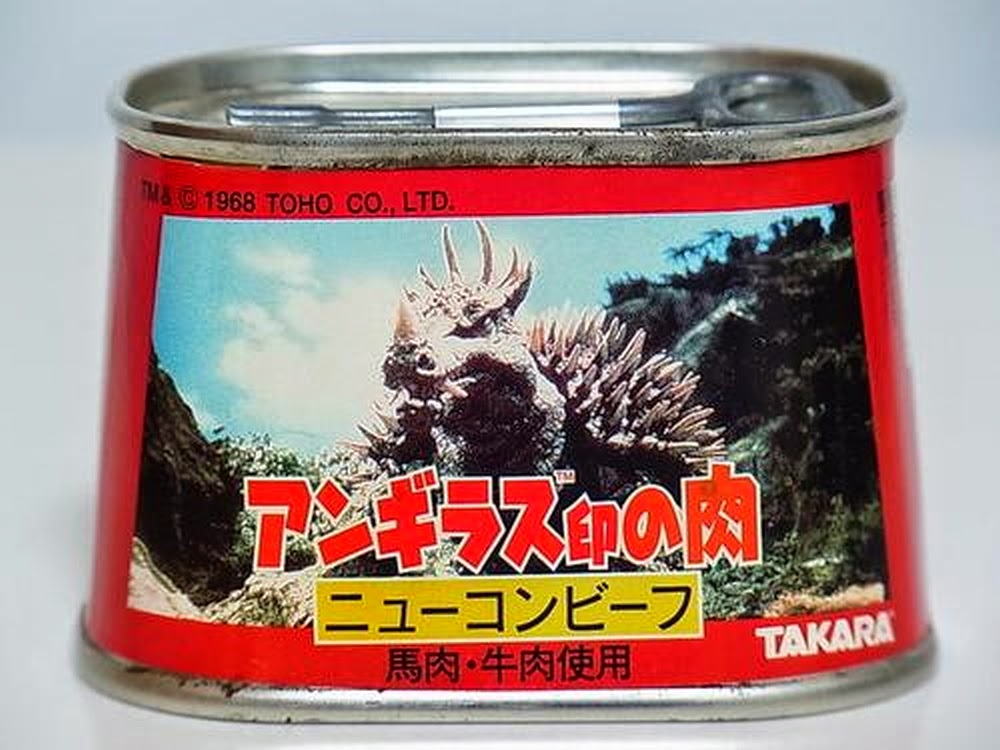 Concluding our tour of the backwoods of Ebay, here are a few final Godzilla items that you probably haven't seen before.  First up, a weird series of "Canned Kaiju," made by Takara.  You will note that they come in a sealed metal can, complete with can opener on the lid! My understanding is that there was a plush kaiju inside, but anything is possible. 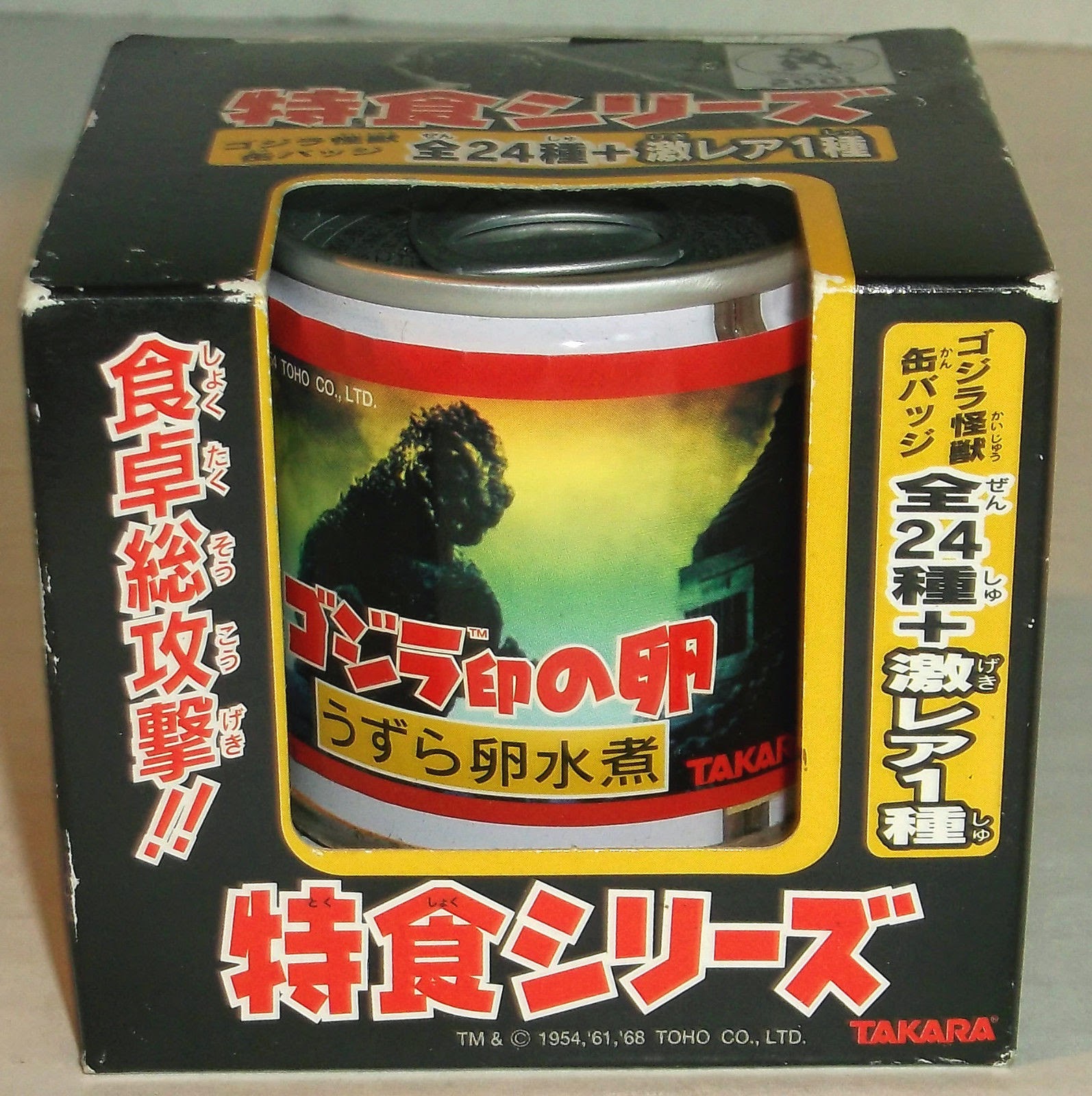 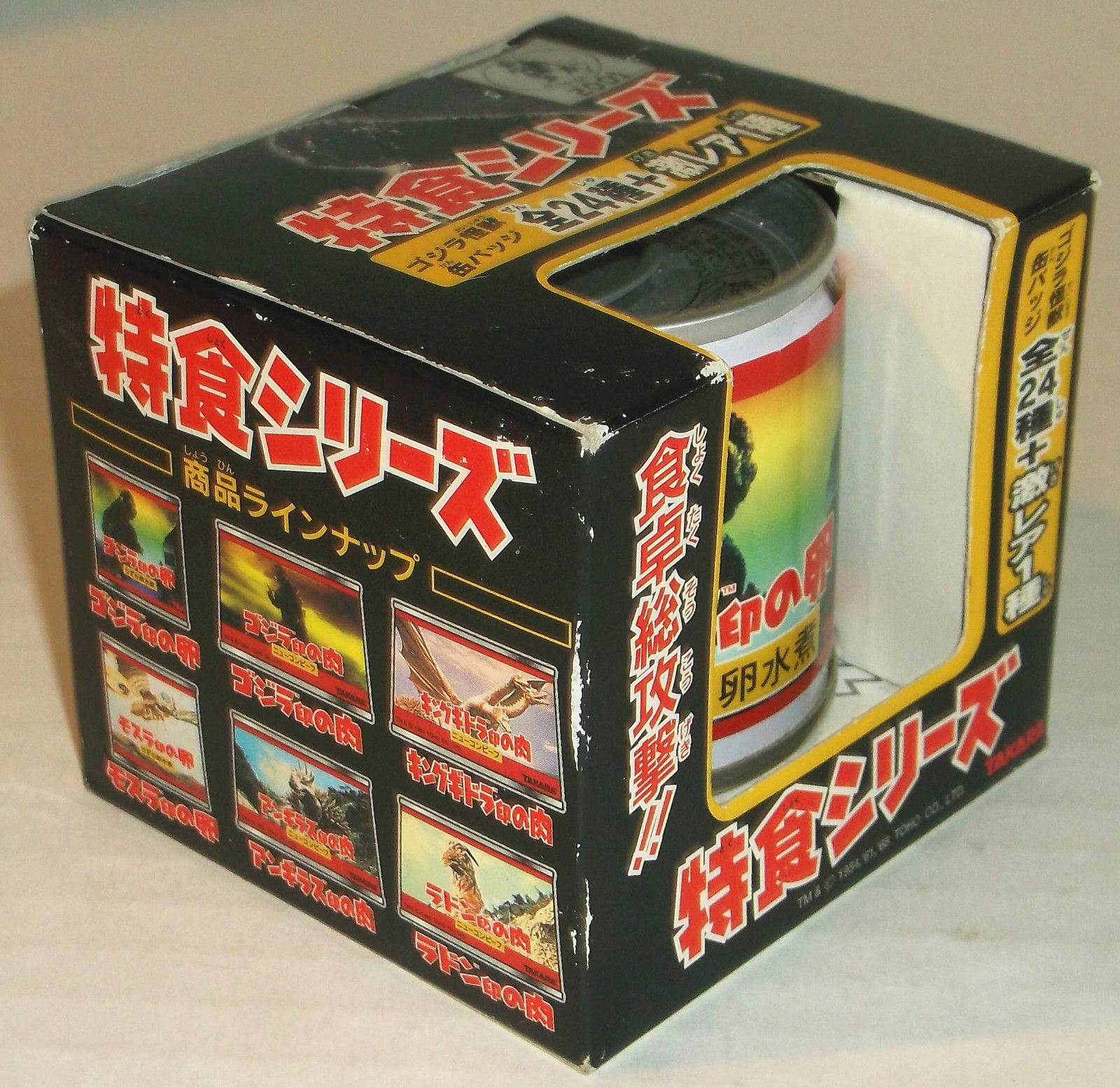 Here are two photos of another one, canned Godzilla.  You can see from the box that there were six! Anybody knows what was in the cans, post it here....it would be hilarious if it was potted meat, but then again, I'd rather have a stuffed animal. 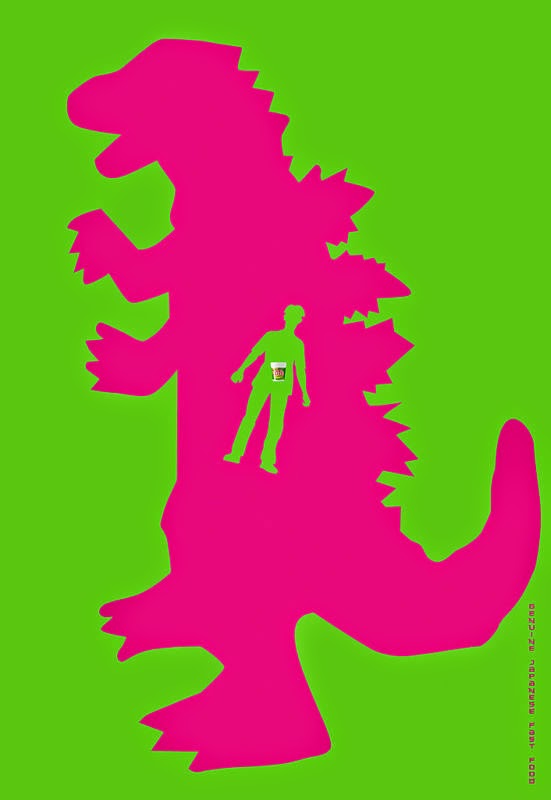 This is a poster that's a very clever ad for a "Cup O'Noodles" product. 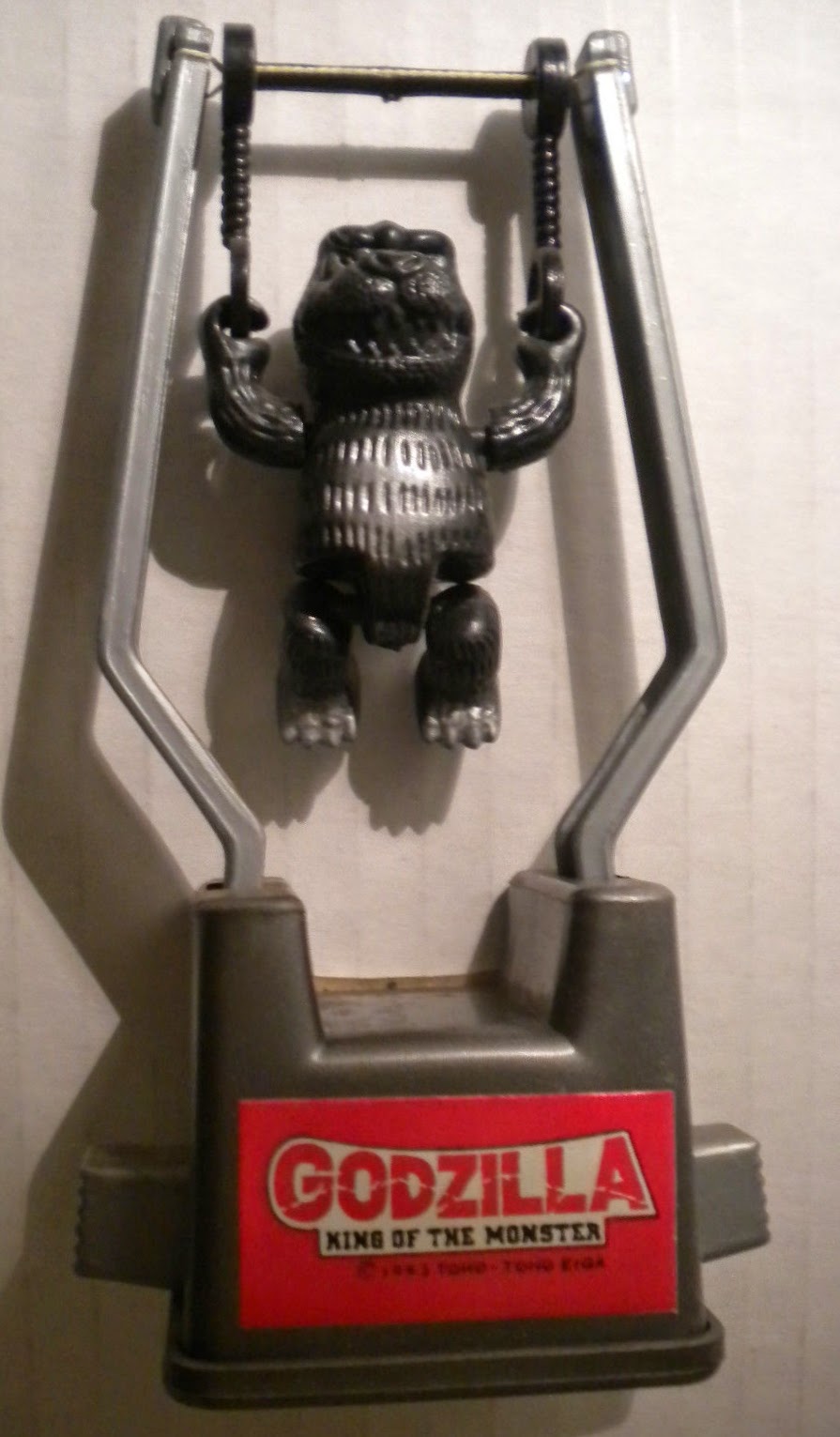 You've seen these "swinging character" toys.  I even have a Mickey Mouse one from the mid-to-late 70's, when I was small.  There's an Ultraman one on Ebay also, that is equally adorable. 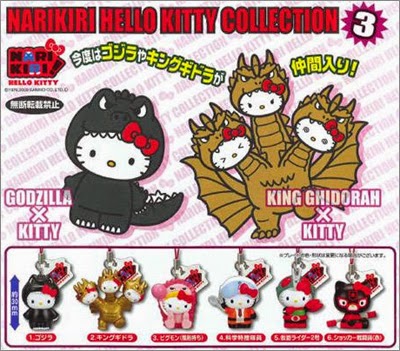 Oh, Hello Kitty, ambassador of Japan.  She really deserves the credit for bringing lots of Japanese pop culture to the West.  She's the Marco Polo of kawaii.  (Wait, that was China.) 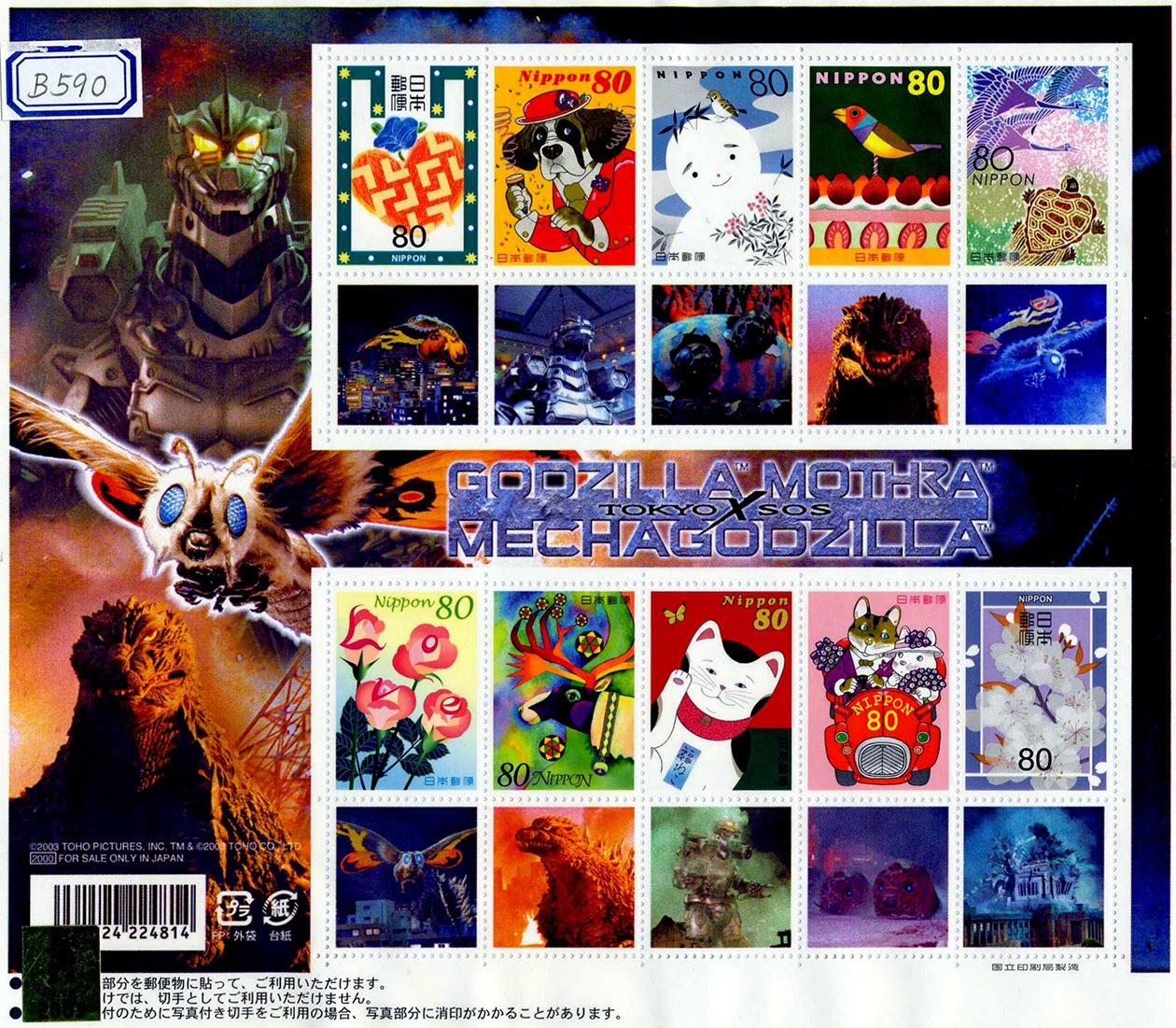 Here's an interesting sheet of stamps, issued at the time of TOKYO SOS...Kind of a rip-off though, as they only used half of the available space to place movie images.
From 2011, here's a sheet of stamps dedicated to the work of director Honda! They are awesome, and from...........Mozambique? Wait, what?
Here's a full-page ad for Aurora monster models that appeared in the NEW YORK TIMES in 1966.  Godzilla only gets a tiny appearance at the bottom, but it was too cool not to include here.
And finally, anyone on the Internets knows that there's a huge market for fan-made, gray-area products, especially T-shirts, and there are several out there with excellent art!  Here are just a few. 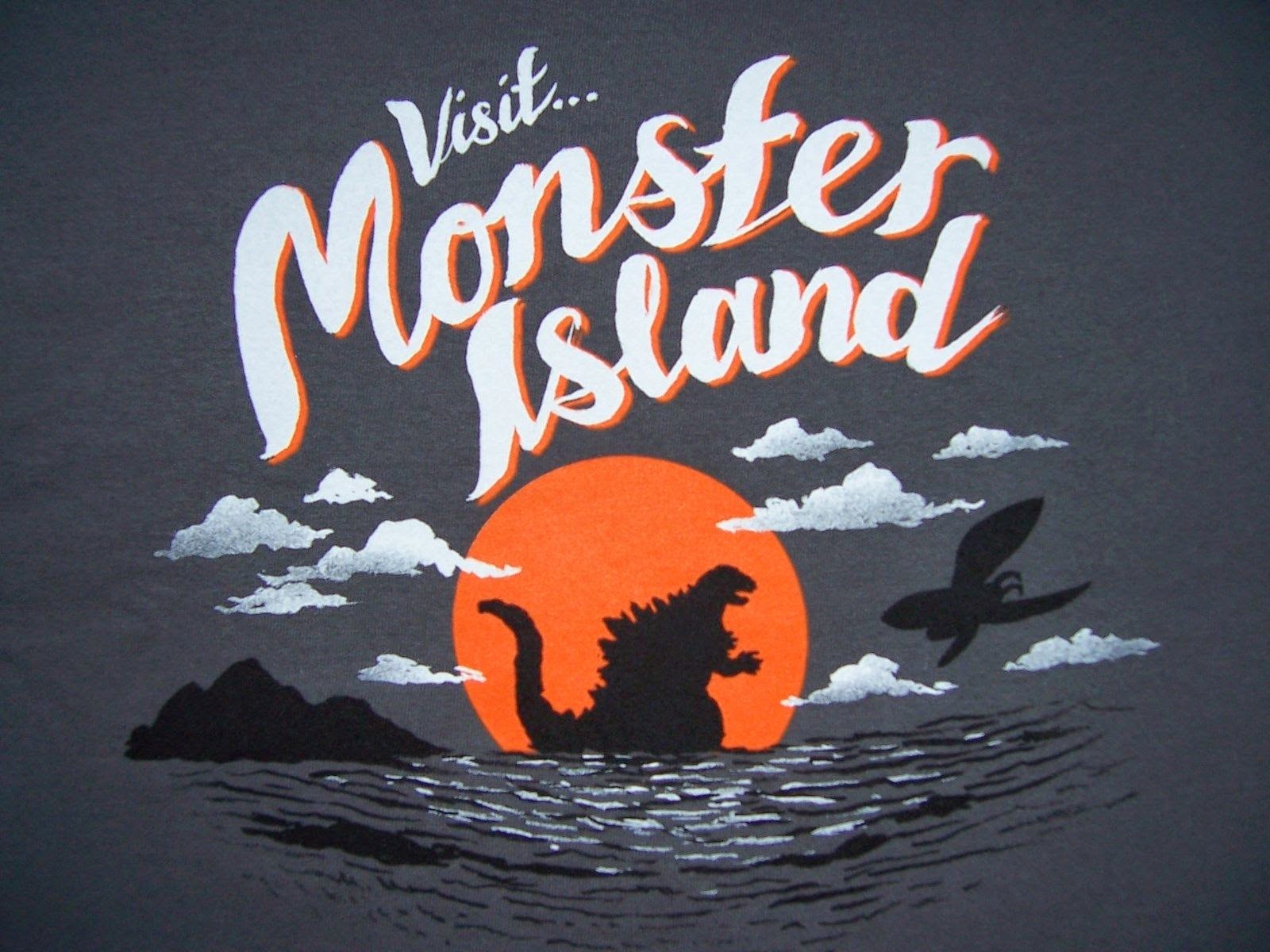 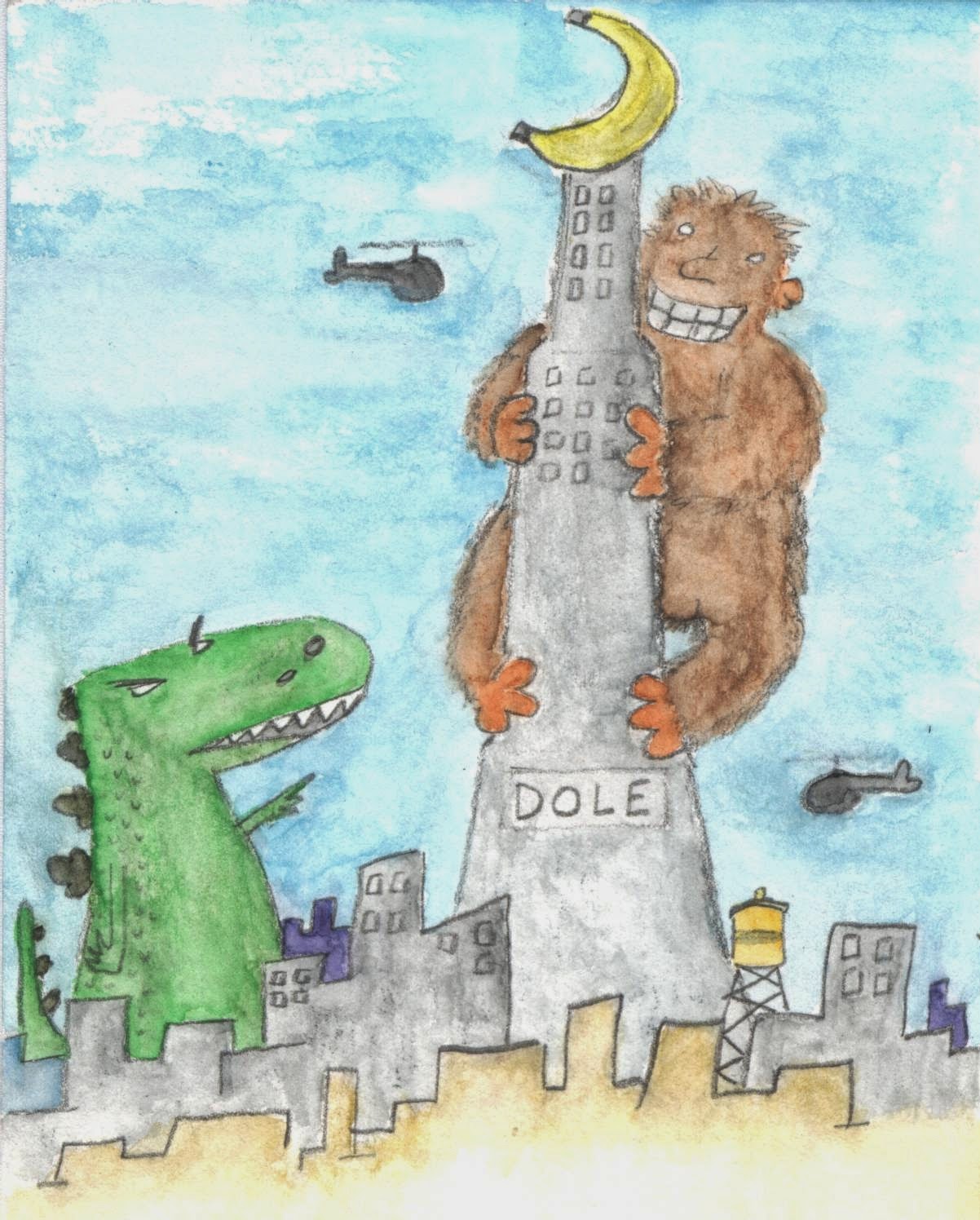 I was cleaning up some old posts on The Sphinx, and wanted to re-add this cartoon I did years ago.  I watercolored it, and ended up using it as the cover for one of my compilation discs. 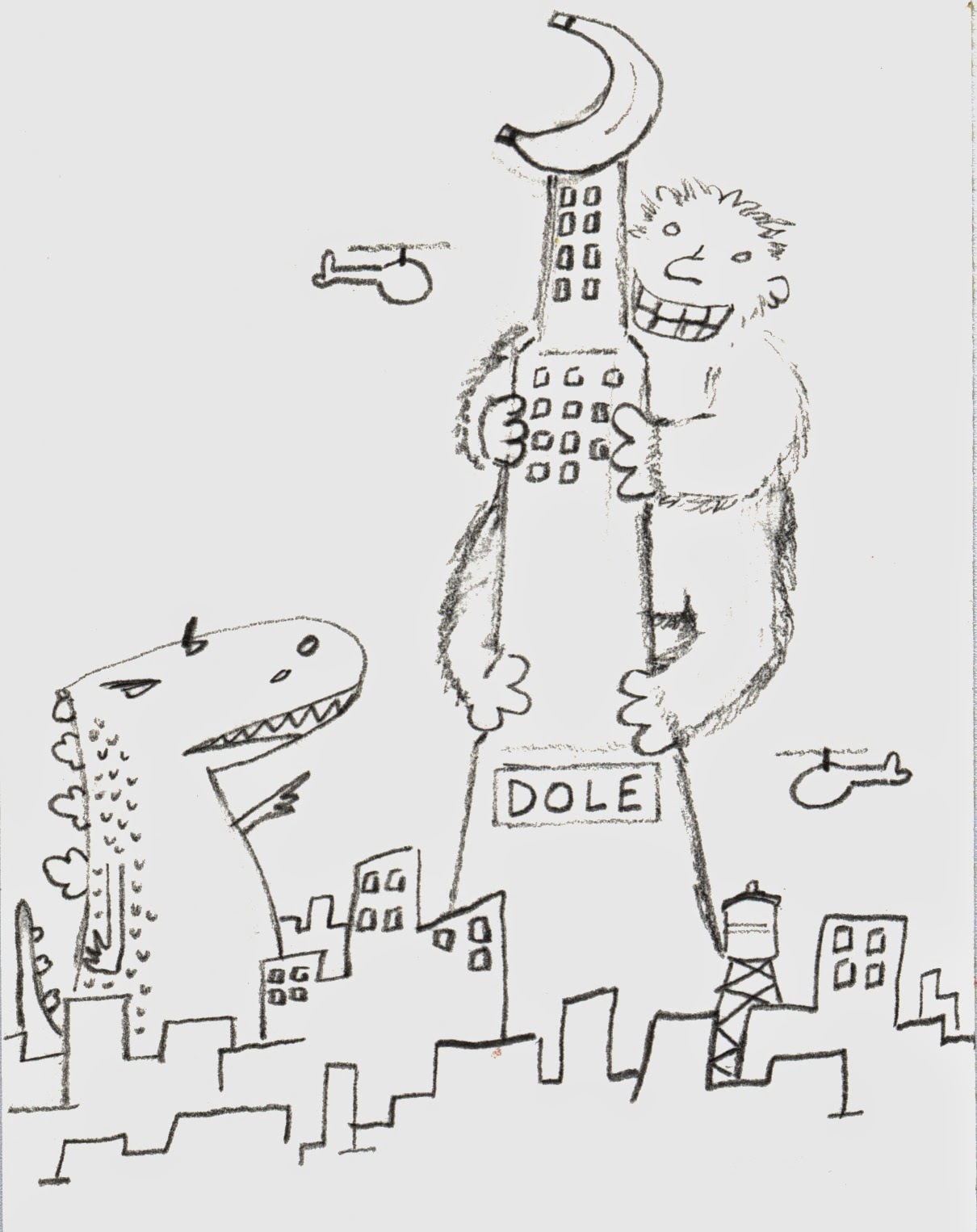 Posted by Sampoerna Quatrain at 08:01 No comments: 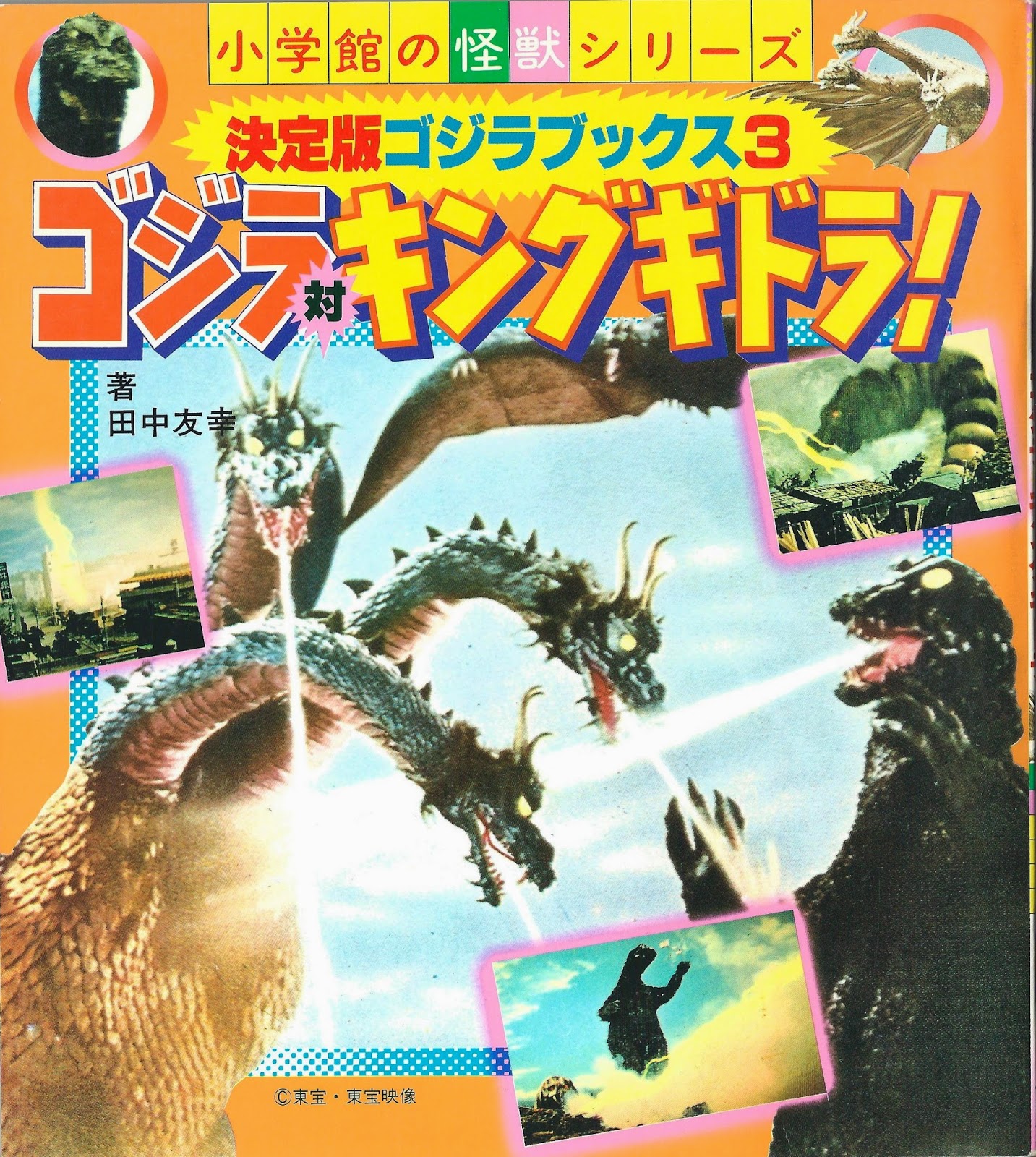 Fresh out of the mail, comes this amazing "Godzilla vs King Ghidorah" book from Japan.  Printed in 1984, it was the third volume of a series, as we shall see on the inside back cover.  It measures roughly 7.5 x 8.5 inches, is 40 pages, and is printed on sturdy, thick, glossy paper, stapled together like a magazine, and then glued into a thick cover.  Very well made, and a testament to this is that it's still pristine after 30 years.
Besides great photos from his movie appearances up to the time, there are three works of art in this book that were so amazing, I had to get them onto this blog somehow.  Luckily, I have one of those backwards, top-down scanners with a transparent glass lid, which made it easier to know I was pressing firmly enough to capture the image.  Stitching them together is never fun, but I think you will enjoy what you are about to see: 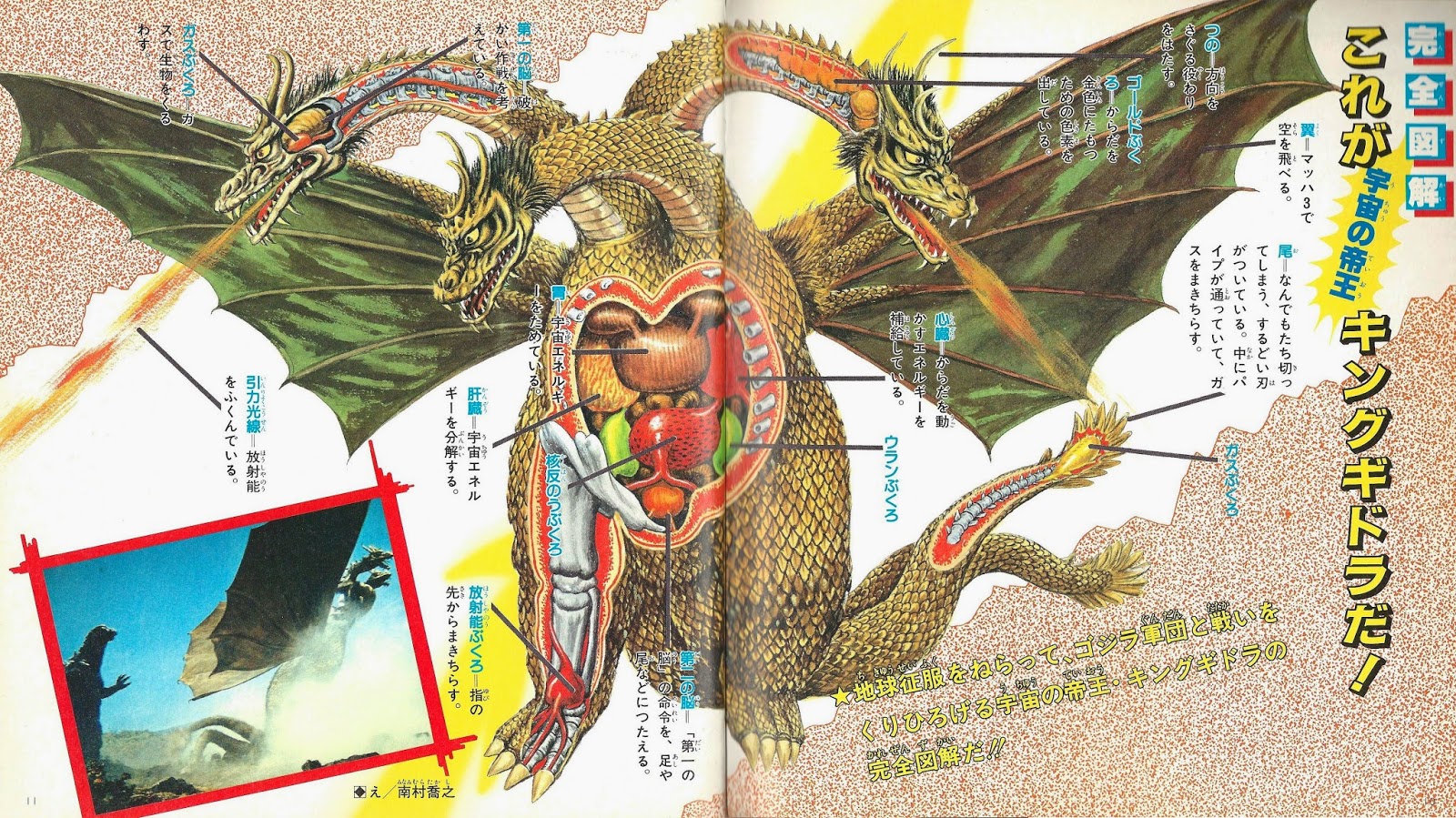 First up, a cutaway diagram of King Ghidorah anatomy! Pictures like this were a mainstay in Japanese kids' magazines and books since the 1960's.  The next time your school-age kid needs a science project, feel free to use this diagram.  And let me know what happens; the description of the look of frightened befuddlement on the teacher's face will be enough for me. 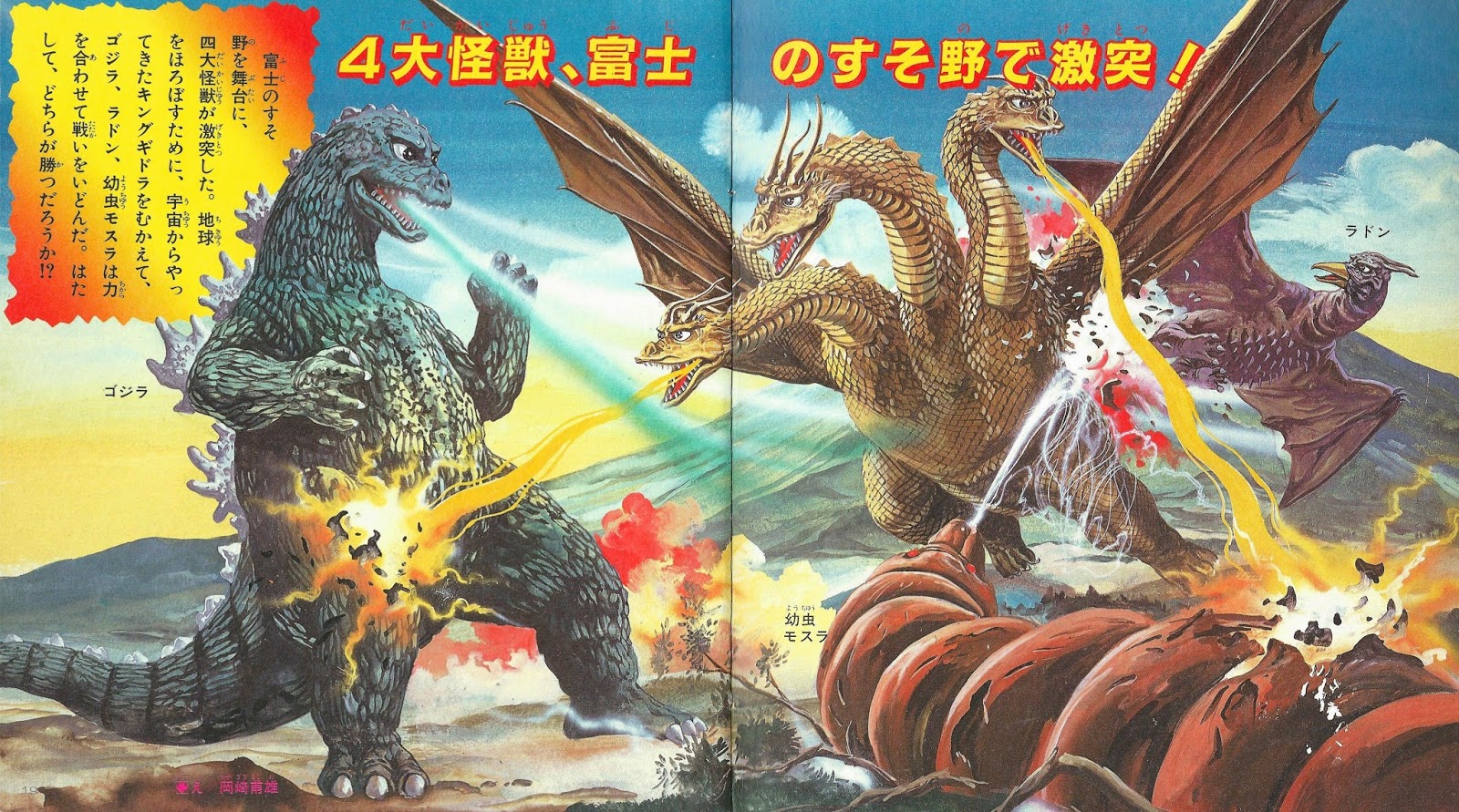 Next up is this gorgeous painting.  The battle described is from GHIDRAH THE THREE-HEADED MONSTER, which is one of my very favorites.  The one problem I have with this painting is that poor Mothra is experiencing a serious injury to its shell, and that really bugs me--which is weird, I know, especially upon noticing that Godzilla is taking a Ghidorah lightning-blast to the crotch...! 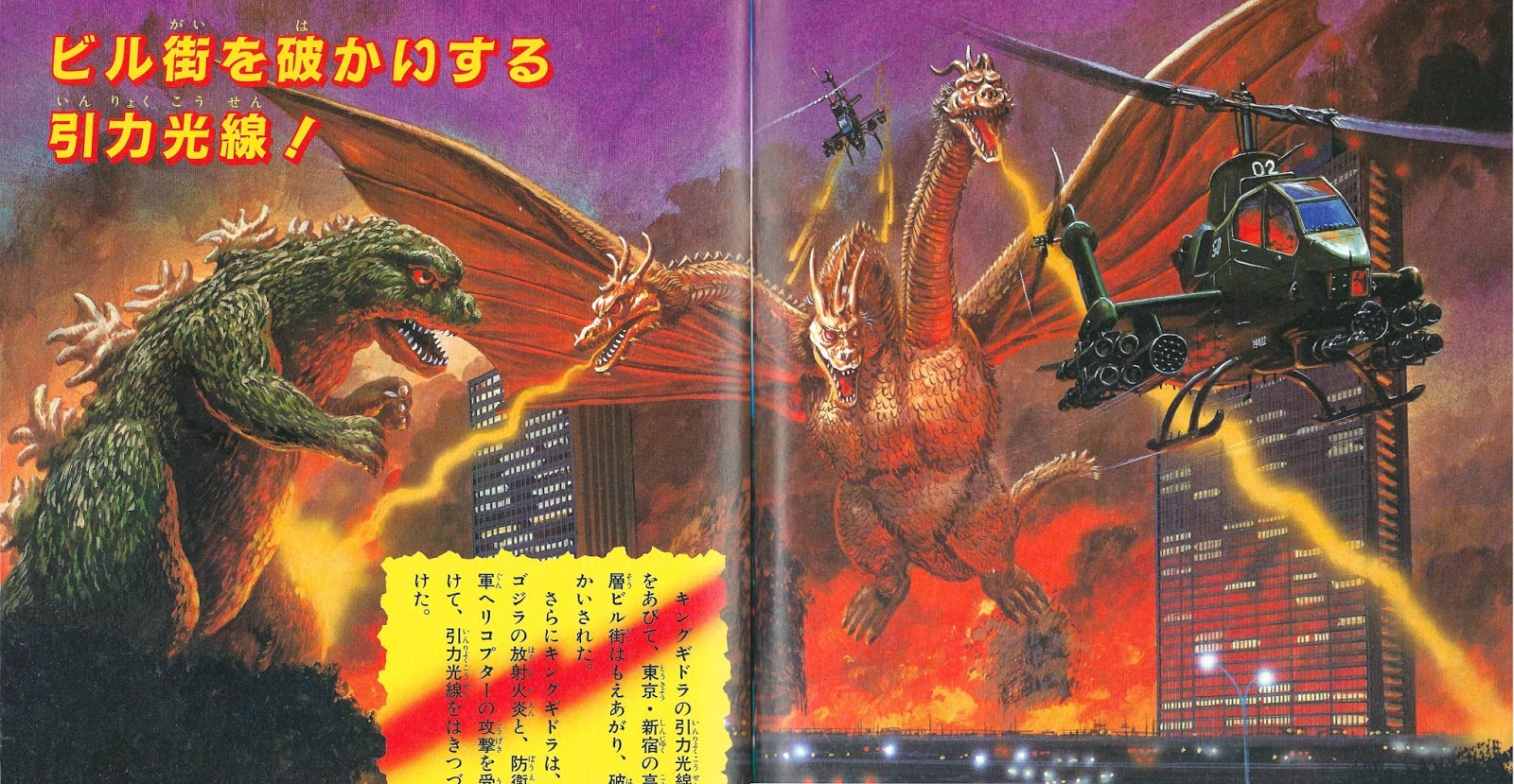 Another sweeeeet painting! I love Godzilla's red eyes here.  It's hard to say exactly if this is supposed to reference a specific movie, but I know what I like, and I like this painting.
The inside of the back cover, which at least gives us publication date, and shows us all five volumes in this series.  No doubt the word balloon over Godzilla's head is telling us to buy all five volumes.  Would if I could, Godzilla. 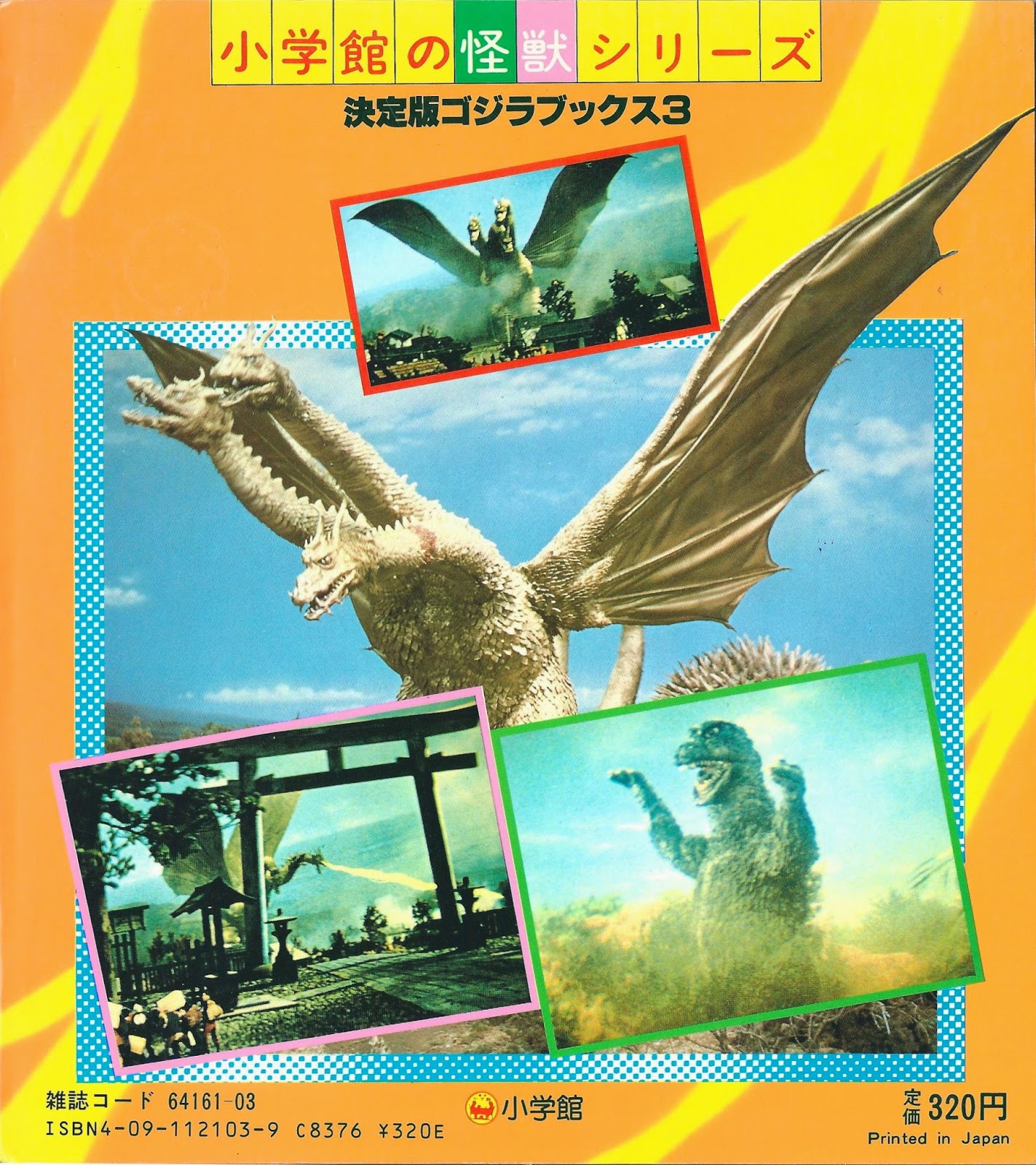 The glorious back cover of this glorious book!
Posted by Sampoerna Quatrain at 09:11 1 comment: 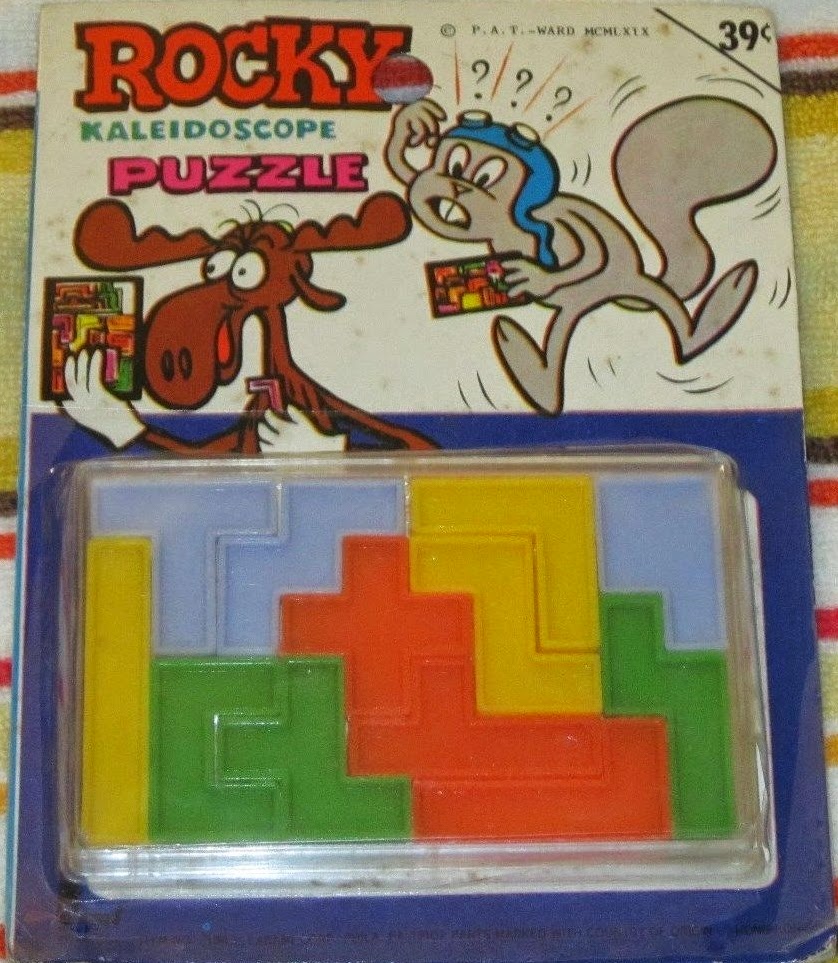 I am not only a sucker for vintage "Rack Toys," but also vintage Rocky & Bullwinkle stuff, and I just picked this up from Ebay last week.  The back of the card is unfortunately blank, but when I was examining the puzzle, I realized that the shapes looked familiar.  It turns out, they are identical to a larger, wooden version of this puzzle that I have, where the object is to build a 3-dimensional rectangle, SO, this puzzle had two different objectives, which is pretty cool...although, poor Rocky can't seem to figure it out!
Posted by Sampoerna Quatrain at 09:02 No comments:

Labels: American Toys, Jay Wardness, Vintage
Newer Posts Older Posts Home
Subscribe to: Posts (Atom)
Snake and Boris welcome you to a mysterious old tavern called The Sphinx. Here we will discuss many interesting things. You will notice many signs on the wall. One says, "A splendid time is guaranteed for all," and another, "An acorn is just another nut in a beret."