The short answer is: it's not magic. 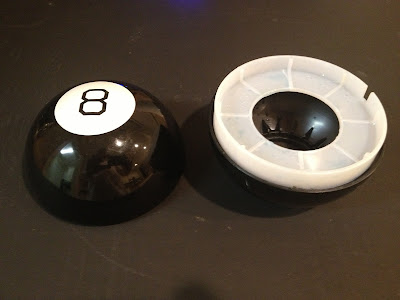 The long answer is, I've wondered for years what the little message die inside a Magic 8-Ball looked like.  I imagined it was solid and had eight or ten sides.  I was wrong on both counts.
Before we get to that, this toy is as secure as Fort Knox.  I mean, it has to be, because it's filled with blue goo, right? And who has ever heard of any pediatric misfortunes concerning the blue liquid? This is why:  you need something just short of one stick of dynamite to break into the thing.

I figured the easiest way to remove the die was to drill holes into the window, remove the window, and then just dump out the die...wrong again.  It turns out the die is nearly as big as the window itself, and the jagged holes I made as I worked my way around the circle only blocked my progress.  No worries, I just decided to dump out the liquid and continue my quest...

Here is where another of my many helpful warnings comes in: the liquid (which one website called "ink" and Wikipedia calls "alcohol with blue dye") finds a permanent home on skin...I didn't even realize it was running down both hands until I had dumped out most of the contents into the drain (don't tell the EPA please).  As a result, my hands were stained blue all weekend.  After soap, rubbing alcohol, mineral oil, acetone, Clearasil pads, and finally, soap again, on the second day, I got the majority of it off.

And it just kept coming.  Not only does it fill up the entire chamber in the middle of the 8-ball, but there seems to be an extra reservoir below the main chamber that contains even more. 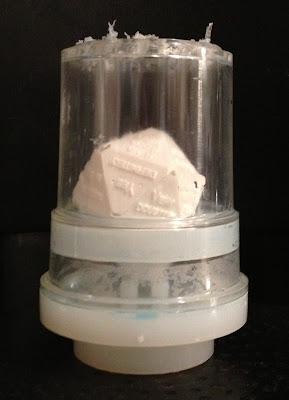 Well, I don't mind telling you, at this point I'm hot, tired--and now stained blue--and that's when I got really mad.  I took it outside in a large plastic shopping bag, and beat it with a hammer on the garage floor until it popped open with a sound something like a "38 special" (not the awful band) going off near my ear.  More blue dye leaked out, like it was in the final throes of death.

Now I have a cylindrical chamber, that used to be contained in the center of the indestructible toy.  I can see my quarry, and there are three Phillips-head screws on the plastic disc at the bottom of the chamber.  I run back inside, eager to remove the three screws.  At this point I figure there is probably a gold coin or, at the very least, a little plutonium in that chamber!

Unfortunately, these screws are apparently just a red herring, meant to frustrate anyone trying to actually dismantle the 8-ball, which I now suspect was designed by NASA or maybe even aliens.  The screws fell to the floor, and apparently served no purpose at all.

Somewhere, someone was laughing at me, and singing "Am I Blue" just to make it worse.

So, one more trip out into the garage, which is a lovely 145 degrees at this hour.  I retrieve the hammer with the blue fingerprints on it, and again beat the covered object, until the plastic shatters enough to remove my prize.  And, I hate to tell you after all of this, it's a little anticlimactic:


Yes, the die (for lack of a better name) is neither solid nor 10-sided.  In fact, it is an icosahedron...everyone say it with me, I-COS-A-HEDRON...very good! A TWENTY-sided monstrosity that is actually solid white, hollow and extremely lightweight like a ping-pong ball.  It's also made up of two 10-sided pieces that are loosely glued together...so much so that there are holes where the points meet the other side.  Somehow, this bugger is hollow, so I'll be hanged if I can figure out how it floats to the top.  It does explain why additional blue dye kept flooding out at weird times, though.

So now, it can be told.  Here are the twenty possible answers you can receive if you ask your 8-ball a question:


I was going to put "DEPOSIT 10 MORE CENTS, PLEASE" as a joke answer, until I realized there are no payphones anymore, and it would just make me look elderly.  The young folks will just have to look to Wikipedia to find out what a "payphone" is...was.  And speaking of Wikipedia, turns out all twenty of the messages are already in an article there, so, aside from my new keepsake, I completely wasted an entire Saturday afternoon.  Again.

But before I quit, did you notice that the overwhelming majority of Magic 8-Ball answers are negative or neutral? This is probably the greatest tip I can give you--if you plan to use one to determine your future, ask it questions about things you really don't want to do, like "Shall I mow the lawn now?" or "Should I stop abusing myself while looking at Internet photos of manatees?" or "Does talking to a billiard ball make me less than sane?"...well, I probably exaggerated, it's more like 50-50, so pay your money and take your chances.  Just don't break it open if you plan on going anywhere for a couple of days.
Posted by Sampoerna Quatrain at 12:25

Either way, thanks for destroying the mystique I had for this thing! I guess now I have to grow up!

Sorry for spoiling the mystery! But no, you do NOT have to grow up!

Before 1960 these things were made out of something much, much heavier than the plastic they use now. It might have been some kind of ceramic because it tended to break when dropped (which would have helped you tremedously in this case).
I wish I knew what material they'd used, but it's probably out there on the Internet somewhere.