And now for another article on the various Godzilla collectibles I have found over the years. I have several original, theatrical Godzilla movie posters framed throughout my house. Not only are they historical, very cool, and full of great art and graphics, but I love the thought that these actually were used in movie theaters across the US when these films were relea 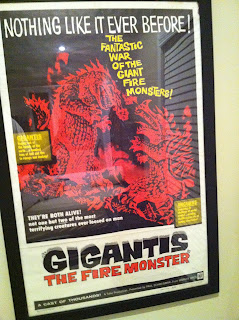 This 1959 poster for GIGANTIS, THE FIRE MONSTER is the oldest one I own. Sure, it's a far cry (and four years) from GODZILLA RAIDS AGAIN, but it's the only way we got the film in the United States. I love the red-on-black, almost woodcut imagery. Sure, they would be the best of friends later, but when they first met, Godzilla and Angilas went to the mat!

Another stark image, this time black-on-yellow, is this poster for 1964's GHIDRAH THE THREE-HEADED MONSTER. Ah, the first appearance of my very favorite Toho monster. At least, my favorite of Godzilla's foes. This is one of the all-time great Toho films, the best part being where Mothra convinces Godzilla and Rodan that they should work together to defeat Ghidrah. The defeat was so humiliating that Ghidrah had to change his name from the shame of it, although all he did was add a letter "O," as if no one would notice. 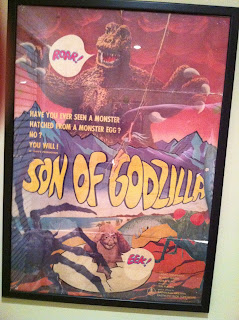 And then there was the summer of love in 1967, and the psychedellic, pop-art feel of the times was perfectly expressed in the poster for SON OF GODZILLA. ("Roar!") This one is really a conversation piece, and everyone that sees it can't help but really like it. Godzilla's hands are huge, and the jungle girl swinging on the vine is almost invisible because of the interesting layout--as you are looking at the poster, she just emerges all of the sudden. Movie posters as a rule are 27"x41", but this one was an inch or so bigger all the way around and had to be custom-framed.  This one is actually Toho's International poster for the film, as this film went straight to TV in the USA.

More sloppy photographs of great posters to come!
Posted by Sampoerna Quatrain at 13:01

I like the Gigantis poster. I love the Son of Godzilla one though. Look how cute little Godzuki is :)