How to Display Minifigures in a Built-In Shelf 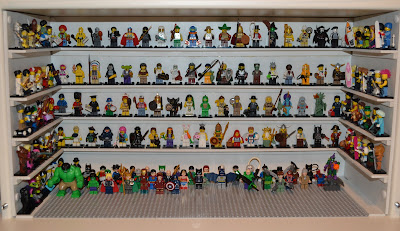 This is how I display my non-Star Wars minifigs, which mostly consist of the eight series of "Collectible Minifigs" that Lego has done, as well as super-hero themes.  I modified a shelf of a built-in bookcase (but of course you could do this with any type of bookcase or shelf).  The shelves are actually made out of yardsticks, which are exactly the right dimensions, and about 50 cents apiece.  The shelves are glued to panels (in the same manner as the shadowboxes), which makes it possible to remove them if I ever needed to.  I put down baseplate along the bottom of the built-in, which gives me room for expansion in the future.
Now, here's the coolest part--since it was a built-in shelf, I drilled holes at each of the four corners, and glued in threaded posts (actually these were bolts I cut the head off of with a hacksaw), which you can see sticking out in the picture.  From there, I cut a piece of plexiglass, and drilled holes in it.  Using some brass cap-style nuts, I have a removable window that keeps this collection dust-free, and it's a win-win situation.

Since this is one of the most-viewed posts on this blog, I thought it was appropriate to update it a little bit.  Of course we have had two more series of Collectible Minifigs since I first wrote this post, and my super-hero collection has grown quite a bit as well.  Mostly, though, I wanted to better show the solution I devised to hold the plexiglass over the front of the case.  As I said above, I bought hex-head bolts, sawed off the head, and mounted the threaded pieces at the corners, like so: 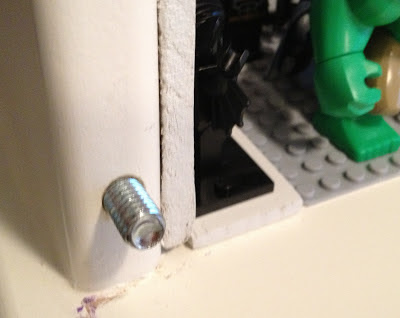 I drilled a hole slightly larger than the bolt, coated it in Gorilla Glue, and set the bolt into the hole. Below is a photo of the fancy brass cap-nuts that hold the plexiglass on: 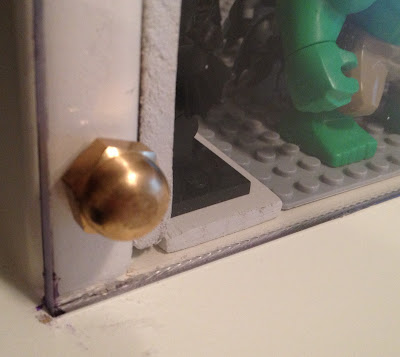 So far, this has been an excellent solution that isn't too difficult to remove, and really keeps the dust out.  Here's an updated photo of the collection; you can see that all the shelves are full, now that we are up to 160 Collectible Minifigs (and I refuse to count "Mr. Gold."  After all, Lego still gave us 16 in series 10 and kept him separate.)  Super-heroes have now moved to the front while the floor of the display begins to fill up!
Also, I don't think I did a great job explaining this, but the left, middle, and right sides of the display are separate pieces of spray-painted fiberboard that are attached to the built-in shelf with screws, and THEN the shelves are glued in--this way they can be 100% level as well as line up with their neighbors. As it turned out, the shelves held 151 minifigs.  Happy displaying!

If you missed the post on the shadowboxes I use for Star Wars minifigs, check it out!
Posted by Sampoerna Quatrain at 09:33

Epic! Wish I had all those minifigures. You're soooooo lucky!!

I would do anything to have those minifigures. I wish I could come round for a visit.

Looks good, thanks for sharing.

Very nice display. Love the idea for plexiglass cover. clever way to attach it with the bolt. I love that the box is very deep allowing space for more figures or builds or larger figures such as the Hulk at the moment I use small shadowboxes (bought) and unfortunately they open in the back. Thanks for sharing the details and updating the post.

Very nice, I'm looking to do something similar. I might have to copy your design.

Please do! I need to update my photos; with the 20 LEGO BATMAN MOVIE figures, I just moved to the upper level. Not counting Mr. Gold (or Simpsons or D*sney, there are 293 Collectible Minifigs released in the USA so far!