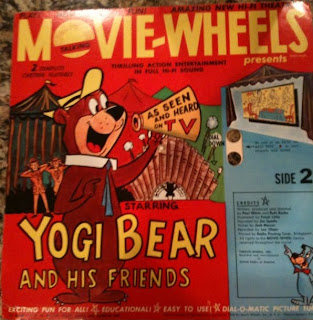 Here's a really interesting thrift-store find I shelled out seven bucks for this week, and it's something I never knew existed. This is a product called "Movie-Wheels" that is a book-and-record set with the book built in. Actually, there's a wheel built into the cover that the user is cued to turn during the story, and a window allows for a slide-show of about 16 or so pictures to be viewed as you listen! The process is then repeated on side two, for both the record as well as the illustrations! This was a very clever item, and apparently there were others: a Felix the Cat one was recently spotted on Ebay.
Another thing that fascinated me about this item were the credits. Who would you expect to see listed doing the voices? Daws Butler, maybe? Try Jack Mercer of Popeye fame...yep, you heard me right. Mercer does his best here with what he's given, but to my ear just doesn't pull it off. But then again, could Butler voice Popeye, really? Well, maybe he could've, come to think of it...
Yet another interesting part of this are the 1960-style superlatives that the cover is littered with: "PLAY! HEAR! SEE! FUN! AMAZING NEW HI-FI THEATRE! THRILLING ACTION ENTERTAINMENT IN FULL HI-FI SOUND!" I don't know how thrilling hi-fi sound should have been at the time, but Ben-Hur this isn't. In fact, I found the recording to be tinny and filtery, and this was long before I de-clicked it, in case you're wondering. Also, it's a bit sloppy around the edges. Lest you think I was a bit abrupt at the controls, the ending music really does cut off like that on the actual record!
Not only does the cover boast "AS SEEN AND HEARD ON TV" (Imagine Billy Mays hawking this one circa 1960), but also--and this is important for Junior's educational upbringing--"AUTHENTIC SOUNDS of Count-Down, Missle [sic] Launching Satellite in Outer Space, Courtesy of UNITED STATES AIR FORCE"...Don't worry, that phrase makes no more sense to me, either, and it's a blink-and-you'll-miss-it moment to be sure...but it still warranted a plug on the cover!
Lastly, the detailed instructions (for dull, Cold War-era, unsophisticated kids) state that "This MOVIE-WHEEL contains a non-toxic, unbreakable Hi-Fi miniature LP record!" In layman's terms, sans hyperbole, we call this a "flexi-disc," and that's all it is. This is something like referring to an ice cube as a "scientifically modified refrigerated hydroxide cuboid," but you can't fool kids so easily today, now can you? 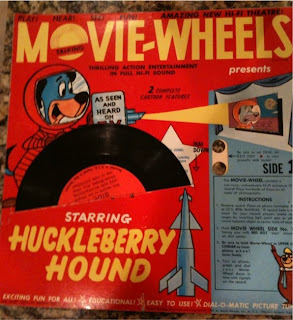 Posted by Sampoerna Quatrain at 20:19

Hi, Sphinx(?). Nice Blog - Lot's of 'interesting' stuff. Since some of your earlier posts had CBRs of the booklets I wondered why this one didn't... Then I realised that would mean scanning each page repeatedly for each position of the wheel! Anyway, thought I should let you know some of your earlier posts no longer have valid links... Namely: Die, Kaiju, The Early Duke Ellington, Star Wars Breakbeats, ZEP CLASSICS & Hey, Mr. Spaceman II. Also, NOT the Beatles! appears to be corrupted (and yes, I did try DLing it several times. Any chance of re-posts?
Well, thanks for listening (erm, reading!) Later, dude!

by the way, if you need to find Unique Fonts, you can visit our website.

I've had lots of requests over the last few years to re-upload some historical projects that I've posted here, and I thought the tim... 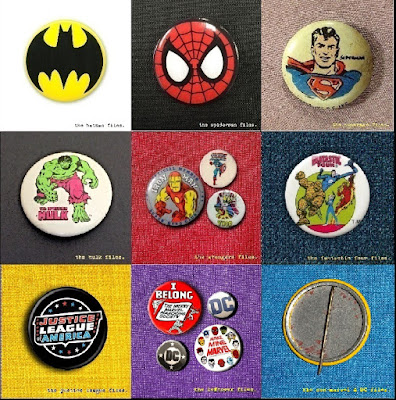