I have a real treat for you today.  Here is a set of model sheets from that seminal classic of my youth, CHALLENGE OF THE SUPERFRIENDS.  If I had to list the animated series that defined my childhood, the many incarnations of Superfriends would rank just under BATTLE OF THE PLANETS.  The Hanna-Barbera version of the Justice League of America dominated Saturday mornings (and afternoon syndication) for 12 straight years, and most of the 214 adventures are available on DVD....but not all! (Do you hear us, Warner Brothers??? Economy be damned; give us our Superfriends!)


Anyhow, these are pretty much solid awesome.  You will notice that some are from the first group of model sheets for the original series, and re-titled for this specific production (after all, the original Alex Toth designs continued to be used).  But that doesn't mean you won't get to see some really unusual items, such as the dashboard of the Batmobile, Clark Kent, and lots of things that were new for 1978, including Legion of Doom members! 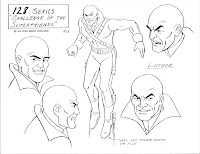 Here's an interesting Factoid:  I read an interview yesterday with  Darrell McNeil, who was a young animator at HB, and he said the original concept for the team of villains was to be called "The League of Evil" and include Dr. Sivana (as Captain Marvel was to be included in the Superfriends at that time), The Joker, The Penguin, Mr. Freeze, and Catwoman! You can read the interview, and many more, comprising an entire "history of the Superfriends" at this amazing blog I discovered, called Noblemania, at http://noblemania.blogspot.com/.

Posted by Sampoerna Quatrain at 08:38