Here is an item that is as monstrously rare as it is huge.  I have mentioned the infamous "Godzilla vs. Tricephalon" playset made by HG Toys in 1978, and they also produced three regular-sized 150-piece puzzles that year with original art (see previous posts, but here they are anyway):

For their fourth and last, they utilized the artwork made for the box of the Tricephalon playset, and went all-out.  When complete, this puzzle is 36" x 14 1/2"! I suspect that the larger size made it a bit more expensive than the regular-sized puzzles, which must contribute to it's rare-ness.

I know I often use words like "beautiful" to describe Godzilla items, but when completed, this puzzle is simply a beautiful thing to behold! It's the only one of the four to show crowd reaction, and the entire section, about 3/4 of the way down, is made up of horrified onlookers!
Here's where a sort of odd problem occurs, though...Tricephalon is obviously a beast created by HG Toys, and, also obviously, it has three heads [TRI meaning three, and....well, you get it]:
Inexplicably, though....there are four heads wreaking destruction in the artwork.  Oh, I'll wait while you count them.....yep, told you there were four.  The only thing I can come up with is (besides extreme artistic license) that it's actually a montage, for lack of a better word.  Why else would the ENTIRE CROWD be facing away from the action? If Godzilla was standing behind you, partially destroying a robotic three-headed monster, would you face the opposite direction? Actually, if you think about it, they would have been facing a BRICK WALL if we are to really take the artwork literally.   It's a little unfortunate that the trunk of the neck of the leftmost head (now THERE'S a sentence that would have given one of my English professors a coronary) looks as if it directly connects to the bonus fourth head bursting through the ground.  It's just one of those little things that bug me. I tend to think about these things all day.


I should also point out that, while our three-headed friend is obviously based on King Ghidorah, it's interesting to me that he ALSO sort of predicts Mecha King-Ghidorah...I think there's something to that!

After years of searching, I finally acquired the mighty Tricephalon playset.  I have a two-part review of it here and here if you want to read all about it!

4-25-13 UPDATE:   In the comments below, you will see that Greg Johnson kindly shared with me a photo of a salesman's sample, a mock-up of this puzzle that he owns! Compare this photo with the finished artwork; it's very interesting!! I would like to know more about this--the mystery deepens! 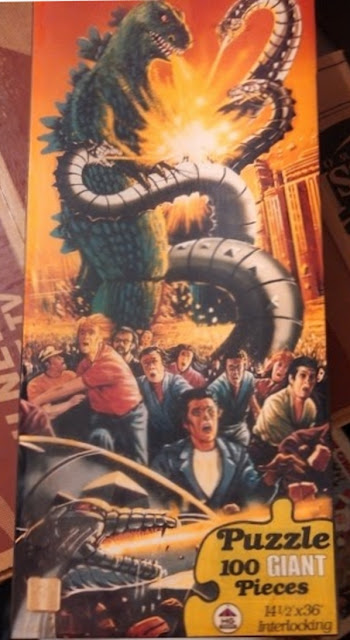 Posted by Sampoerna Quatrain at 07:53

I have a salesman hand sample of the fourth puzzle. This is the first info I've found on it. The basic scene is the same as the final product but the sample features a more traditional looking Godzilla and the terrified crowd is made up of different characters.

Thanks so much for the comment and the photo--I'll add it to this post, because this is the sort of thing that just ISN'T out there on the Internet! I'd be fascinated to know how you acquired the sample puzzle!

I bought this back in the early 90's at a 5&10 store that was going out of business. The owner brought tons of stuff out of the basement that had been accumulating for years. As you can imagine, this was a collectors dream!! Sadly, the owner told me that someone had just bought all of her Star Wars toys from the basement. I believe she describe it as "a barrel full" :(
This hand sample is apparently a box with the graphics panels glued on as a mock up. It has type written labels stating that the content doesn't match the box. It is still in shrink wrap so who knows what the actual puzzle is.

I have very recently acquired a puzzle that is the Godzilla 100 giant piece jigsaw puzzle No.468 from an estate.It looks exactly like the picture you have at the top of this page. We can find no other information about this other than your blog. Do you think you may be able to help us to find more information about this puzzle?

I wish I could give you more information than what I put in this post, but that's all I know, other than at the time I bought it, I paid $100 for it...now that the American Godzilla movie has come and gone, prices may have fluctuated, but I CAN tell you that "Godzilla puzzle" is one of my saved searches on Ebay, and I don't believe another one has come up since! So, you may want to list it! Hope that helps!

Thanks that helps I appreciate your time!