Engrish of the Week: The "Airsoft Sport Gun" Instructions

All of us have been in a flea market, thrift store, or back alley at some point in our lives and seen these types of things...you know, the cheap, loosely-shrinkwrapped, bootleg items from Asia that try to pass as popular products, only for a fraction of the price.  They are designed to catch us at our lowest point, and fork over our rapidly-devaluing American currency.
Well, recently, at one of those places mentioned above, I broke down and bought what I hoped was a fun toy, for the price of five bucks.  The cheaply-screen-printed box, which I should have photographed, said it was an "Army Airsoft Pistol," and nothing could have been farther from the truth.  If I hadn't have thrown it into the trash angrily, I would have taken a picture of it.  It looked something very close to this:
The problems were legion. First of all, the grip of the pistol was about an inch and a half, which should have been obvious to me.  So it's hardly a "pistol." As if this didn't render it useless enough, there is no "Air" involved in this "Airsoft," rather, you pull back the top portion of the gun to set the tension on a spring...this is roughly equivalent to the spring inside of ballpoint "click" pens...McGuyver could have made a better gun out of one of those pens.  It included a few dozen hard plastic orange pellets, which were bigger than standard BB's...I completely forgot to mention there is no way to LOAD the thing, other than roll one of the orange pellets into the barrel of the cocked weapon...just like real guns, right? You know how you have to cram bullets down the...no, you don't. Because nobody does that. Anywhere.
So now, you have a loaded "weapon" that is ready to shoot...as long as you hold the barrel perpendicular to the ceiling, because if you don't, your "ammunition" (which may or may not be fruity candy) will fall out.  Look out, Neighborhood War Games, because you are one dangerous mother at this point.
Actually, not really.  Pulling the trigger will indeed launch the beanbag filler, but not very well, and not very straight...part of the problem probably has something to do with a handle that is not long enough for the average human who is above the age of six months.  And the strength required to actually "cock" the thing is somewhere in the area of Circus Strong Man, so we are left with an interesting paradox.
Enter trash can.  So why am I telling you all of this? Because my five dollars turned out to be well-spent after all, because the "Instructions" were a veritable cornucopia of mangled-Engrish entertainment! Let's take it one piece at a delightful time:

First off, is "Airsoft" a sport? Do people congregate in fields and shoot each other with BB guns, like the kid in school your mom would never let you play with? Is this a thing?
As if you don't know what you have just purchased, the opening sentence tells you. "This product is an airsoft airgun."  Do you know any "pers on(S)age eighteen(18)"? If you don't, you at least need some ADUIT or PERENTAL help.  Also, make sure you call your local police station and ask what their REGLULATIONS may be...they love taking those sort of calls.  They really do.
Lastly, we are advised to read the manual, which is one side of one sheet of paper.  I would have said, "since you are reading this, we can move on now."

Make sure you go to the sporting goods store and buy a $50 padded gun case for your $5 toy if you are going to carry this in public.  (Really this is so no one will laugh at you.)
Also, enjoy it in your "handling training," whatever that may be, or "movie and theatrical production application," which is basically just stringing English words together randomly: "Enjoy in your Methodist swordfish arousal activity."
Oh, and make sure you ask your "airsoft dealer" where the local shooting range is..."Excuse me, 400-pound cat lady with scabies, who sells outlet-mall crap that fell off a truck in front of her house and now has a booth at the flea market, can you direct me to the nearest Gentlemen's Gun Club?"
Lastly, to store it, unload it (just point it at the floor, your one bullet will fall out), remove the batteries and gas that it doesn't even have, and lock it in a $2000 gun safe. NOW you can go into the Federal Building. 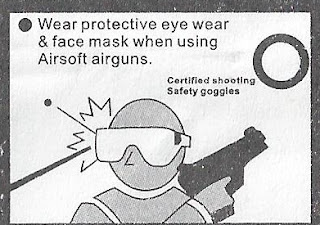 The lower half of the sheet is a huge grid of nine illustrations.  If it is a "good" thing, then the square is marked with a huge "O," which of course is the International Symbol for Stuff You Are Allowed To Do.  If it's "bad," then you get a huge "X." The safety elements are wasted on me, because all I can think of at this point is Hollywood Squares. You'll see at the end, when it's all together.
This first warning says that you are to wear giant, Yoko Ono sunglasses every day of your life, because somebody just MAY be randomly shooting you in the eye.  My problem is, what have you accomplished if they shoot an inch lower? Nevermind, because it's a big "O" for this square.

Now things get serious...it's important to remember: never, never, NEVER barndish (or fier) your toy gun at anyone...mostly because your "bullet" won't travel at the distance shown, and you will be laughed at.  Notice how the guy's pistol has suddenly become an uzi at this point. "X" !
Also, if you do, handcuffs will fly out of a car tire and land on your wrist, but don't worry, one half of them will be closed.  Also a huge "X" ! (Imagine the Family Feud buzzer at this point.) 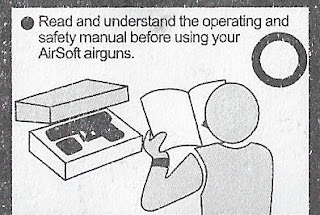 Make sure you READ THE VERY PIECE OF PAPER YOU ARE HOLDING AND READING AT THE MOMENT YOU ARE READING THIS.  Now they tell us! I also notice that the one the guy has is totally blank, and I can't help but think that he is getting better information.  "O"! (By the way, you can keep track of our hero here, because he has a nose.) 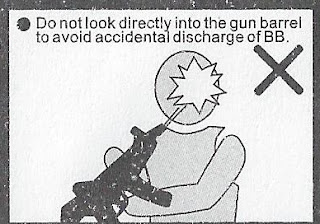 Great. Somebody didn't read the manual! Oh, and his gun has turned into an AK-47 suddenly. BUZZ! "X"! 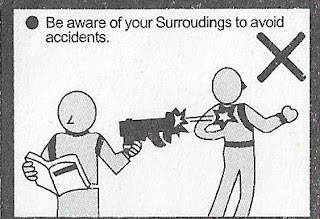 So NOW he decides to read the manual, and he murders his neighbor, who has a coffee mug for a body, one-handed with an assault rifle that shoots plastic balls.  It could happen. "X"! 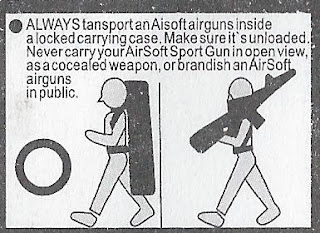 I swear this guy is going to have a Howitzer by the next panel. This whole paragraph is a clustertard of Engrish delights.  It's main tenet is an eternal truism, though: if you are going to tansport it, make sure it's not cocealed.  That says it all. Circle gets the square! 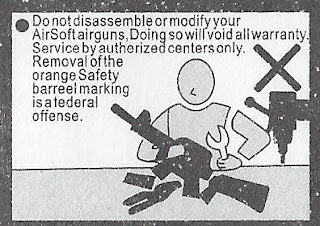 We've all had these days...you are in the prison workshop, taking apart your assault rifle with a barbecuing tool, and what happens? Well, mister, you have just voided the warranty you didn't have! That's right. Didn't you know you are supposed to go to an autherized center only? Nevermind that you didn't feel like driving to Malaysia for the day...you tried to remove the orange Safety barreel, and that is marking a tederal offense! Good thing you are already in jail! "X"! 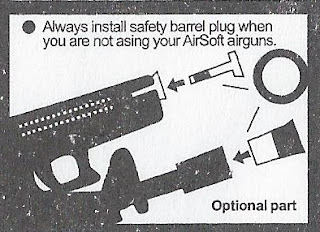 And lastly, PLEASE install the safety plug that the gun didn't come with...what? Oh, nevermind that other thing, it's just an Optional part anyway. We don't know how it got into the diagram.  Whatever it is. "O"!

As you can see, it turned out to be the best five bucks I've spent in a long, long time.  Here is the completed "manual," for your further enjoyment: 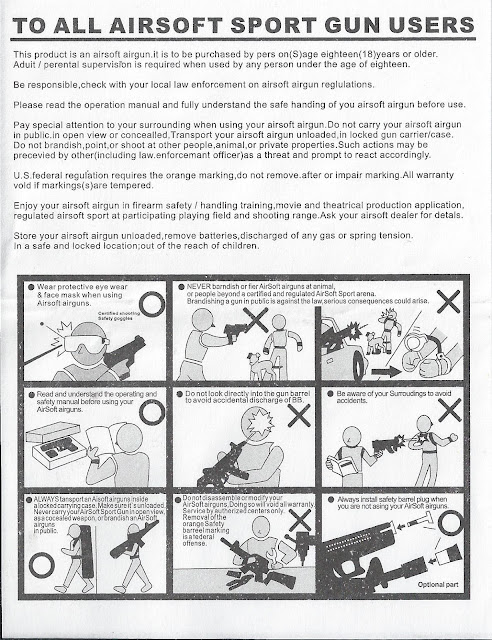 Also please note that "X" won the game with a vertical Tic-Tac-Toe down the middle of the board.  They went home with a stereo set, the 18" color TV, and the Hawaiian vacation, but it had a sad ending.  They forgot to wear their Yoko Ono glasses, if you know what I mean...!
Posted by Sampoerna Quatrain at 08:57

Probably why I feel glad for not having a job right now to blow money on that!

Which one was Jim J Bulloch?

By the way, I picked up a decent set of "Jarts" for a buck at a garage sale last year!

Ah lawn darts! The most lethal children's toy ever invented! Those were the days!

Well, I'm to have a complete set along with it's original box!

It's a great news. I love this site.

I have enjoyed reading your post. It is well written. It looks like you spend a large amount of time and effort on your blog. I appreciate your effort. Please check out my site.I
Toy guns for sale