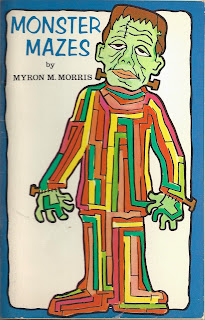 We all remember these types of books; they were everywhere in our youths.  We had Scholastic Book Orders (which are still around), Weekly Reader, and all sorts of clubs and places to get them.  In the 1970's, activity-based books were huge.  Not just coloring books, but connect-the-dots and maze books had also hit a huge stride.  I recently picked up a super-clean and unused copy of MONSTER MAZES, by Myron M. Morris, published by Watermill Press in 1979.  There's no price printed anywhere, and the back cover is completely blank, so it makes me think it was made for some such book club or give-away scenario. 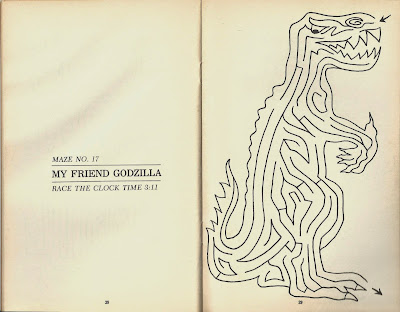 Inside are 23 mazes, which include things like "Sea Serpent," "Tin Man" (for a hulking robot), "Fire-Breathing Monster," and other mostly very generic names (except for "Frankenstein's Monster," so points for naming him correctly).  And then you get to Maze #17.  Is it "Terrible Lizard" or "Giant Reptile Attack"? No, it's "My Friend Godzilla," which of course includes no ownership information or acknowledgement.  And ironically, it doesn't look THAT much like Godzilla, and they really COULD have gone the generic route, as if it were a Super Friends episode.


My point is, very often, a mummy can be generic, and not be "THE" Mummy, but it's pretty normal, especially in the 70's and 80's, to see Godzilla just be called Godzilla...after all, the more astute writers understood he's not just a dinosaur, he's Godzilla, after all!  You see this quite a bit, and I've talked about it here in this blog...one instance that comes to mind was the extremely enjoyable kids' novel I reviewed here, (where Godzilla was a CHARACTER for goodness sake), as well as the occasional Far Side cartoon.  I've seen it elsewhere in the titles of kid books, and I'm sure you have too:

I see these books in my wanderings, and even I don't buy them...but why am I rambling on about all this?  Merely to say that Godzilla is ingrained into our culture, which happened over a long period of time.  Because of this, some people think of him as a generic "thing," to insert into their works, as if they were putting in the Statue of Liberty or Abraham Lincoln, when in reality, there are rights issues involved. (Just ask the day-care owners who decided to paint murals of D*sney characters on their windows and walls.) I'm just marveling at that phenomenon.


You may know that right now, a lawsuit has been filed because of a new film that is trying to use Godzilla as a character in the story, and Toho has pounced upon it, and good for them! Of course, I seriously doubt that the filmmaker's intentions are as innocent as the above examples...

...but back to our fun Friday activity:  enjoy the maze.  You have three minutes and eleven seconds!
Posted by Sampoerna Quatrain at 07:19