Have you ever run across something from your childhood that you totally missed? Something that you completely were unaware of its existence? Something that you SHOULD have known about, but somehow had no idea of? Well, over the years, I have read so much about this book, piecing together clues about it here and there...which have become legion in recent years...that I knew I had to own it.  You probably know something about it too, for the preliminary reason that I did:  the Lex Luthor "40 cakes" phenomenon.  This image has been circulated around and used in many a meme. 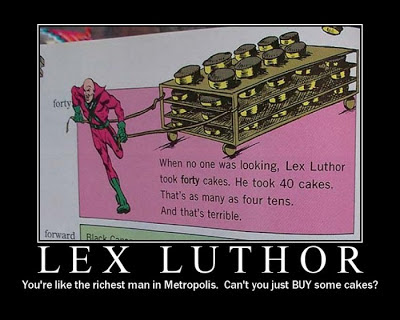 The truth is, there's an entire 400+-page tome full of that stuff, and it's called THE SUPER DICTIONARY.  Have you ever sat down and just READ a dictionary? No?! Well, I hadn't either...until now.
I end up talking about the 1970's way too often in this blog, and I am going to limit it to one sentence here.  In short, the generation in the 1960's who were old enough to become figures of authority in the 1970's had some unusual ideas about learning.  I think that about explains all of the chroma-key and surreal weirdness of educational children's shows during that period.


I honestly have a theory in the back of my mind that the stately group of wordsmiths and Education PhD's listed at the front of the book were bombed out of their minds the entire time they were putting this together, and probably cracking each other up as they went along.


And believe me, it's on every page.  Even a simple entry such as "camera" can take a turn into Strangeville before you even see it coming:
Instead of DEFINING the words, like a normal dictionary, this book takes the approach of "if we use the word in a sentence, it will become obvious to the child what that word means.  If we use it several times, they will definitely no longer be confused."  (Of course, if you are five years old, and you are having to look up the word arm, you already had a MAJOR problem that no book could help.)  It leads to some hilarious double-speak, that at times sounds like the mumblings of a drunken mental patient.  Words are used, reused, and, sometimes, re-reused in the same balloon.  If the word is a homonym, it can even be used once again, all WITHOUT PRONUNCIATIONS, mind you, also a crucial part of a normal dictionary.  "Where did you lead me?  Where are you leading me? I have many leads to follow on my story.  This pipe is made of lead."  That sort of thing.  [Footnote:  it should be noted that Craig McCracken has said that this book was an inspiration for the speech patterns of Mojo Jojo in THE POWERPUFF GIRLS!]

Let's jump in.  At the beginning of the book, there is a glossary of all the Super Heroes that will star in the dictionary.  The usual suspects are here:  Batman, Robin, Superman, Wonder Woman, etc., and some villains, like Lex Luthor, The Joker, and The Penguin.  Aquaman and Lois Lane are also present, to fill out the requirements for complete idiots (you shall see, dear reader).  Also, there are a few "randoms" that it looks like were invented for the book, and some very dubious "heroes" of other races.  For example, a black version of Zatanna they created on the spot for the dictionary, named "Conjura."

Also, there is a Spanish guy in a garish costume called "El Dragon," as in "El Dra-GOAN"...wait, didn't we already have ridiculous two-dimensional stereotypical heroes of other races, created for the Super Friends?  Black Vulcan? Samurai? Apache Chief? (By the way, in the Native American category, we get Firehair, a lame character...but they are quick to point out in his bio that he is NOT AN INDIAN.) FAIL.

I did some research on this next one, to make sure she was made up for the book:

Turns out, she was, although I don't know why.  Perhaps to make the other purple-haired kids from space feel okay about themselves?

Did you know that Catwoman loves cats very much? Did you know that? Seriously, this is insulting, even to the dumbest kid in the class.  "And she loves to do bad things."  Like dressing as some sort of Three Muskateers-themed hooker.

As we have already seen, Lex Luthor is terrible.  Also, the phrase "shoot people with his rockets" is so randomly-inserted, it's almost a non-sequitur.

And now, a note on the art...most of the illustrations were cribbed from various DC back-issues, and look as though they were traced by the hired help.  Supergirl's costume changes....as fast as it did in the comics, actually.
Today, we begin in the A's. 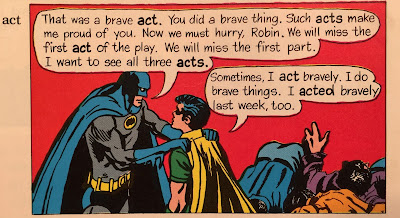 Batman and Robin are having a moment...did you notice the mangled pile of bodies behind them?  Is Robin Wolverine, suddenly?  Is that guy missing fingers?? 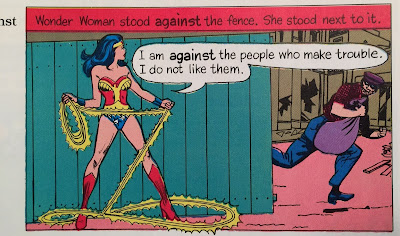 She is also completely lassoing her own feet.  And....the generic crook gets away.

Will Atom ask the bee to the prom?  Atom has quite an ongoing relationship with bees in this book.

I need some context for this picture...is Superman shrunk to a tiny size?  Is he cleaning the Justice League fountain? How does one "win" over algae? And, how does "little water plants" even get the meaning of algae across to children?!??

Oh, okay, I see.  Animals only have two characteristics:  they are living, and they are not a plant.  So far, I have learned that Krypto is not algae.  Let's move on, to a bit of nightmare fuel! 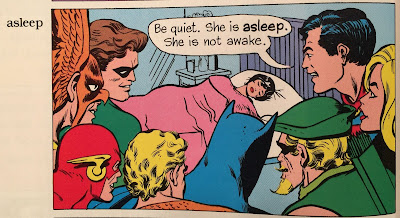 My goodness; that's not creepy at all, now is it? Is there any context that makes this picture less than truly frightening?
TO BE CONTINUED...
Posted by Sampoerna Quatrain at 13:07