Godzilla (and more) Bromides! Part One

Today, some interesting cards that are more than just trading cards--they are "bromides."  If this term is new to you, they are colorful Japanese cards, many times single-sided, 3 inches by 5 inches, that it's pretty tough to find any information about in English.  They were apparently printed through the 1970's, are often hand-colored (which provides a gorgeous, artistic effect like early lobby cards), and for Godzilla, there are at least just over 200 different ones.  We know this, because there is a boxed set of reprinted cards made a few years back that includes that many.

It's always been my gut feeling that these little masterpieces were meant to be small pin-ups.  I say "many times" single-sided, because every now and then, you will see one with blue printing on its back.  This is perhaps similar to the occasional "Lucky Card" (which was redeemable for stuff) that could be found with their tinier cousins, the trading cards made by Yamakatsu.  It's also pretty common to find cards with pencil writing on their backs, as these were treasured by kids of Japan.

So now that you know all that I do, let's look at some! 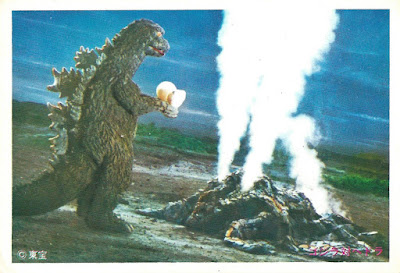 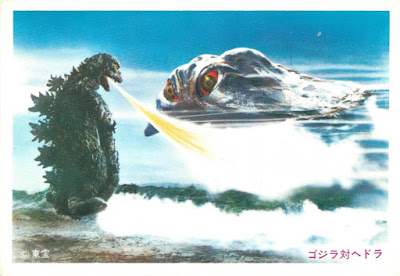 Next time, Part Two!
Posted by Sampoerna Quatrain at 06:42