The Abomination That Is the Singapore Godzilla Bootleg Coloring Book (1970s) 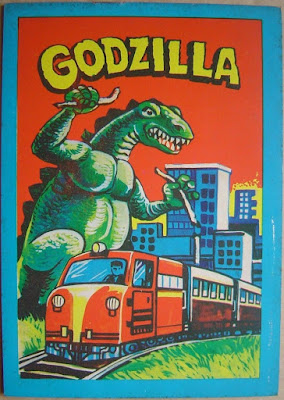 I don't usually do this, but it's been a mighty slow week, so here goes.  From the depths of E-bay comes this...thing you are about to see.  All I can tell you is that it is from Singapore, and from the late 1970's.  Everything else we will have to figure out as we go (such as who made it, how they got away with it, and WHY, oh WHY).
You can tell right away that we are going into the territory of Unlicensed Land...so far, it's not terrible, just slightly off.  If anything, Godzilla sort of looks like the generic rubber dinosaur figures that are still everywhere, to this day...and, also he is holding a boomerang. 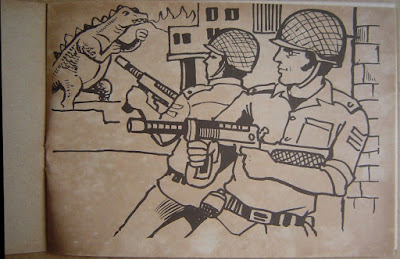 The first thing we learn is that coloring books in Singapore are bound at the top, much like American drawing or note pads.  Also, they have printing on one side of the page only.  One thing they have in common with their American counterparts is that their paper doesn't age well, as you can see in this photo.
Once again, nothing too abnormal, except the pointed dragon-plates on his back are starting to annoy me.  Also, Godzilla seems a bit small here...and it's possible that these soldiers haven't even noticed him yet. 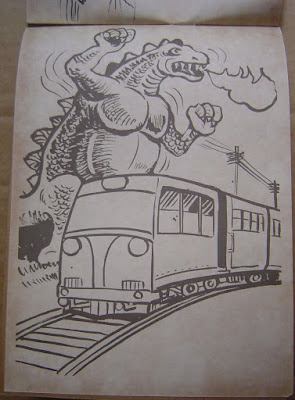 And, also like American coloring books, they give you your chance to color a similar scene from the cover, just with no boomerang.  (Also, no train driver, so I have questions.) 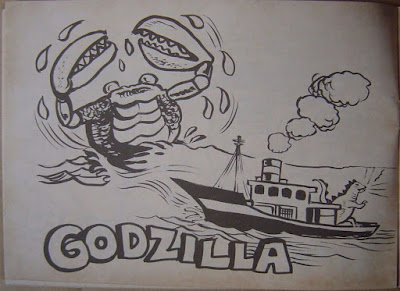 Now, we begin our slow descent into madness.  First off, what is going on here? Oh, wait, the "artist" probably saw GODZILLA vs. THE SEA MONSTER, right? No, I think the tiny Godzilla standing on the boat is our clue.  It's supposed to be Godzooky.  Therefore the date of "the 70's" that the seller gives us becomes "the late 70's," such as 1978 or 79.
It probably goes without saying, but the drops coming off the giant crab are so huge, it looks more like he is anxious instead of dripping.  Also, is it me, or does the GODZILLA logo seem to be floating in the water? What is it even there for? Have we forgotten what coloring book we are in, now that we are 3 pages in? 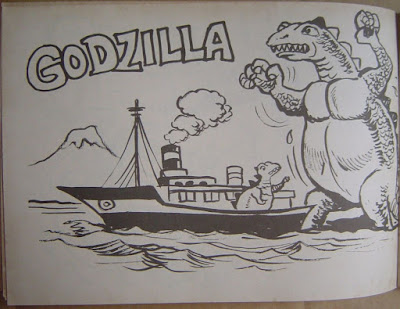 Wait a second, here he is now...and our logo has floated into the sky. 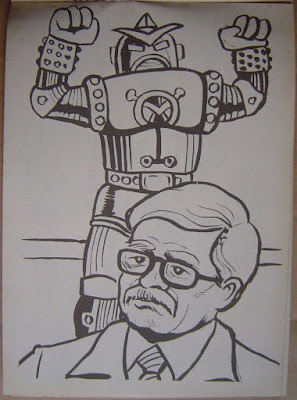 On the next page we have...hold on, here.  What do we have?  I thought we were loosely adapting the Hanna-Barbera series here.  Maybe this is a page from another book that slipped in? Professor Sadman and his Sado-Masico-Tron. 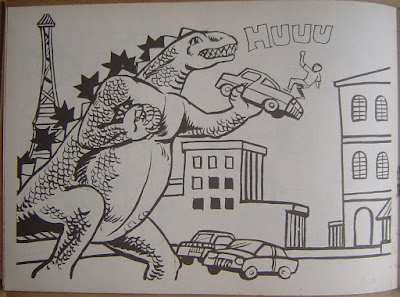 Silly me, I thought we were telling a story, here.  Suddenly Godzilla is rampaging the city, and toying with a man who is standing on the hood of his car.  Is Godzilla shouting "HUUU," or the guy? And what in the world???!
Notice that somebody has drawn more Godzilla-like plates on the back of our star, but didn't have the ability to erase, so they just put them on top of what was already there.  Sigh. 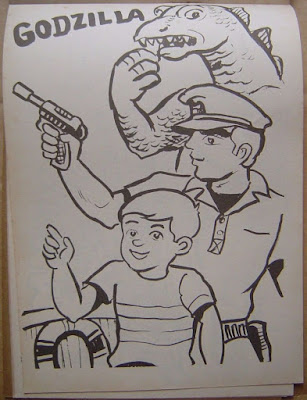 Don't worry, because Secret Agent Captain Anglo and Kenny are on the scene.  And don't look now, but Godzilla is right behind you!!! Nope, I think it's--again--supposed to be that lovable goofy miscreant, Godzooky.  If you ask me, it looks like Godzooky is shouting "GODZILLA"... 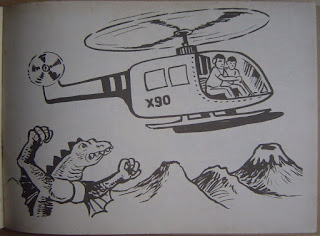 Then this happens.  We are in the mountains, there's a volcano, and somebody now has arm-fin wings.  Of course, Godzooky is supposed to, but as there is no quality control here, we can assume this is a complete accident....or another monster entirely.  That is only a torso.
But the X-90 is getting away! Or...the X-90 is safe once again! Or...however you want to look at it. 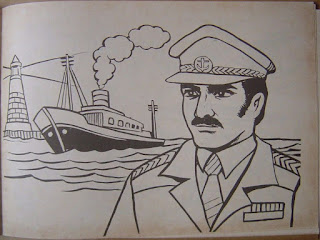 Next, we...hey, that's Major Talbot, who was a rival to Bruce Banner for Betty's affections, and later ended up marrying her.  Get out of here! 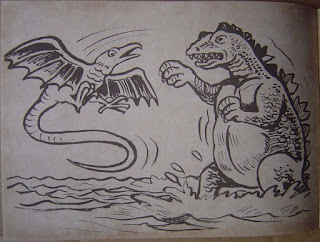 Now, back to this.  Godzilla (I think?) is back in the ocean, fighting either a winged snake, or a bird with a long tail.  I want to say that this is loosely based on one of the HB monsters of the week, in the way that you might come out of a three-day coke binge and try to remember the children's program you saw the previous Saturday morning, because you had to illustrate a bootleg coloring book about it....but couldn't quite recall it.
It's the closest thing to action so far, so we will have to run with it. 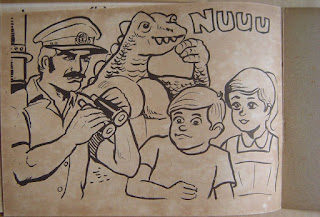 I have no idea if pages are missing, but this is supposed to be the "resolution" to our "story."  Either Godzilla is vanquished...or wait, maybe the snake-bat is vanquished.  Or, the X90 is once again safe.  Or, this random little girl just showed up.  Or, Kenny's seasickness is about to reach its breaking point.  Either way, we can join Godzooky in screaming "NUUU!!!"


Just so you know that I'm not going off the deep end here, this same manufacturer of Singaporian coloring books (who conveniently doesn't have their name anywhere on these products) also made other books, like Batman:
And, oh, heaven help us....Popeye.  You probably thought we were about done here.  I am going to go ahead and apologize in advance: 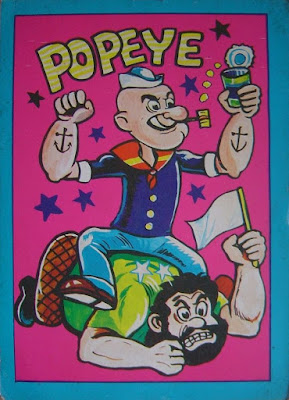 To me, slightly off-model is much, much scarier than "waaay off model," which can borderline on ridiculous.  It's like the "uncanny valley" that you read about, where CGI (for instance) is just close enough to a likeness to be creepy.  Of course, POPEYE WITH TWO OPEN EYES might have something to do with this... 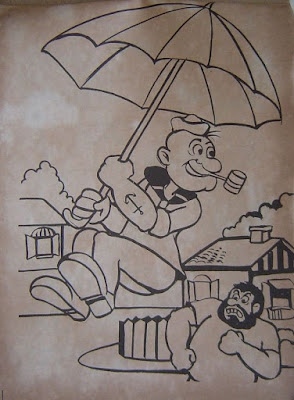 Do you remember that Popeye cartoon where he was taking a job as a family's new nanny, and he just floated in on his umbrella, and the kids loved him and sang annoying songs? Of course you don't, because that didn't happen.  AGAIN WITH THE EYES!
I know, friends.  We have gotten through THE SUPER DICTIONARY together, so we can't let this get the best of us, but I have to tell you, I am flagging.  In the name of all that is sweet and holy. What. Is. Going. On.....Here? Popeye looks like one of those dolls that have a shriveled apple for a head.  The kind old craft women make, and place next to their quilted broom cover that looks like a goose. 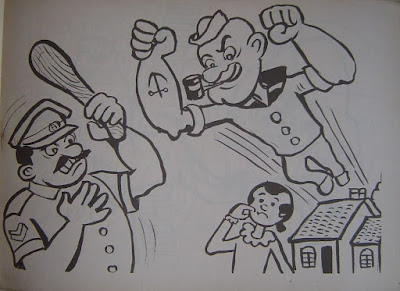 Again, I have no context to even venture a guess as to what is going on, I would only have you note that this man that our Sailor is attacking is some sort of law officer.  This is important, because on the next page... 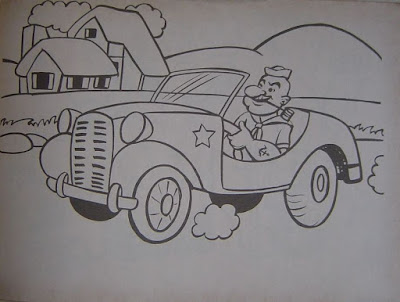 ...POPEYE HAS STOLEN HIS CAR.  And, he's quite proud of himself. And now, both eyes are closed.  Make up your minds. Also, I think the steering wheel is melting: 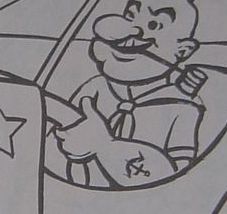 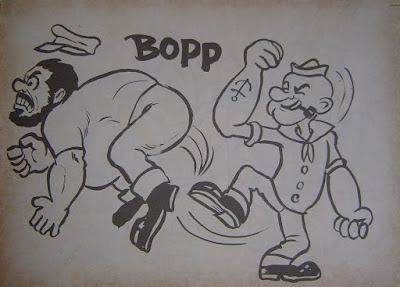 Then, the inevitable happens.  Bluto/Brutus punched (run POW through Babelfish, set to Singapore, and you get BOPP) by......Mr. Magoo? 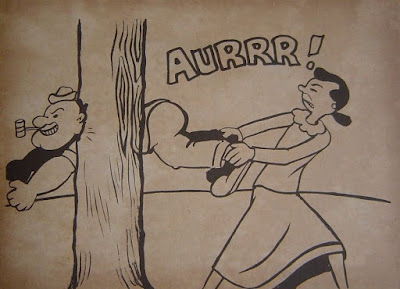