Here is a cool item, but it is a little confusing.  What I have is a strip of two adjacent 35mm film frames, bearing a cool promotional-art image of Godzilla and Godzooky.  One frame includes the title, and the second doesn't.

The seller had examples from several other shows from the same time period, including THE NEW SHMOO, CASPER AND THE ANGELS, TV movies, game shows, and even a MACY'S THANKSGIVING DAY PARADE.  In each case there were two frames, one with and one without titles. I am not sure that in every case, the two frames were connected, but they were in this example.

According to the seller's description:  "these would be projected onto the TV screen while the announcer commentates."
I recall these sorts of things being used on shows, but usually they were syndicated shows, where the local station was in control of the timeslot.  ("BATTLE OF THE PLANETS, at 3:30 today, on Super Station 7.") Also, they would add their own station information to the stills.

I don't believe that the Hanna-Barbera Godzilla was ever syndicated, (back in the day) but someone please correct me if I'm wrong on that.  It seems like that their agreement with Toho allowed for two Saturday morning seasons, used for a while (repackaged a couple of times, grouped with different other shows)...and then the show disappeared for several years, until Turner was able to show it again in the mid-to-late 90's.

So, lots of questions here:
1) Would these frames really be sent out to tons of TV stations, or would it make more sense for these to have originated from the source, such as NBC (via HB)?
2) Are they 35mm format specifically so that they can be made into slides? And why? 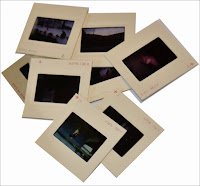 3) Is it suspicious that the two frames are together...meaning that they could have been clipped from a continuous piece of film, perhaps a short film of a bumper? Or, perhaps instead meaning that  this was the procedure for mass-production, and that two-frame segments were cut and sent out (going back to the theory that tons were sent out to local stations)?

Any insight into 1970's television production techniques, or any other relevant ideas at all, are greatly appreciated!
Posted by Sampoerna Quatrain at 08:33

Slides shown on stations were technically placed in usual slide holders and placed in a drum-like cylinder used by a telecine camera during broadcast. Here's a pic of such a device.
https://history.capitolbroadcasting.com/media-assets/wral-tv-film-chain/large/large.jpg

Fascinating. Never knew what one of those machines looked like!

I accidentally deleted your other comment trying to highlight it (on a tablet, DOH!), you were saying you thought these were sent out to individual stations? Id like to read the rest of it if you wouldnt mind re-posting it. "Sorry about that" (Don Adams voice)
Thanks Oldskoolfan!

Yeah, I was talking about what are called "Press Kits". These would usually be material relating to whatever program or film is being released. Oftening containing synophsis, general ideas as well as visual aides like with the use of publicity stills and slides.
https://en.m.wikipedia.org/wiki/Press_kit

Thanks! Makes sense, TV versions of press kits. Wish I could get my hands on the rest of the one for the HB Godzilla!