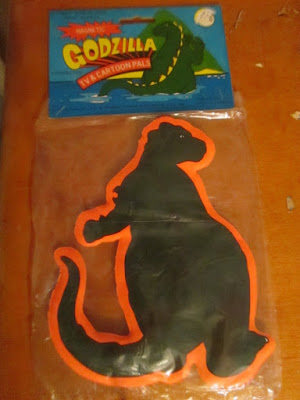 You have to take this item with a grain of "Why?" because I can assure you, even in the late 1970's, a Jumbo Puffy Magnet caused consternation.  Yes, Puffy Stickers were a thing, and Character Magnets had long been a thing, but someone decided to combine the two, and this was the result.

An unopened one has been a minor "grail" item for me for several years now, in that the last packaged specimen eluded me:
When this one appeared, I leaped upon it, and I'm glad to say, it featured the much-preferred Godzilla.  "Jumbo" is a good word, and should be in the title.  The whole thing with header card measures 11.5" tall.  Apparently though, like the Puffy Stickers this nameless company also made, these were offered in different sizes.  About a week later, a loose example came up that I also bought, and it was much smaller:
I do have one other loose example, which is also the "Jumbo" size.  It was in a display header card from an old gumball machine. It's elsewhere on this blog, but for completeness: 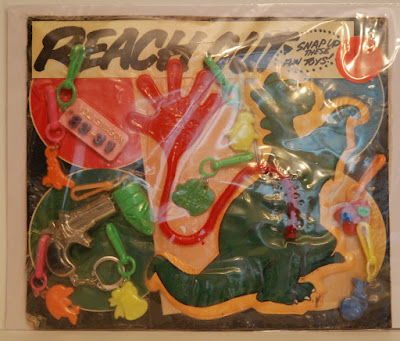 Back to the packaged Jumbo specimen at hand, here is a bit better photo of the header card: 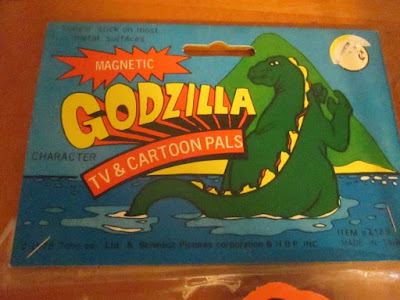 On both this, as well as the packaged Godzooky specimen, the Item Number has a (reproduced) first digit that is written in, so there was some sort of running change or error in the numbering. 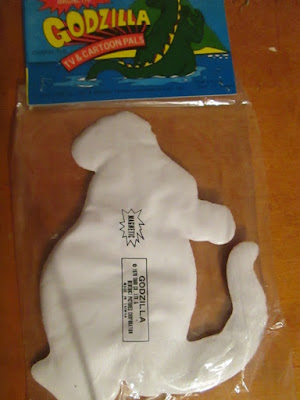 The magnets are pretty weak.  The small Godzooky will stick to the refrigerator, but needs to be undisturbed to stay up there, and would never hold up a sheet of paper.

Another "most wanted" item checked off.  Now, "KING OF THE MONSTERS Pressbook" moves to the top of the list.
Posted by Sampoerna Quatrain at 08:12