Today we wrap up the entire decade of the 1960's, showing the last third of official American Godzilla items produced! 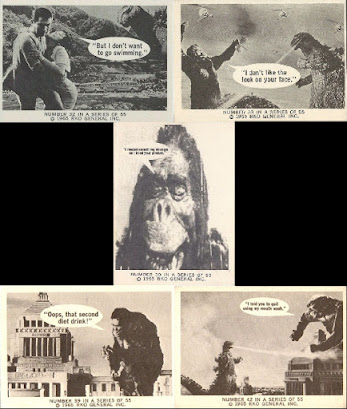 Here are the five remaining cards from the Donruss King Kong series, which include #32, 33, 38, 39, and 42. As I pointed out last time, #32 doesn't even have Kong in sight, so that was a very interesting choice (as well as a pre-supplied lobby card promotional photo that took no additional effort, so draw your own conclusions). Like many other monster cards of the era, this series had the blight of "goofy captions," which were a silly product of the times. (Don't get me wrong: I'd trade now for then.) 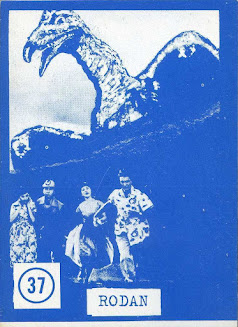 Almost an honorable mention, because Godzilla doesn't appear in this strange, "lo-fi" series, but Rodan does, so it's included here (this photo gives me GIANT CLAW flashbacks, though).  There was debate whether this cheap-feeling series was really official or not for some years.  While all trading cards were cheap to produce, they were not all equally licensed!
"Godzilla's Go Kart All Plastic Assembly Kit" (Aurora, 1966) 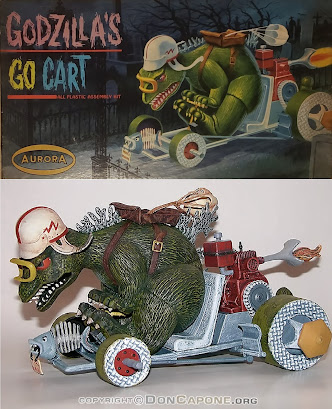 While the first Aurora kit is the symbol of American Godzilla merchandise, this, then, is the "holy grail."  Take everything I said about the rising values of the first Aurora kit, and quintuple it.  Now, roll a 20-sided die, and multiply everything by the number you get.  Take the nostalgia recipe I mentioned before, and stir in the mid-60's "hot rod" craze, and now you have a deadly potion that will stop the most steadfast collectors in their tracks!
I'd like to say you may even ever see one of these in your life, but I doubt it.  In the last 20+ years of collecting, I have seen one empty box on Ebay (sold for over $1,000 in 2012 or so), and one completed model as in the photo above, but not nearly as well-painted (and I don't remember it selling? It would today!).  [Edit: a built-up and painted model with no box or instructions sold for $2025 on November 21, 2021.]
It was part of an entire series of "monster kart" kits (all equally ridiculous) that included Dracula, the Mummy, and King Kong, and if nothing else, it's an interesting early example of grouping Godzilla in with the American movie monster pantheon, which became a commonplace practice by the 1970's.  Over the years, the there has been a theory that Toho shut down production of this model, but that isn't true.  Still, it quickly disappeared.  In 2000, Polar Lights reissued the kit and removed Godzilla's name, and Toho did object to that one, so maybe this is where some of the confusion comes in.  The reissue has become an important placeholder for many collectors! [Edit, again:  In December 2021, Polar Lights again re-issued the kit, this time under its full name!] 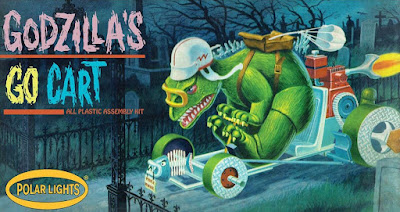 Does it go without saying that, if you have one of these for sale, I'd like you to contact me, so I can complete my entire 1960's Godzilla decade? ...No? ...Anyone?
"Godzilla Bicycle License Plate" (Marx, 1967) 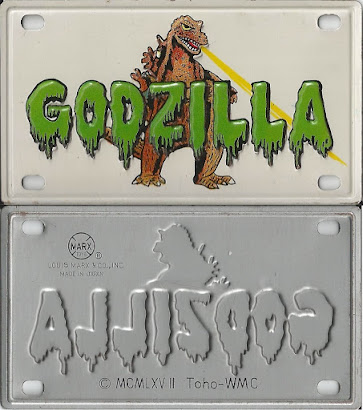 This embossed beauty is as equally rare as some of the above pieces that we've discussed, but doesn't quite command the Aurora-level prices like black market organs do.  Made by the great Louis Marx company (another name that ensures love--and resale values--among collectors), it's said that distribution on these were quite low, and that they were more common in the north, toward Canada.  The rest of the line included characters from Marvel, DC, Jay Ward, Disney, and....Soupy Sales (huh?), and you know what would have been on my bicycle.  But, luckily, this one wasn't, or it wouldn't have survived nearly so well.
"Godzilla All Plastic Assembly Kit: Glow in the Dark" (Aurora, 1969)

Oh no, we are ending the decade with another Aurora model kit! The first Aurora kit was wisely reissued in 1969, and was pretty much identical, only this time, a sprue of interchangeable glow-in-the-dark parts were included, allowing you to switch out Godzilla's head, hands, fins, tail, and nameplate.  Before you give this a 21st-Century "meh," imagine going to sleep as a tyke in that era, and when the lights went out, there was Godzilla, glowing monstrously at your bedside! Now, that is cool.
It's not pertinent to these articles to mention that this version of the kit was reissued in 1972, but it is important to point out that the boxes are slightly different.  The 1969 kit comes in a "hard box," while the 1972 comes in a thinner one.  None of this helps you if you can't handle the item, or see enough of it (such as in an auction photo, or behind glass), so consult this post for the differences all the way around the two boxes.
Lastly, it probably goes without saying, but of the two glowing reissues, the 1969 kit is the more desirable.  While all vintage Godzilla kits are obviously valuable, the 1969 one is the one you want to track down, like yesterday.
We hope this journey through the 1960's has been educational.  I know that it was eye-opening to me, proving that although it was a comparatively small output, it was more than "a handful." (Maybe a small table-full.) There were a couple of unauthorized items I debated throwing in, but I wanted to keep the list as official as possible (besides, they are elsewhere on this blog).  The 1970's was when U.S. Godzilla merchandising really exploded--and,  come to think of it--when all merchandising really exploded.  That would be a long but interesting series of posts...the problem being, new stuff is still occasionally being discovered!
Posted by Sampoerna Quatrain at 09:24