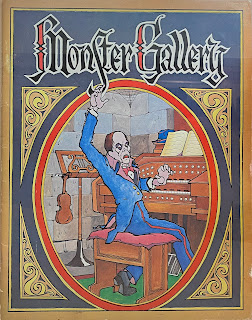 Here is a little-known item that vintage monster fans should know about.  This is a coloring book from 1973, but don't let those words fool you.  This is not average-sized, dollar-store, pulpy kids' fare.  Instead, this is a higher-end piece, printed on heavy stock that could probably withstand nicer markers or even watercolors.  Also, it's really big:  9.75 by 12.5 inches! Inside are 15 portraits of classic vintage monsters, as well as full-page summaries of their stories. 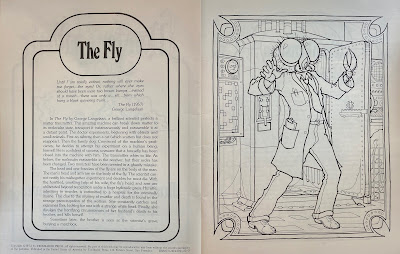 The illustrations are great, and obviously done (by Mark Savee) with knowledge of the subject matter.  They include lots of neat details, and often have intricate frame designs.  And, I should point out, aside from some brief copyright language by the publisher (which you can see above), there is no indication anywhere in the book that any of this was authorized at all or used with permission! And for the most part, they don't even try.  Which is good for us, of course! 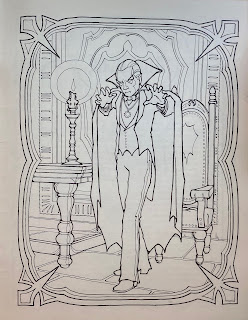 The monsters included are The Fly, Frankenstein's Monster, The Mummy, Creature From the Black Lagoon, Hunchback of Notre Dame (I never understood lumping him in with classic monsters...oh dear, I just realized I said lumping...many apologies for that one), Godzilla, Cyclops (another strange choice), Werewolf, The Abominable Snowman, Mr. Hyde, Phantom of the Opera, a Morlock (again, random!), "Vampire," King Kong, and the Bride of Frankenstein. 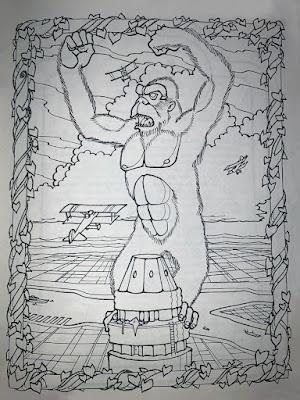 I would imagine this book was sold in specialty stores and in the back of monster magazines, which kept it away from the more mainstream eyes.  A clean, uncolored copy today goes for around $100.  A copy with a colored-in page or two can be $50.  And now, the star of our show: 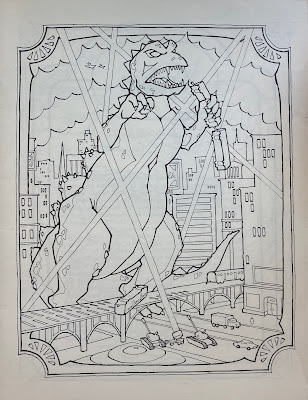 I think this is an interesting take on the big G; my problem with it is that the dorsal plates seem to turn into bumpy lumps the farther they go.  Close, but no cigar!  I must admit, I spent a bit of money on this post.  The book is far too big to scan, and if you were going to piecemeal it, who would buy a perfect copy just to disassemble it to fit it on a scanner, half at a time? So, I was determined it had to be photographed, which led me to constructing a sort of animation-stand type rig, where, using a tripod attachment that I purchased (which came with a handy remote), I was able to photograph all of the pages under a sheet of plexiglass.   It's not 100% perfect, but pretty close, and as scanned copies of this rare book don't appear to exist anywhere, I did the best I could.  That said, you can now download the whole thing in its entirety, preserved here for posterity! Enjoy!
MONSTER GALLERY Coloring Book (1973) 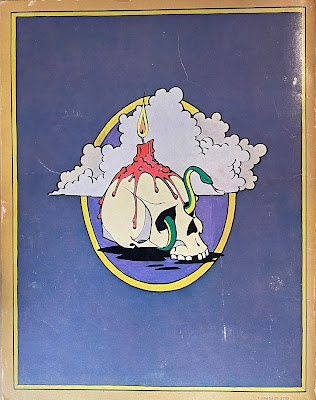 ADDENDUM! Tonight I was watching a video on YouTube about a rip-off line of Mego-sized dolls from Tomland Toys called FAMOUS MONSTERS OF LEGEND that came out in the late 1970's (the cardback I saw was dated 1980)...suddenly it dawned on me where I'd seen the artwork before, for four of the figures. Take a look and see for yourself! This was a rip-off of 1)FAMOUS MONSTERS magazine, 2) several film franchises, and 3) the Monster Gallery coloring book, all at once!

Posted by Sampoerna Quatrain at 08:42

Thanks for the scans here, helping to preserve things against time for a bit.
Guess that take on the Big G was their way of avoiding the copyright or such.