This one is a little confusing, since it clearly says KELLOGG'S on the front, but they were the original sponsor of the 1940's mega-hit radio show, four episodes of which are featured on this album. What confuses me is the origin of the vinyl--whether it was available in stores, or as a cereal mail-away promotion in 1974. Nevertheless, I have three volumes. 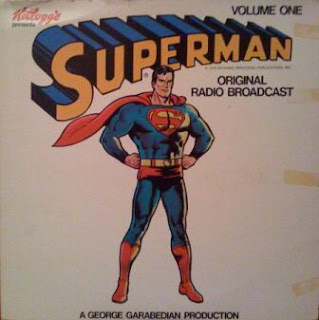 Posted by Sampoerna Quatrain at 18:49

I can clear up that mystery for you a bit; the records were in fact promo LPs that you could obtain by sending in boxtops (along with a little additional money) from Kellog's Corn Flakes in 1974. I think they were also remaindered to the Publisher's Clearing House catalog after that, but my memory is fuzzy there.

The reason I know this is because I begged & pleaded w/ my parents for the complete 4-volume set at the age of 5 & still have my original copies (w/ some hand coloring added here & there). Though the regular mentioning of "Kellog's Pep" in the episodes kinda confused me at the time ("Why aren't they saying Corn Flakes?" I remember asking), these certainly got a lot of turntable time in my room.

are these albums worth much?
I have a set also

I've got the set of four, too, in LP form (could you post vol. 4 here?) and though my mother sent for them, I think the price was reasonable, even then. A trip down the lane to a cereal box collector site might clarify things and even possibly turn up a repro of the box itself. Circa 1974 sounds about right. Probably advertised on Corn Flakes.