A Musical Mystery! (Can You Solve It?)

Many of the albums I've been discussing here recently came from the contents of a storage building belonging to my late uncle.  Among the 1,000 or so albums I went through was  this one oddity:  a ten-inch, one-sided "acetate" of sorts that was in a torn paper sleeve (from a 12" album).  It was sitting on the lowest shelf, against the floor, and had accumulated years of dirt and dust.
Upon initially examining it, I decided it must be a vanity record, made by a vacationer in one of those types of studios that used to exist in decades past (some were booths, where you would pay money, go into the booth, record a track, and leave with a one-of-a-kind record to take home or give as a gift).  It was only days later that I got a really good look at it.  One side is completely smooth; the other, where the grooves are, has a typed paper label.  The disc itself is apparently made out of shellac, over a metal plate.  The metal plate is bent slightly, and (especially on the underside) the shellac is cracked pretty seriously.
The amazing thing is, none of this affects the playing of the record at all! After I washed it, I realized that the damage ended before the grooves began, and that it may not destroy my stylus after all to play it!
But before we get to that, a word about the label itself, and what I was able to find out. 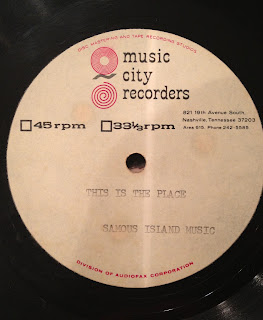 As you can see, the only information that is given are two lines.  First, the title of "This Is The Place," and second, "Samous Island Music." That's it.  No artist name, no writer, no running time, no year.  It doesn't even tell you whether the recording is 33 1/3 or 45 rpm (I believe it was 45). I learned quickly that even though the name "Music City Recorders" sounds a little generic, it was actually a recording studio in Nashville that was founded by Elvis' guitarist, Scotty Moore, in 1964.  Several big names have recorded there, including Ringo Starr, who did his whole "Beaucoups of Blues" album there in 1970.  In 1975, the studio changed hands, and later, it became "Studio 19," as it exists today. In fact, I emailed Larry Rogers, a nice fellow who runs the studio, and sent him the photo and mp3.  Unfortunately, he wasn't able to supply any further information, so the mystery continues.  Also, he agreed with my assumption that "Samous  Island Music" must be a typo.  I've searched everywhere I can think of:  ASCAP, Discogs, even commercial sites like Amazon, YouTube, and that sort of thing, and I can't find any further information on either line of type.  (By the way, there is a Greek island called SAMOS ISLAND that Internet searches keep defaulting to, which is quite frustrating!) There were several songs entitled "This Is The Place" that simply didn't fit, either because of the date or some other such reason.
So, to recap...we have a mystery record that is most certainly not a home-made recording, but a professional demo of some sort, done in a professional studio, sung and played professionally, and probably between 1964 and 1975.  The publisher is probably "Famous Island Music," and besides the song title, that's all we know.
The record did indeed play.  I was able to clean it up to an extent, but any further filtering took away from the sound, and there's quite a bit of surface noise present, but what should we expect, for a record stored in this manner for so long?!
So how did it end up in my uncle's storage building? I know that he frequented record conventions, and from all the albums I went through, I doubt he really knew exactly what he had, so who knows.
With all of that said, I leave any further revelations up to Sphinx patrons.  If you are holding any secrets about this disc, the song, the writer, or the singer, please contact me, and they will be shared here. Thanks! In the meantime, simply enjoy the mystery...
Posted by Sampoerna Quatrain at 11:30

It's fun to find such mysterious recordings.

Great story! I love this stuff.
I just featured one of these myself. Mine is clearly just some guy in his living room singing and playing the piano. Also a mystery song that i've been trying to figure out. I think mine goes back to the late 40s/early 50s, but its just a guess.

It seems like you might have an actual recording by an actual somebody here... I hope you're able to figure out who it is.
Good luck.

I think I have one of those Audiodisc recordings I found of someone giving a lecture on Nova Scotia. These are certainly home-made recordings. Too bad my mom didn't have a machine like that at her disposal, but she did record her singing voice in one of those "make your own record" booths I have in my collection.